I needed some vehicles for my objective markers and Land Rovers were something I'd been planning to 3D print for a while.  I decided on some of M_Bergman's excellent 1:100 models, in this instance the short wheel base Land Rover 90 pickup version (so called because in real life it's 90 inches long).

I painted up a couple for my little dioramas, one in GW base blue, the other Vallejo reflective green.  I have another 2 that are crying out for recoiless rifles or an HMGs on the back as technicals. 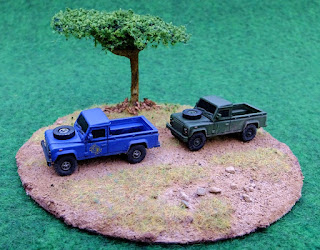 The blue Land Rover as featured in my archaeological objective marker is based on the one seen in some episodes of Time Team.  I attempted the Time Team logo on the door and it didn't turn out too bad.  The real one is a standard hardtop rather than a pickup but I wanted this version for my little scene. 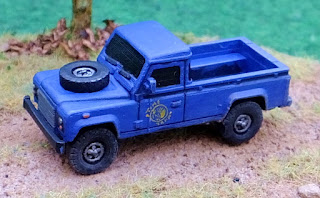 The Land Rover 90 comes in a huge range of colour schemes, I adopted the grey front grille and headlight surround, though once I'd given it a shading wash it looks almost black anyway. 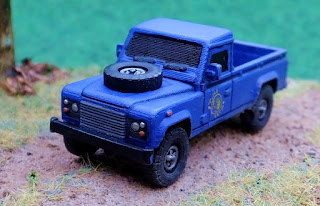 There's a nice amount of detail in this model, with the correct light clusters and even a little number plate.  I gave it a pinwash of dilute black ink and a drybrush of dusty brown to finish it off. 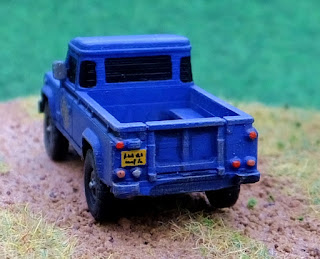 The green colour is a fairly standard Land Rover colour that will work for either a civilian vehicle or a military one.  I found that Vallejo Reflective Green seemed just the right colour for this. 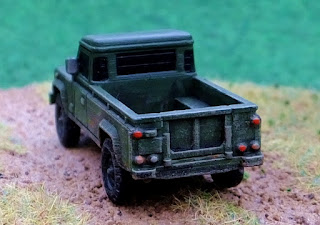 I gave it the same dark shading wash to selected areas and a dusty drybrush.  This one got some extra brown drybrushing up the sides and back for a more used look than the blue version. 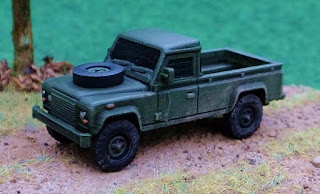 This one will appear in one of the later objective markers.