Well, this is my second try at writing this post - I was just about to publish it when something happened to Blogger and the whole thing irretrievably vanished! 2 hours work lost but hopefully this re-written version won't prove too disjointed and rushed...

My initial batch of hedges are extremely neat but I'd like some rougher ones for more rural scenery.

I started by cutting strips of pan scourer the same size as the original hedges.  These were then cut into a wavy shape but keepng the ends the original height.  This will ensure they all fit together neatly and will also enable me to incorporate the neat hedges should I need them.  I chopped out the top from a variety of angles so it isn't completely flat.  I also pulled tufts out from the sides so that the width is a bit more variable.

I wanted a few trees to break up the hedgeline, these are all Woodland Scenics armatures from their small-medium tree pack.

Bases were cut from 2mm foamex and shaped at the ends so they'll fit together either straight on or at right angles.  Edges were trimmed slightly wavy and then bevelled.  Trees and hedge strips were hot glued into position and brown acrylic caulk smeared on to provide a good base for painting. 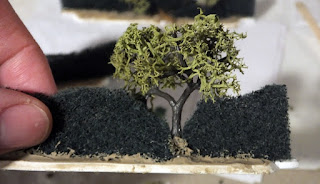 I trimmed the hedge down either side of the trees to make it easier to attach branches and foliage. 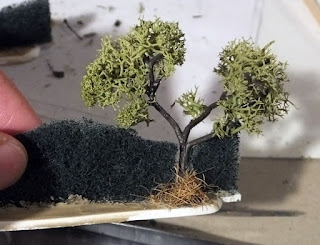 Reindeer lichen (Cladonia rangiferina) was glued onto the tree armatures to create the branch structure.  This is the first time I've tried this but it seems to have worked well. Patches of brambles were created with finely chopped coir/coconut fibre from hanging basket liner.

Additional bits of clump foliage were glued onto the hedges here and there to break up the shape a bit more. 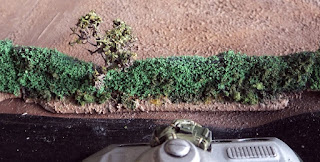 The base received a coat of textured paint, then Nutmeg Spice and Coffee brown with a Desert Sand drybrush (all Wilko tester pots).

The hedges were slathered in watered down PVA which I squeezed through them before I sprinkled with fine green foam turf.  A few patches were given some extra drops of glue and some darker brown-green flock was added.

The trees were painted a variety of cheap acrylic craft colours, mainly taupe, grey and burnt umber.  Reindeer lichen was painted in the same colours but with equal amounts of PVA added.  The paint/glue mixture was applied using a sponge which allowed me to coat the lichen well but without damaging it.  The sponge also drew off the excess so that the fine detail of the structure wasn't obscured. 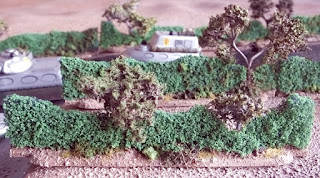 After the trees had dried, the paint/glue mix had added a fair amount of rigidity to the Reindeer lichen.  PVA was dabbed over them and a range of different flocks were used: foam flock in various sizes; green-dyed tea-leaves; green-dyed finely ground garden leaves.  The real leaves seem to have worked best. 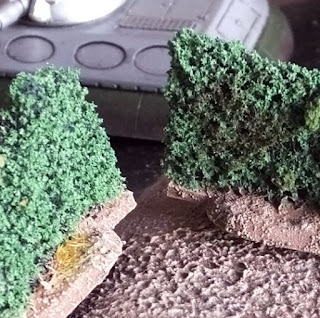 More watered down PVA was dripped trough the trees to fix the flock firmly in place and add even more rigidity to the branch structure.

I took a few pinches from all the different colours of foam clump foliage I've made and mixed them all together.  PVA was dabbed along the bottom of the hedges and little sprinkles of this mixed foliage attached. 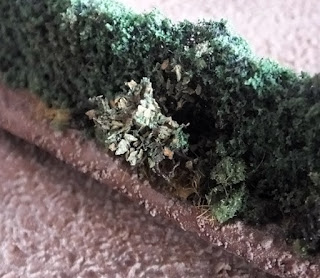 A few bits of Reindere lichen were also glued into the sides of the hedges, these were painted and flocked the same as the trees to create smaller shrubs.

The coconut fibre brambles were coated in PVA and green dyed tea-leaves of very fine dark flock used for their leaves. A few patches of green tea leaves were also PVA'd along the bottom of the hedges. 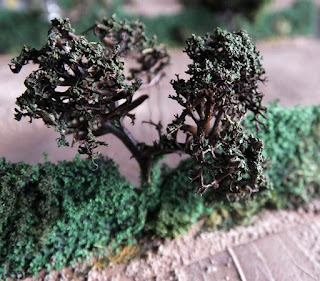 The finishing touch was a sprinkling of static grass here and there at the base of the hedge. 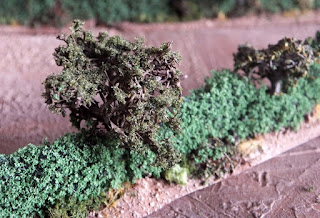 These hedges have turned out pretty well, if I do some more I'll probably try to vary the width slightly more and I need to make at least a couple of sections with gates in them.

I'm particularly pleased with the Reindere lichen, it has turned out to be surprisingly rigid once coated with paint & PVA so I'll definitely be using that more when I build trees in the future.

The hedges will be excellent for blocking line of sight for infantry but are still low enough for vehicles to see over. 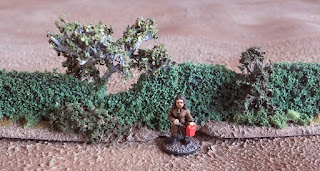 Now I just need to fit in a game or two to make use of them! 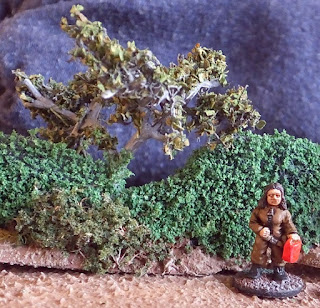 This is the last part of my Summer of Scenery.  Yes, I know that it's Autumn now but these projects all got started in the Summer.  Various circumstances delayed publication but I have more plans that should come to fruition over the next few weeks...

Several years ago (was it really 2013?!) I started on some hedges and the other day I came across them in a box and decided I should probably finish them.

Forgive the duplicate photographs fom the original posts but this was the project so far:

I got as far as flocking the hedges (squirted with PVA then squeezed through to coat all sides before sprinkling with fine foam turf flock), but then the project stalled as I wondered what would be the best thing to use for basing them.
MDF seemed a bit too awkward to cut to a suitable size and I was worried about warping or delamination of the edges and whether it would be so chunky that it would overwhelm the hedges. I also considered a more minimalist approach, just using a large washer 1/4 of the way from each end but I wasn't sure how to fix them securely.

7 years of prevaricating is long enough so I've finally pulled my finger out and got on with it.  2mm foamex sheet was easy to cut in thin strips and is not so thick that it is particularly noticeable.  It won't warp when textured and painted.  I cut the strips to about 15mm so that the 5mm hedge will occupy the central 1/3.  The edges are trimmed slightly to a bevelled, wavy finish and the ends are cut down to allow hedges to fit end-on or with a right angle corner.

Hedges were hot-glued in place, then the top of the bases received a thin smear of brown acrylic sealant.  Once that had dried, brown texture paint (brown paint, ready-mixed filler, sand & PVA) was daubed all over the bases.

The usual Wilko emulsion Nutmeg Spice/Coffee was painted onto the base and drybrushed with Desert Sand so that they'll match my usual gaming mat.

These have turned out fine, so next up will be some slightly rougher countryside hedges in contrast to these neatly trimmed ones.  If I made a few more shorter sections of neat hedge too, I could make a nice maze, perhaps with a topiary sculpture in the middle...

Previously on Escape from Zombie Island...

Now we return to the action, with the security team speeding towards the docks.  Hurtling towards them is an articulated lorry driven by one of the escape boat crew.  With both drivers travelling at speed and distracted by zombies clinging to their vehicles, disaster seems inevitable...

For now, at least, the remaining survivors are safe...