A couple of my more recent projects... 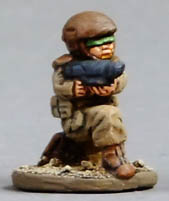 Islamic Federation trooper from the "kneeling and prone" set.  A dusty yellow/brown palette for a desert feel. 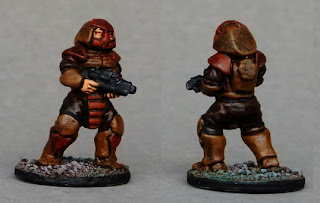 Japanese Corporate trooper.  I've aimed for a Samurai sort of colouring to match the style of the armour, a mix of medium brown, red-brown and dark brown.  My research wasn't very detailed though, so apologies to real Samurai reading this!!
Posted by Paul at 22:22 3 comments:

Ground Zero Games’ “New Anglian Confederation Gurkhas” have a very WWII 14th army feel to them I thought.  14th Army included the Chindits and fought in Burma, and I can just see these guys creeping through the jungle...

Inspired by this, I’ve gone for quite a restrained 1940s style colour scheme.  Basic uniform colour is Humbrol acrylic 86 olive green.  Webbing has been painted in Humbrol 93 matt desert yellow.  I gave the whole figure a wash of diluted Vallejo sepia ink, followed by a drybrush of the base colours in the appropriate areas.  Webbing received a further highlight of Vallejo bonewhite.  Flesh is my special flesh mix with a wash of GW flesh wash, highlighted with the basic flesh tone.  It's come out a little bright for real Gurkhas but never mind!  Weapons and boots are Humbrol 33 matt black with a light drybrush of Humbrol 32 dark grey to bring out the detail.

I like these figures.  In general the poses are good, the only slight disappointment being the squad leader; he does look rather like he’s dancing rather than heroically leading his troops onwards.  I think it’s the positioning of the right foot.  The missile launcher is great, kneeling in a stable firing position with the basic LAW-type tube launcher clasped tightly to his shoulder.  They're not a slim as some more recent figures, but they don't look as over-fed as others have been!

All are wearing standard battle dress fatigues, some with the sleeves rolled up, adding to the hot & sweaty jungle feel.  They have webbing and backpacks with plenty of pouches for ammo and grenades.  They're obviously on a long patrol as they're carrying lots of kit.  It may sound odd, but I found their boots to be particularly satisfying!  They are sturdy and purposeful with fine detail on the laces and the ribbed toe areas.  All are wearing bush hats.

Most are carrying a chunky assault rifle/grenade launcher combo apart from the missile launcher mentioned above, and the SAW/LMG gunner with a standard NAC support weapon.  Being Gurkhas, it's a shame that none have their Kukri drawn.  They all have one in a big sheath on their belt, but it would have been nice if one was waving it in anger, especially as it's their trademark weapon.

Overall grade for these figures: A-

A nice mix of poses, plenty of character, although the officer's pose is a little awkward.  Equipment gives a suitable jungle feel, but a shame that none have a Kukri drawn.  Well worth a look if you're after some jungle troops or guerrilla fighters!
Posted by Paul at 21:11 2 comments:

One of the older sets of GZG figures I have is SG15-SFE5 Assault Team.  From their description, and proximity in the catalogue to SG15-SEF1 (Sci-Fi Egyptians with Jackal-Head helmets), I had assumed that they were probably Jon's version of the SG1 team from Stargate SG1.

Included in the pack you get 4 "grunts" of 2 designs, plus 4 character figures; Colonel O'Neill, Teal'c, Major Carter & Dr Jackson, all armed with FN P90s.  All have assault vests apart from Carter - who just has a vest!

The figures are nicely sculpted, although my Carter had a slightly squashed nose when she arrived.  I'm afraid my efforts to tidy this have not been especially successful, and she now looks worse than when she started.

All the figures tend towards the "well-fed" appearance of many of the earlier GZG figures, though it's most noticeable on the grunts.

It would have been nice to see Teal'c holding a staff weapon rather than a P90, but that's only a small grumble, and it wouldn't take much to convert him with a bit of brass rod and some epoxy putty.

I've painted them using Humbrol acrylics, matt black for the boots, vests & weapons with a heavy drybrush of 75 bronze green for the fatigues.

Overall grade for these figures: B

Full of character, though a little on the chunky side.  A greater variety of weapons might have been nice, though as you get 6 different sculpts in the pack the range of poses is good.
Posted by Paul at 12:28 2 comments:

The Interstellar Mining & Extraction Consortium does not always use high-tech ways of mining. When you're basically just digging a hole, there's still a place for the humble tipper-truck! 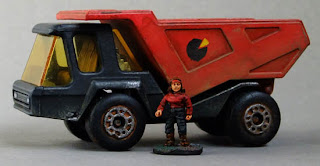 Chassis is Humbrol 33 black drybrushed with dark grey. The bin on the back is GW blood red with a wash of thinned sepia ink. IMEC logo was added using a stencil made using sellotape and a hole punch! 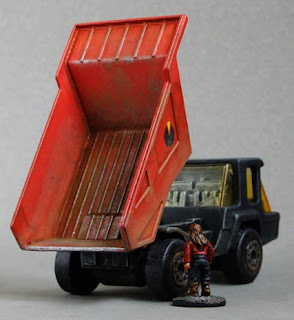 A drybrush of GW chainmail on some areas was followed by a good dusting of humbrol matt 93 desert yellow across much of the vehicle.

Some of the detail... this is the engine. 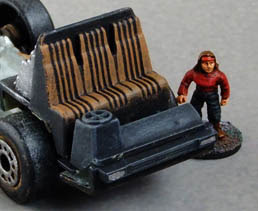 Here is the cab. Those seats don't look too comfy. 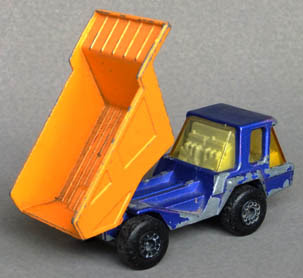 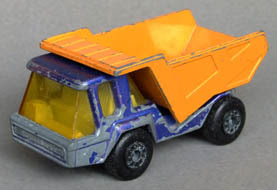 Showing the wear and tear from many happy childhood days playing in the garden!

Employees of the Interstellar Mining and Extraction Consortium wear distinctive red jackets with the IMEC logo on the back, plus black trousers and brown boots. Some also sport a baseball cap in the company colours.

IMEC originated as a smaller concern, the Pleiades Mining and Extraction Consortium, but has expanded into a multiplanetary operation as new partner organisations have joined the consortium. It is currently the largest mining group in human space, involved in a wide range of areas; asteroid mining in the oort clouds, cometary ice mining, HE3 extraction from gas giants and even something as basic as people on the ground with shovels and pick-axes.

Many planetary mining operations have a sizeable security contingent. Their operations on recently colonised world can lead to encounters with unfriendly wildlife or even bandits who suspect that something valuable is being mined.

My IMEC employees are all from GZG in the form of armed civilians/colonists, an unarmed civilian/colonist and a heavy weapons crewman. The heavy weapon crew in baseball caps make very good civilian techs/manual workers.

The IMEC logo is a black circle with a sector cut out (approximately the 1 o'clock to 2 o'clock part) and partially removed. This sector is yellow/gold in colour - the design symbolises IMEC's removal of the valuable resources from the black circle representing a planet.

This cargo loading droid has been sitting in my "works in progress" box for months, just waiting a few finishing touches. Here it is in action in the cargo bay.

I'm sure you recognise its origins! I found a couple reduced in Tesco one day and thought they'd come in handy. 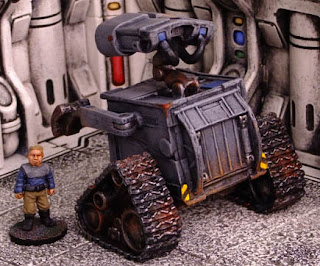 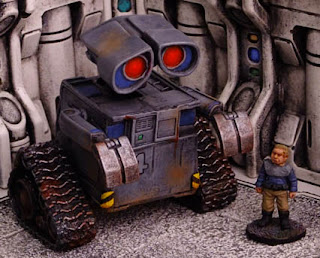 Laura (the wife) says that he still looks to cartooney - it's the droopy eyes that do it! 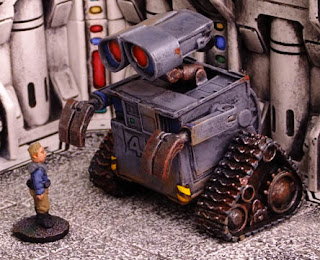 All the same, it'll make a good bit of cover for a shoot-out at the starport. I might make a few alterations to the other one.

Warhammer or Tomahawk - take your pick!

I've finally got around to painting my giant robot - either a 70-ton BattleTech Warhammer heavy BattleMech or a Robotech Tomahawk Destroid Mecha depending upon your point of view. 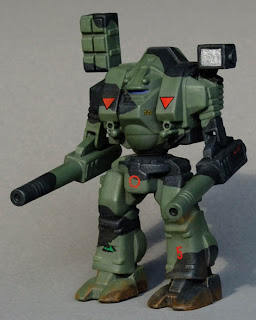 It didn't look very impressive when it arrived from e-bay, but I could see the potential... 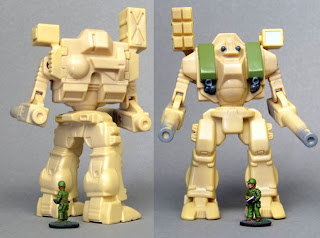 It's going to join my OUDF forces - see the trooper for scale. 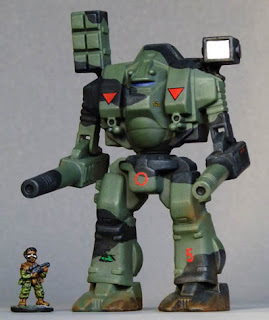 After a spray of dark grey car primer, the base coat is Humbrol acrylic 75 matt bronze green, ighlighted with 86 olive green. 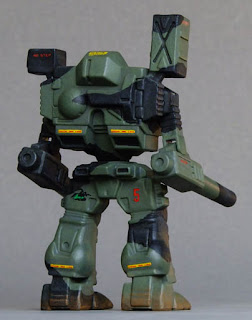 Camo stripes are Humbrol 33 matt black with humbrol 67 panzer grey drybrushing to show up the edges. 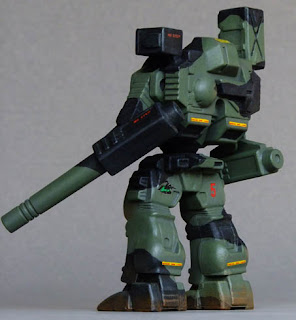 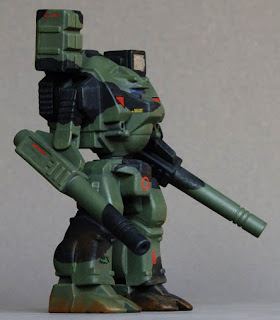 The arms and torso still twist, giving a nice range of poses. 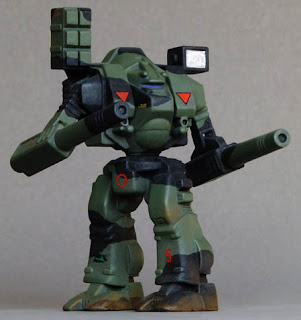 The UK temperate camouflage scheme fist in with my DLD AFVs 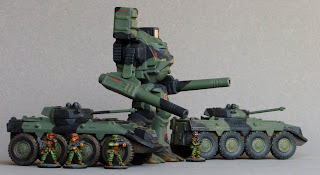 It's suitably imposing, but not so big that it's impractical on the tabletop.

A few close-ups of the transfers.

I think they add a nice finishing touch! 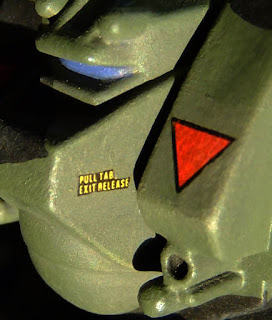 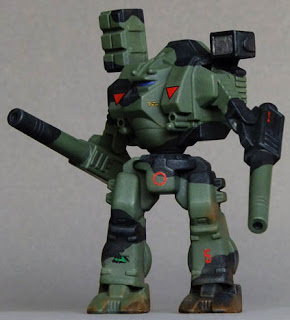 Messing around in boats

I produced this little vessel months ago but realised that I hadn't posted any pictures.

It's a from a Majorette set that included a car, trailer & boat. I lost the outboard long ago, but my bits box contained various useful bits and bobs. The jerrycan comes from a 1/72 Italeri accessory set.

The engine was some sort of component cover from a circuit board, luckily it's styrene so I can stick it easily with polycement. I've embellished it with a few plasticard scraps, including a plasticard circle produced using a hole-punch and very thin plastic.

Here's Grumpy the colonist demonstrating how a GZG figure can stand inside the boat. 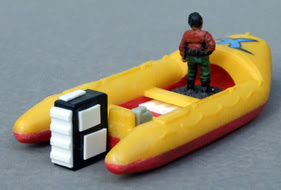 A couple of scummy low-tech rebels try out their boat. On isolated colony world such as Gordon's Gamble, grav vehicles aren't always available. Something as basic as an inflatable dinghy can provide a ready means of transport through rough terrain, even if it is restricted to the river. 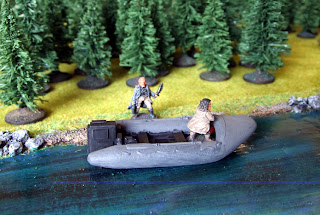 OK so it's not particularly inspired and is slightly out of scale, but it only took a few minutes to do, and it could provide a couple of adventure hooks - who can gain control of the vital ferry crossing in a battle between rebels and local militia? Can the rebels get to their boat and escape down the river before the Grav tanks catch it? Are the rebels luring the grav-tanks into a carefully prepared ambush, taking advantage of the overconfidence of the government forces with their apparent technical superiority..?
Posted by Paul at 21:10 1 comment: