Some more droids from GZG, pack SQ15-V16 Humanoid Bots.  I've gone for the standard gold protocol droid type colour scheme on the first two servant robots.  The photograph hasn't come out particularly well, they do look a lot golder in person!  I've used a dark brown base coat rather than black so that the contrast isn't so stark. 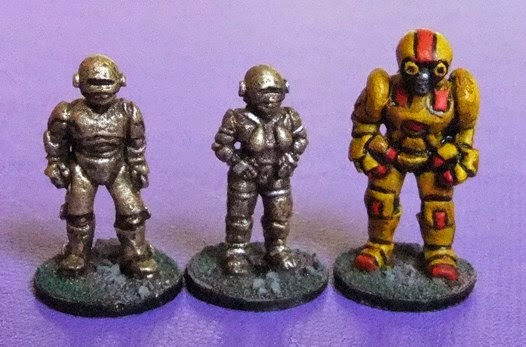 The big cargo handler droid has an industrial type yellow colour scheme.  I assume you'd want it to be easy to see when it's walking around carrying large objects. 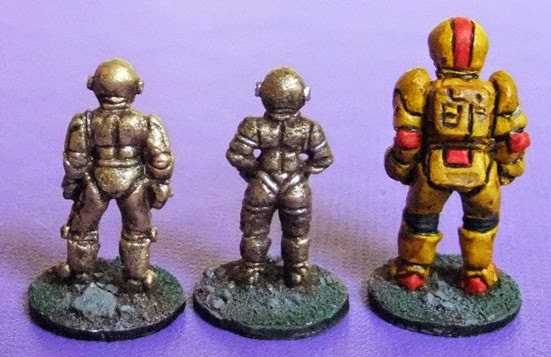 I'll be painting the duplicates in more varied colours, in particular I was thinking white/pink on the middle one for a Futurama style Fem-bot!
Posted by Paul at 09:53 2 comments:

Although Heroscape dice have similar symbols to the Heroquest dice, they aren't quite the same so I thought it would be good to try and create some more proper Heroquest dice.  Being a cheapskate, I want to spend as little money as possible so I decided that it was time to experiment with making my own dice.  I've read about it on various web sites but I wasn't sure how easy it would be in practice.


First stop was some dice.  I got 3 bags of 10 blank dice from Witzigs on Amazon for the bargain price of 99p per bag.  Next was some inkjet photo paper.  10 sheets of Polaroid inkjet paper from Poundland - ideal!


Third was to find some decent inages of the HQ dice.  I could have photographed/scanned mine but it only took a moment to find some images on the internet and copy/paste them into a larger image to fill a page.

The page of symbols was printed onto the photo paper using a laser printer.  Because I've used inkjet paper not laser paper, the ink stays on the surface coating.  Cut out the symbol, place face down on a blank side of the die, press with a hot iron for 5 seconds.. voila!  The piece of paper is now stuck to the die!  A gentle tug peels off the paper leaving the ink on the die.  The heat from the iron has caused the heat transfer ink to fuse with the surface of the die.  Some of the inkjet film is still stuck on top, leaving a faintly milky surface but a hard scrub with some soap and a scouring pad removes this fairly quickly.

Because this was the first try, the results aren't perfect.  Some of the symbols are off-centre and some have smudged because I wasn't sure how long to apply heat.  Despite this, as a proof-of-concept I'd say it's very succesful and once I've re-sized the symbols slightly I shall be producing some more dice.

Now I just need to think of what else I can do.  I'm thinking that casualty dice for Force on Force/Tomorrow's War will be useful.
Posted by Paul at 10:00 1 comment: