Although I have all the corridors and rooms I need from my Hirst Arts casting, additional furniture is always useful.  I discovered the Twisting Catacombs Kickstarter from Zealot Games a couple of days ago, lots of great furniture and other useful bits for anyone running a dungeon crawl. 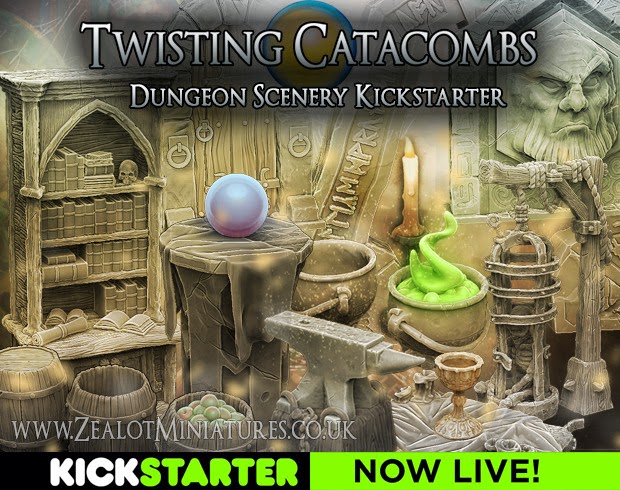 All my armoured vehicles are looking rather anonymous, lacking any sort of ID markings.  In order to correct this, I've been looking at various waterslide/dry-rub transfers (or decals if you prefer).  I do have a huge stock of old WWII markings and a few modern vehicles, but most of them look too.. well, too WWII really.  After perusing a range of web sites, I've settled on some Veni Vidi Vici transfers:

I need logos which can be used on a large number of vehicles - this swooping Eagle is just the sort of thing I'm after for my Neo Colonial Commonwealth marines, reflecting how they'll swoop down from orbit onto their enemies.  (OK, so the counter-insurgency fighting they've been involved in on Charity and Gordon's Gamble has made the "swooping" part rather difficult but you get the idea!)

I thought these wolves heads are different enough from the standard GW sort that I can use them without people going "Oh, Space Wolves!" when they see them!

Nice heraldic beasts, and this time available in 3 different sizes!  I would have gone with these designs for my NCC marines but I'd have needed so many sheets and would have ended up with so many unused ones that I used the Eagles instead.

How could I resist adding a set of biohazard/radiation/explosive/poison/electrocution/laser/low temp warning signs to my order?!


I liked these Lion's heads and the rampant Lion is nice too.  I was very impressed with the service - I ordered Sunday evening, had an e-mail Monday lunchtime to say they were in the post, envelope arrived Tuesday morning - excellent!  All the transfers I've shown above are available in a range of colours but I've mainly gone for simpler designs in plain black so that they'll be easier to see on the vehicles.

So, how do they look on the models?


I'm very pleased with them, now all I need to do is print some ID numbers onto the clear waterslide transfer paper I've bought - no-one had numbers in the font I wanted and because I want 3-part numbers, using ready-printed decals would have involved lots of individual numbers, trying to get them all lined up neatly.  Far easier to print my own - assuming it works!

I have used up a few of my old transfers too...

This small armoured river boat from The Scene has WWII German tank serial numbers, bow markings from a Hind-D gunship and a red triangle on the roof from a GW Space Marines transfer sheet.

My Spartan or Phalanx Destroid / Longbow BattleMech has a range of transfers from WWII German PzIII and an old GW Predator tank from the mid-1990s.  It still needs varnishing to hide the carrier film better!

All these transfers have been applied onto gloss Pledge/Future floor polish with some Humbrol Decalfix and a top coat of Pledge/Future to seal them in.
Posted by Paul at 16:54 No comments: