A couple more GZG colonists completed, in this case a both female. 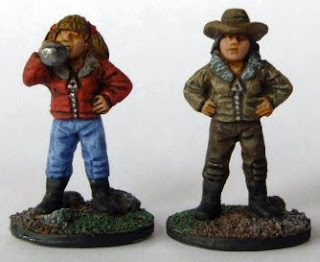 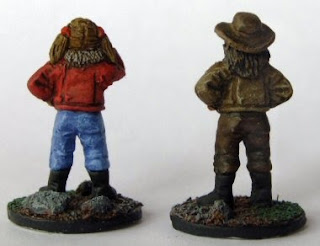 The other has Vallejo charred brown trousers and Humbrol 93 desert yellow jacket, both washed with Vallejo sepia ink. At this scale, the original result was too subtle and just blended into an overall brown when viewed at normal gaming distances, so the jacket received a lot of brybrushing with desert yellow and then with Vallejo bonewhite. The collar is Humbrol dark grey with a light grey drybrush. 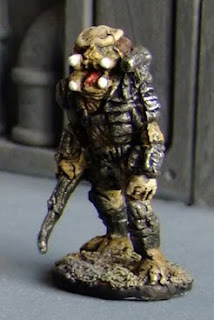 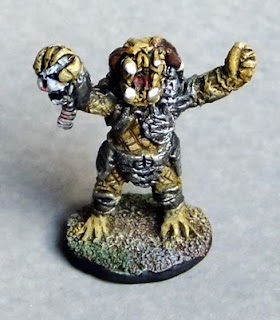 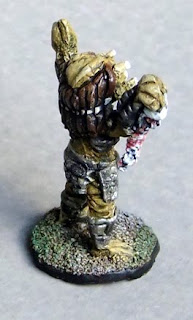 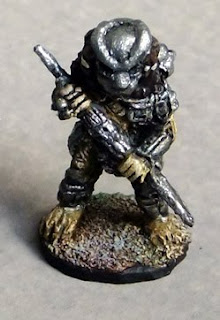 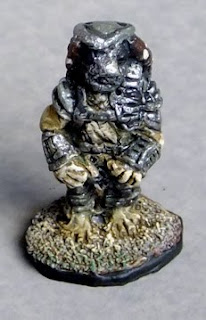 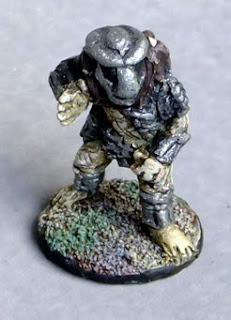 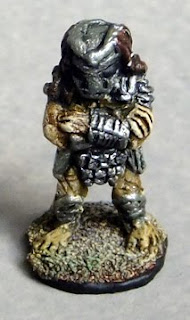 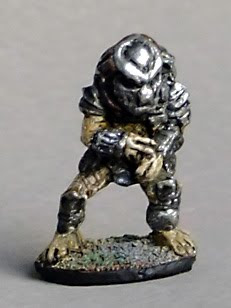 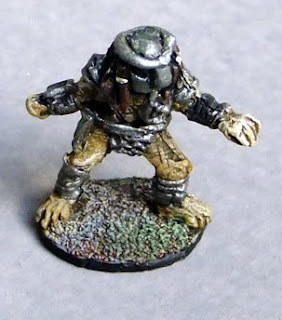 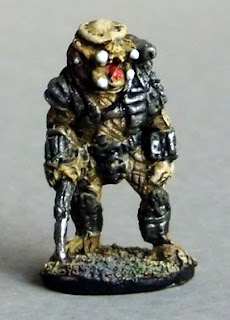 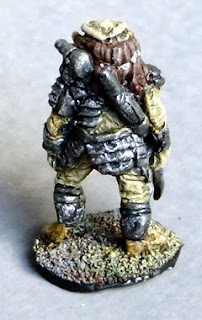 I recently got around to painting my Rebel Minis SWAT team. Overall I was rather disappointed with these figures. Although most of the poses are nice, with good detail (even down to a cross-hatched texture on the handgrips of holstered pistols!), the quality of the castings was poor, and some of the weapons are unidentifiable. For sci-fi figures this isn't such a problem, but for someone using modern small arms, I do think you should be able to see what they are holding.

There are a couple of odd choices - I think that the sniper figure would have been better in a kneeling position and the commander appears to be wearing a sun hat! I think that this was the LA SWAT team pack, but although it is sunny in LA, it's a bit out of keeping with the rest of the team. 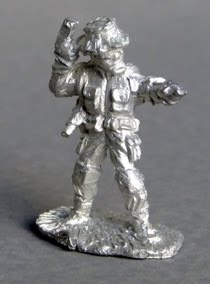 Although there was little or no flash, several of the figures suffered from very bad mould lines - see the commander below, with the mould-lines highlighted with red arrows. The bases were also very large and rather scruffy compared with most of the other Rebel Minis that I have. 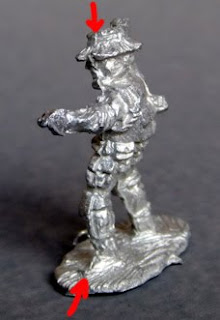 I felt that I couldn't use the commander as he was, so a head swap with a GZG separate head was required. I decided that a breather mask looked quite good, and was a suitable size match. The pistol was trimmed down, the original having been so thick that it looked like he was holding a brick, and the base was cut down and filed thinner before gluing onto one of my usual M6 washer bases. Here you can see the modified figure alongside a fresh-from-the-packet friend. 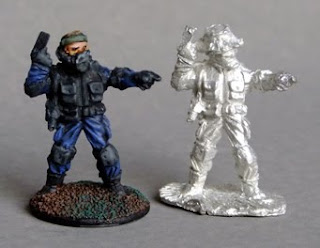 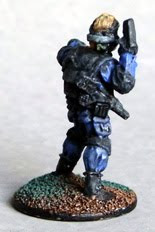 A rear view of the commander - is that supposed to be an M4 assault carbine slung over his shoulder? 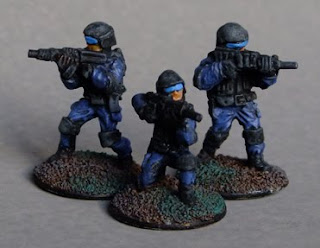 Three other members of the team. Left to right they have MP5 (?), M4 or M16, unidentifiable weapon (possibly some sort of shotgun?). Humbrol matt 33 black basecoat was followed by Humbrol 32 dark grey drybrush over assault vests, helmets, weapons, boots and kneepads. Trousers and sleeves are Humbrol 105 Oxford blue with Humbrol 25 blue drybrush. Flesh is my own flesh mix with a GW flesh wash to shade. Visors/goggles are GW enchanted blue (I have 2 post from many years ago when their colour matching was very poor - these are so different that I can use one as a base and the other to highlight!). 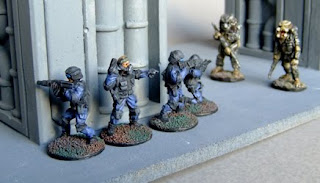 SWAT in action against some LKM Skullhunters (ie. Predators).

Overall rating for these figures: C-

Great poses and detail, but let down by poor casting and unidentifiable weaponry. A good result when finished, but they required a lot of work to get there compared to most other figures I have.

Final note: I have had a check on Rebel Minis site more recently, and it looks like the figures that I bought are no longer available. I think that they have changed the castings for both their LA SWAT team and their standard SWAT team - in fact it looks like some of the same figures appear in both.