Storage conainers are always handy bits of scenery to have, they block line-of-sight and can sometimes be useful as objectives for a scenario.  These are MDF, from the now sadly defunct Mad Mecha Guy, and have doors you can glue open or closed.  Quite a few of mine are painted in Interstellar Mining & Extraction Consortium livery but these ones I've done in a more generic blue colour.

Wilko emusion tester pots were used, the basic blue was quite strong but a splash of white mixed in toned it down nicely.  A light drybrush of desert sand gives a suitably dusty, used finish 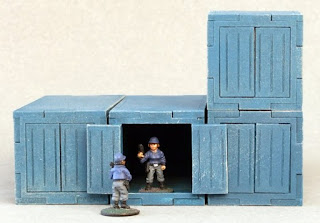 Rummaging in the loft the other day, I found my box of "gothic scatter scenery".  This was a load of stuff I assembled from Hirst Arts blocks probably 15+ years ago for small-scale skirmish gaming.  It came into use for the odd game of Combat Zone and was also used for a few Scout wargames days.  It's probably been a decade since I used it and I thought I'd be better off finishing it off, using it as a practice project to try and develop my terrain-making skills before selling it off.

One large building was partly inspired by our local architecture here in Norfolk - flint walls with brick corners and detailing.  I've used fieldstone walls with neat block edges.  Needs to be painted with contrasting colours for the blocks and rough stones.

I'll probably keep my statue and plinth, this can be handy as a city centre monument for Epic 40K!

I also had some old cake pillars that were bought from the reduced bin of the local cake craft centre.  I might save these for use in a 15mm ancient and mysterious alien temple.  Shouldn't take long to chop the hex-based ones in half and then base those and the round-based ones and apply a bit of groundwork.

Star Wars Day - May the 4th be with you!

Well, today is Star Wars day, May the 4th*.  As luck would have it, I received a couple of book orders in the post today, the art of The Mandalorian and Rogue One. 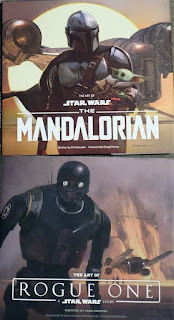 Both are excellent books, packed full of inspiration for the sci-fi wargamer.  The Mandalorian is perhapd a little more useful but both are packed full of stunning artwork.


*Note - this post was written just before midnight on 4th May but for some reason (location of the blogger server?) it says 5th May. Oh well!

As well as the connecting walls mentioned in part 1, I’ve added a couple of extra buildings to my desery town too, one of which will be a central point for a settlement. The basic structure is 5mm foamcore on an MDF base. 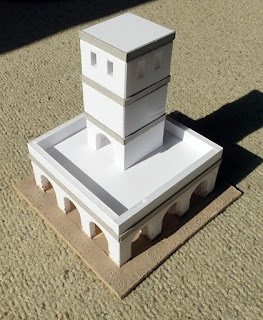 There are arched doorways forming an arcade along two sides, with a smaller inner room.  A three storey tower tops off the building, offset to be central over the small ground floor room.  This provides space for single figures on 2 sides or weapon teams (which I mount on 2p pieces) on the other two. 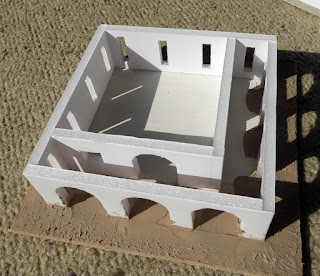 The base has been textured with a coat of brown acrylic caulk which was patted with a sponge. 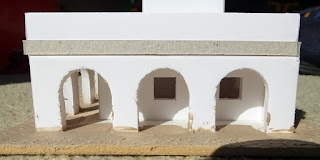 5mm wide strips of cereal packet card have been applied to help hide the joins between the floors. 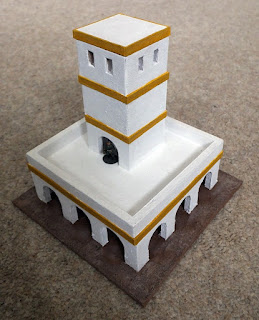 The whole building was textured with filler/PVA mix, stippled on with an old brush.  The cardboard strips were painted yellow to make the buildng a bit more colourful and help it stand out from all the others. 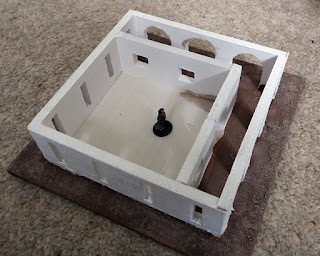 I think I might add a half ping-pong ball to the roof to improve it.  Last photograph above shows a roof I borrowed from another building to show the effect I'm after. 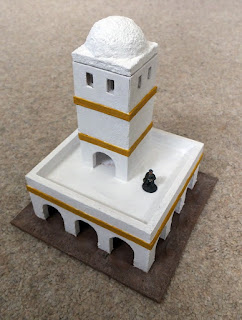 The second building I've added is just a small storage building, nothing more than a bit of extra cover.  Again, foamcore walls, MDF base with brown acrylic caulk texture.  The ladder is made from trimmed down scraps of matchsticks. 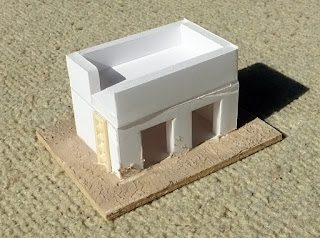 It doesn't actually look much different when painted! 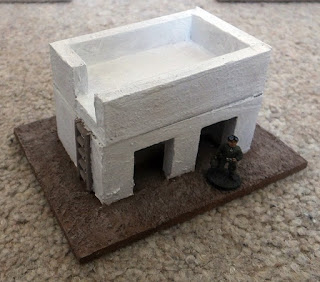