6 fearless adventurers braved the depths of the Catacombs of Chaos, Sir Egbert the barbarian, Falstaff the dwarf, the dark elf, the forest elf, the dwarf miner and the wizard.  At first it appeared a very simple task.  Skeletons and zombies attacked the moment they entered the old ruined hall on the hill but all were easily dispatched.  3 of the adventurers had already bested the Maze of the Minotaur and laughed merrily as they slew the undead with gusto.  Alas!  All too soon their less experienced companions succumbed to their own enthusiasm.  Dashing unthinkingly down a side passage to attack a zombie and skeleton, the dwarf stumbled into a pit trap.  As he lay stunned at the bottom, the zombie lurched into view above and thrust its rusty blade into the dwarf's head!  Being too short to fight back from the bottom of the pit, the dwarf hauled himself out of the opposite side and limped back to his companions.  The wizard was equally unlucky.  Caught up in the excitement, he failed to use his magic, instead flailing ineffectually at the zombie with his dagger.  Needless to say, he came off worst.  Fortunately the dwarf had recovered his wits and was able to help defeat the zombie.  The skeleton attempted to leap the pit trap but failed, dashing itself to fragments at the bottom of the hole.


The remainder of the party ventured along the opposite path, slaying zombies and skeletons left, right and centre and deactivating traps as they went.  As they approached the end of the corridor, the source of the undead was revealed - an evil Necromancer!  Fortunately he proved a particularly inept Necromancer and was easily defeated by the adventurers.

Hurrying back down the corridors, the fleet-footed elf moved into the lead and was first across the bench the group laid over the pit into which the dwarf had previously fallen.  Sadly the Elf paid no more attention to checking for traps than the dwarf, and fell down a second pit on the same stretch of corridor.  Luckily he fared better than the dwarf, managing to smash the ankles of a skeleton before it could impale him upon its scythe.

The last few undead were easily defeated now that their master was lost.  Now that the danger was past, the Elf reconsidered what he had seen down the pit - perhaps some sort of steps, leading downwards.  Lowering a lantern down, the party saw that there were indeed steps - all they had faced so far was but a distraction - this was the entrance into the dungeon proper...

Edging down the crumbling stairs, the adventurers found themselves in a large hall - obviously a goblin barracks judging by the number of them who screamed their anger and ran to attack.  A general melee ensued, several goblins meeting the warriors in hand to hand combat but two hanging back and using their short bows to dangerous effect.  usually easy to defeat, the goblins here proved dangerous foes and several of the party were severely injured by the time the last goblin lay dead in a pool of its own green blood.

A shrine to Nurgle, lord of decay was found just off the goblin barracks and the sorcerer and Chaos champion here almost brought about the downfall of the party.  Teamwork carried the day for our heroes and down a nearby passageway they discovered a fountain of healing which cured all their injuries.  Nearby was a sealed metal door.  No handle or switch was visible and it resisted all attempts to break it down.  A switch must be concealed elsewhere in the dungeon.


Deeper into the dungeon they faced beastmen, Chaos warriors, Chaos thugs.  At the Chaos shrine (the room with the 8-pointed Chaos star on the floor) they found a great mage of Chaos.  Before they could slay him he escaped in a flash of light.  Venturing round an alternative route, the Dark Elf and a Dwarf encountered fearsome beastmen and all too soon the Dark Elf lay slain upon the ground!  The dwarf paused over his companion's unmoving body - was he trying to heal him?  Perhaps saying a quiet prayer for his departed friend?  Nope, he was stripping him of weapons and treasure before trotting off to rejoin the rest of the party!  Meanwhile in the Chaos shrine, the heroes had found a potion of healing.  They glanced down the corridor where the pitiful, crumpled body of the Dark Elf lay.  Then they chuckled and swigged the potion down themselves!

Falstaff the dwarf took the wizard to explore another corridor, entering a small room with stairs leading up to one side.  The stairs took them over a bridge and into an entrance hall, fresh air blowing in from outside.  2 Chaos dwarf sentries lay in wait, armed with crossbows.  The wizard swiftly cast sleep upon one, rendering him harmless.  The other was soon slain by Falstaff.  Having used few spells so far, the wizard decided to use his abilities once more, casting Treasure hoard, allowing him to draw 3 treasure cards instead of the usual one.  Unfortunately the three cards drawn were all wandering monster cards and 3 concealed Chaos Thugs leapt to the attack!  Though eventually defeated, the surprise attack of the Thugs left both heroes injured.

Battling their way down the corridors they finally reached the end chamber (red & yellow decorated squares in the centre of the room) where they finally slew the wizard, though not before he had blocked them with a wall of flame and cast madness upon Sir Egbert, sending him capering insanely back down the corridor and away from the fight.

Stepping over the wizard's corpse, they reached into the hole beneath a Dragon's skull and tripped a switch.  Far away, a metal door could be heard grinding open.

Dashing back through the dungeon, the heroes faced their final challenge, a Cockatrice!  Sadly for the DM, the Cockatrice proved a less than worthy foe and before long the party were wiping the sticky ichor from their blades and dividing up the monster's treasure hoard.  They also relented and gave the Dark Elf a trickle of healing potion.

As DM, the game had a number of highlights - the dwarf falling down the pit trap and the elf falling into another pit down the same corridor... the wizard managing to pick all 3 wandering monster cards from the treasure deck after casting his treasure hoard spell... unusual die-rolling meaning the heroes almost getting wiped out by the feeble goblins right at the start of level 2!
Posted by Paul at 11:18 1 comment:

Gosh - it's been a month since I last managed to post anything!  I've been busy preparing for Scout camps and other events, also beavering away casting, sticking and painting plaster blocks for my Hirst Arts Dungeon so that we can explore level 2 at the Old Buckenham Bone Crushers this Sunday!

I did find a couple of hours to finish off the desert ruins I started back in January.

I found a good packet of Javis scenics "autumn grass" which is just right for parched desert grass. 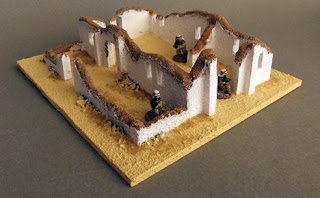 Buildings have been painted with a thick layer of PVA + filler with a top coat of masonry paint to seal it all in.  I've been pleased with how hard-wearing my other buildings using this technique have turned out to be. 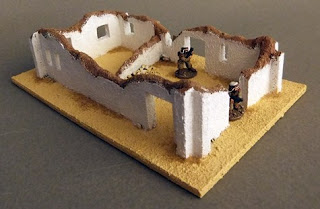 It's also been months since I've managed a game of anything in 15mm so I must try and get one in soon!
Posted by Paul at 11:41 2 comments: