My latest batch are now undercoated.  I've used black this time though I often use grey too - depends what the local pound shop has in stock! 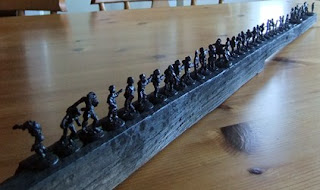 I put a strip of double-sided tape along a scrap of wood and stick all the bases in a line.

This makes it easy to undercoat them all with just a few quick squirts from the spray can and I can hold the wood in the air or at an angle to get into all the nooks and crannies under the chins and arms of the figures.

The next stage with my zombies is to texture the bases.  I paint the bases with thinned down PVA and add a range of different sized bits of grit and sand.

Rather than buying overpriced GW "modelling sand" for £4 or £5 for a 220ml tub, I buy a 25kg bag of sharp sand from HomeBase or Wickes for the same price or less.  Passing it through a couple of sieves and a tea-strainer gives me a range of different sized grits that I save in margarine tubs.  The finest grade is also good for mixing with paint to give a nice textured finish.


Now that the bases are textured, the next stage will be to undercoat them all.  I'll stick them all to a couple of wooden batons using double sided tape so that I can spray them all in one go.

I'm using white undercoat for my 15mm.co.uk automata.  Because my current spray can is black I've just brush painted these ones with Vallejo white primer, then used GW red gore and Vallejo bonewhite with a Vallejo sepia ink wash.


Their colour scheme is based on the Action Force Skeletron.  I thought that it would make a change from the more traditional metal-coloured terminator style appearance.  If you look closely I haven't painted the feet yet - I still need to drybrush the bases but I'm on holiday and don't have all my paints with me!
Posted by Paul at 16:35 4 comments:

Now the first batch are glued to their bases I've added some epoxy putty to fill in the gaps and blend the figure bases into the washers.

The zombie horde is coming along nicely.

Lots more skelebots to come - this will be the first of 7 units.

The last of my SAS troops to add the the 9 I've already finished (as seen in action earlier this month).

Another 13 Earthforce Marines still to finish.  Although they're nice figures, it's a shame that all 5 poses are very similar walking/standing, none actually firing.

I realised that I haven't shown the werewolves yet - also from Rebel Minis.  I've been working on these at the same time.

An extra figure from "The Scene" - a special forces trooper.

Paul's tip for the day - my usual working surface is an A4 cutting board inside a punched pocket.  It provides a shiny surface which cleans very easily - using washers as bases, the epoxy resin often oozes through the hole onto the working surface but it easily peels/pops off once it has set.  The putty also comes off easily as does paint.  When it finally gets too scuffed you can just chuck it away and slip the cutting board into a new one.
Posted by Paul at 21:02 No comments:

Glued to their bases and ready for the next stage...

As those who have viewed my zombie games may have spotted, I haven't actually got very many zombies based and painted yet, hence the need for GZG unarmed civilians to stand in during most games.  14 zombies doesn't really constitute a "horde" I feel (perhaps more of a "hordelet"?), so I thought I'd better get a move on and finish some of my other undead!


I have quite a number of Rebel Minis zombies from their "Modern Zombies 1" and "Modern Zombies 2" sets (which I received as part of the "Better Dead than Zed" starter box).  These are a great mix of modern zombies ranging from office workers to fast food outlet employees to firemen to policemen plus a range of assorted kids and other civilians.  I've also got a box of 15mm.co.uk fantasy zombies who will look fine painted in modern colours.

All the figures get their bases filed down so they're quite thin.  Once that's done the zombies are mounted either individually on washers or in pairs on 1p pieces or trios on 2p pieces.  The multiple groupings will make it easier and faster to move large hordes.  I've got enough extra zombies ready to bring the horde up to 37, with another 20 or so cleaned up and ready to have their bases filed.

I've got a few other figures ready for basing too, 15mm.co.uk skeletal robots and some Rebel Minis Earthforce Marines.  I ran out of my preferred washer type and have only just managed to find another supplier.  I use stainless steel M6 washers which are about the same size as the cast-on GZG bases.  I prefer small bases rather than the larger plastic bases that some people use, but that's just my personal taste.  It does mean that there isn't as much space for details like grassy tufts but it does mean that walkways and bridges etc. can be a more realistic width but still provide enough space for figures to stand.  I can store them more easily too!  I might get around to fitting some boxes with magnetic sheeting too, in which case I can transport them more easily.
Posted by Paul at 00:48 2 comments:

My 15mm armies will soon have some much-needed air support courtesy of Matchbox Skybusters.  First up we have a flight of 3 "Stealth Launch" fighters.  These will provide ideal fast air support and will also be able to guard against enemy aircraft.  I'd see them as air superiority fighters with a limited ground attack capability depending upon ordnance loading.  They seem to be a cross between a Grumman X-29 and the F-302 from Stargate.  A very nice sci-fi fighter, perhaps slightly small for 15mm scale but I'm very happy with them.  I've noticed them cropping up in a few other 15mm blogs too, so others obviously agree.

I also have some lower tech prop planes.  These remind me of the Skyhawks from the Amtrak Wars books by Patrick Tilley, also the Boomerang spotter 'pane from BattleTech.  These will become spotter aircraft, slow flying but highly manoeuverable.  I'd envisage these being cheap and easy to maintain, the low technology base enabling them to keep running when the grid is being jammed.  They'd also be ideal for third world countries to add a couple of hard points enabling them to carry a pair of light machine guns or a couple of small bombs.  The pusher-propellor and twin-boom tail mean that even though it is low-tech, it still looks suitably futuristic.
At the time of writing, painting is already underway.  I feel an airfield attack coming, perhaps something along the lines of the Pebble Island raid...
Posted by Paul at 21:22 2 comments:

The Guavan Defence Force has been developing its own armoured fighting suit technology by retro-engineering some of the wreckage from their earlier battle with Neo Colonial Commonwealth forces on Libellula.  The work is taking place in a isolated research facility...

The teams move in from the East, filtering through the woods and carefully avoiding the GDF wheeled gun drones that are on a perimeter patrol circuit.

Once in position, Team 2 pass their morale test and sprint down the hill towards the GDF fireteam on guard, engaging them in close combat.

Unable to return fire because of the surprise generated by the sneak suits and completely outmatched, the guards are quickly overcome.

Team 2 move swiftly round the side of the building and attempt to open the hatch.

Passing their TQ test they get the hatch open and move inside.

Team 1 move up and as Team 2 crack the second hatch, they dash inside to attack the GDF techs.

The GDF techs decide that their reaction to this charge will be to run for it - they're not paid to take on special forces!  The sprint as fast as their little legs will carry them, out of the building and down the track.  Seeing the commotion, the GDF infantry fighting vehicles start to move towards the building.  Squads of troops follow suit.

Alone in the workshop, Team 1 set charges on the crate of components, the captures fighting suit and the handily parked GDF scout car.

Team 2 provide covering fire to keep the escape route clear.  They take down one of the GDF troopers whilst avoiding taking any casualties themselves.  The GDF squad miss the next turn while they administer first aid to their severely wounded comrade.

The GDF wheeled drones cease their patrolling and move towards the disturbance.  Having evaded detection thanks to its stealth equipment and adaptive camouflage, the Cyclops catches a drone by surprise.

It successfully destroys the drone, but an IFV and a squad of troops round the corner of the building.  The Cyclops succumbs to a lucky shot from the IFV's light autocannon, the shells finding a weak spot in the armour and rupturing the fuel cells.  The pilot is killed instantly as the Cyclops erupts in flames.

Team 1 emerge from the building and leap straight into combat with a squad of GDF troops.

They wipe out the opposition and Team 2 do likewise with a second GDF gun drone.  There is nothing they can do for the Cyclops pilot but he has covered their escape.

Having dispatched the nearest opposition, both assault teams make a rapid getaway over the hill and into the woods there their sneak suits will hide them from pursuit.  Behind them the charges detonate, destroying the captured Cyclops and crate of recovered technology.  Despite the loss of another Cyclops (too badly damaged for the GDF to recover anything this time), the mission is a success for the Commonwealth!  The GDF meanwhile have 4 dead, 4 seriously wounded and a few other light injuries.

A quick, fun game to play, a chance to try out some special forces with a range of different weapons in Tomorrow's War.