A couple of recent conversions... 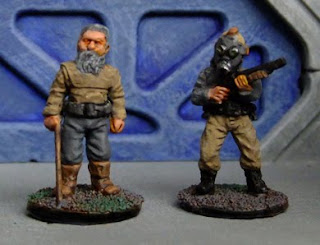 The elderly gentleman on the left started off as a GZG civilan/colonist, the one on the right is a GZG armed civilian/colonist with a ZG gasmask conversion head. 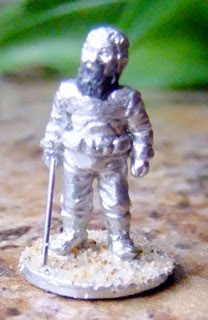 I decided that the population of my colony are in need of a patriarch of some sort. I started with a GZG colonist, added a beard sculpted from epoxy plumber's putty and a walking stick from a guitar string.

I also wanted to use some more of the GZG conversion heads which I've had for a while. A couple of my armed colonists have lost their heads and received replacements. The middle figure's head was carefully sliced off (may re-use it elsewhere), the figure on the right had his head removed with a pair of cutters as it was too difficult to do with a knife. Both had holes drilled with a pin-vice, and the heads (with about 4mm of stalk still attached) araldited into place. 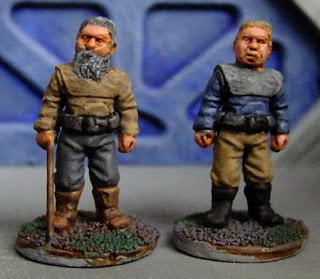 The elderly gent out for a stroll with a fellow colonist - possibly a son judging by the familial resemblance! 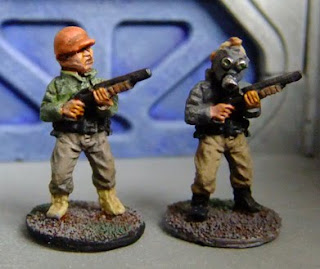 Before & after - an armed colonist and his rather sinister gas mask wearing friend. 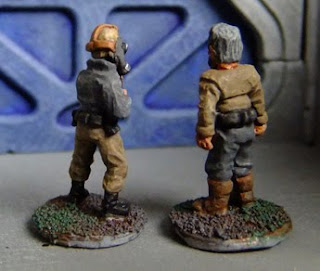 A rear view of the elderly gent and the masked gunman.
Posted by Paul at 17:04 2 comments:

I've had some Rebel Minis zombies for ages, and at last I have the first batch cleaned up, undercoated and based. 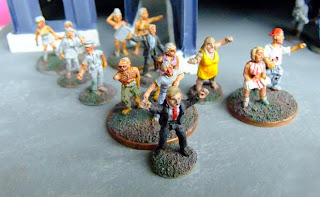 So far they've all had their flesh done, though I shall be drybrushing with greyish skin tones on some of the more aged and damaged zombies.

My favourite so far is the smart corporate zombie... 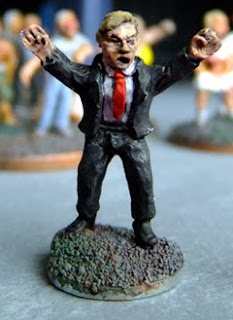 A photograph of the fuel dump part way through painting. I'll take a few more detailed photographs once it's completed. 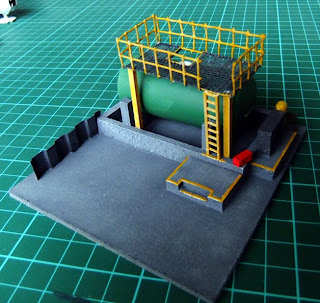 I've been building this workshop over the last few days. The basic structure is made from corrugated plastic cut from mushroom punnets. The roof is corrugated craft card. The 5mm high foundation wall is thin cork floor tile. There are holes all around the edge of the base, these will have cocktail sticks glued in as fence-posts once I've finished working on the buildings. 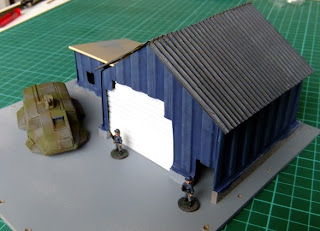 The workshop's roller-shutter door comes from a Miele vacuum cleaner bag. My wife had emptied the bag into the compost bin before I cut this piece off, so luckily there was no danger of my spilling dust all over the kitchen floor! 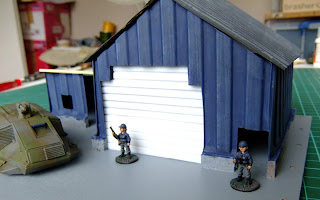 The roof is removable, as is the door. 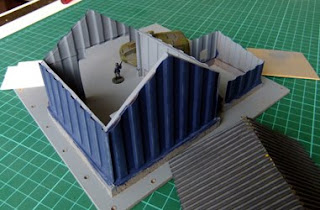 You can see how the walls were reinforced with L-section offcuts from the edges of the mushroom punnet. Although the plastic is pretty thin & flimsy, it forms a surprisingly rigid box when it's all glued together. I used cyanoacrylate superglue to stick all the bits together, and then sprayed the whole thing with £1 shop grey car primer. 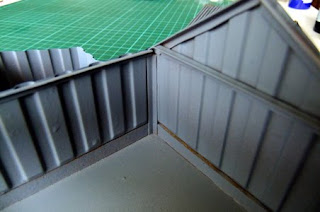 Work continues on my Dinky Eagle re-paint. The basic grey has been well drybrushed with white to bring out the detail. I've started adding some of the markings now, such as the black anti-glare panels on the command module beak. 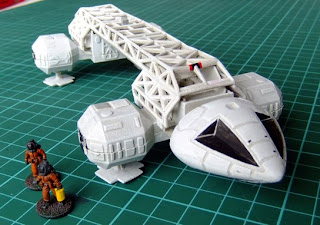 I still need to paint the RCS nozzles and re-attach them.