The Battle for Tufar Bridge

Thursday saw a major battle in the ongoing campaign on Charity.  Tufar is the location of a harvest export facility, still in government control.  All routes into the facility are under government control but the most lightly defended is the little-used bridge over the river.  AFCFA have chosen to make their attack here.  Although the lightweight, single-lane bridge will limit access to the facility, the might defences should make it an easier target...

Victory points awarded as follows: 3 points per vehicle or turret emplacement destroyed, 1 point per fire team.  10 points for whichever side had control of the facility side of the bridge at game end (ie. no enemy troops within 12" of it).


The river is wide, and restricted to wheeled transport, AFCFA will have to attack across the bridge.


Commonwealth defences include 4 turret emplacements, 3 with twin rotary cannon, one with an anti-tank turret.


A 2 storey toll office overlooking the bridge provides the main Commonwealth observation post (OP).  The defenders have a fire team on each floor, with a LAW on the top and GPMG on the ground.  2 M-ATVs are parked to the rear.


2 Gladius tanks and a pair of Glaive APCs are in the nearby vehicle park, along with a Claymore heavy APC containing 2 teams of Combat Cyborgs.


AFCFA launch their attack.   The Pangolin support vehicle rolls to the riverbank and opens fire on the defence turrets.  The first one goes up in smoke, one crewman is OK but his companion is killed outright in the explosion.


A Commonwealth fire team atop a nearby residential block return fire with their LAW.  Success!  The Pangolin FSV is also a burning wreck.


Stoat scout cars lead the way across the bridge with APCs moving up behind.

The Commonwealth team in the residential block take casualties as fire comes in.


The 2 AFCFA HAMR teams prepare to fire on the turrets opposite them but the Commonwealth crews are on the ball.  Gunfire tears up the to of the hill, and all 4 members of the HAMR teams are down.


A reserve Commonwealth fire team dashes across the street to the rear of the residential block, ready to reinforce the injured team on the upper floor.


The AFCFA ATGM teams have found a suitable firing position and their first shot takes out the remaining turret on that side of the bridge.  The other team fire their missile into the residential block behind, collapsing the structure into rubble and injuring another member of the Commonwealth team inside.


The first of the Commonwealth reinforcements arrives early - a Sabre main battle tank has pressed on ahead of the main force and will prove a welcome addition to the bridge defences!  The 2 Gladius tanks swing out from the vehicle park ready to engage enemy vehicles.


The Stoat scout cars lead the AFCFA charge but prove no match for the Gladius main guns.  A following APC barges aside the burning wreckage at the end of the bridge, narrowly missing the 2 crew members..


The other Stoat has only one surviving crewman, he exchanges fire with a Commonwealth fire team and takes one of them down.  Another trips in the rubble and injures himself!


An AFCFA fire team discover that a flimsy junk provides no cover from incoming bullets.


The two remaining turrets attract more fire.  The anti-personnel turret is jammed facing across the river, the anti-tank turret has the main gun disabled.


The first APC across the bridge meets a Gladius main gun with unfortunate results.  One fire team makes it out OK, the other has one dead, one wounded.


AFCFA make use of their "golden BB" (fog of war card), their anti-tank missile demolishing a Gladius tank.


Sensing impending defeat, the Commonwealth commander orders the Combat Cyborgs into action.  Can they save the day or is it too late?


A second APC makes it over the bridge but 2 hits from tank guns shred the wheels and drive train, leaving it completely immobilised.


Survivors from the first APC are fired upon by the Commonwealth fire team on the ground floor of the OP.  Luck is with AFCFA, they take no casualties but kill one marine and injure another in return.  They move forward and prepare to follow-up their success.


AFCFA troops from the Pangolins fan out around the OP building.  The fire team on the top floor is in bad shape, 1 dead, 2 seriously wounded, 1 lightly wounded.  They are considered combat ineffective.  On the ground floor, things aren't looking good, the team had casualties and are almost surrounded.


More shooting takes down the injured marine on the ground floor and one of his comrades.  The survivor sees another team preparing to fire on them so grabs his buddies and hauls them out of the building.  Despite his heroic efforts, another AFCFA team has crept around the side of the building and gun him down.


A fire team from the disabled Pangolin dashes across the road to the cover of the local public conveniences.


The Combat Cyborgs reach the OP building.  AFCFA launch 2 attacks against them but both are bloodily repulsed.


AFFCA medics have tended to the HAMR teams.  Although 2 were dead, the survivors have combined to form a single team and successfully eliminate one of the surviving turrets.  The other falls to an ATGM from the other AFCFA weapon teams.


AFCFA gain a reinforcement in the form of a Weasel light armoured car.  It speeds over the bridge but tank fire damages it.


Moments later another tank shell streaks in and the Weasel's charge is over almost as soon as it began.


The remaining Gladius is damaged, the main gun out of action.   The Sabre is still untouched, as is the Claymore.  They fire into the immobilised Pangolin, destroying it outright.  The other team of Combat Cyborgs moves up and eliminates the AFCFA fire team outside the toilet block.


The Combat Cyborgs press forward with their counter attack,  finishing off one fire team and moving towards the next...

An AFCFA anti-tank missile streaks over their heads, destroying the OP building and eliminating the injured marines on the upper floor.


At this point, Commonwealth vehicles make use of their grav propulsion, the Sabre gliding over the river, a Glaive moving right across to the burning wreckage of the AFCFA Pangolin FSV.  The Claymore moves forward to cover the bridge.


Game over.  All AFCFA troops on the facility side of the river have been eliminated.


The bridge is blocked by burning wreckage.  The Commonwealth relief column is arriving at any moment.


An exciting game - AFCFA had the upper hand for much of the time but the Cyborgs proved the saving of the Commonwealth defences.  Final victory points were Neo-Colonial Commonwealth: 20, AFCFA: 18.  Neither side had total control of the bridgehead so no-one got the extra 10 points.
Posted by Paul at 11:22 6 comments:

Last weekend I finally got around to making some more dice.  Here's how I did it...

Materials:
Polaroid inkjet photo-paper from Poundland
Blank dice from Witzigs shop on Amazon (99p for 10)
A laser printer (I used a friend's)
Scissors
Iron*
Ironing board or other heat-resistant surface
Pan scourer

*Note: The iron will be HOT! Exercise caution and don't put it face-down somewhere and get distracted by your dice!  The dice cool fairly quickly, I was able to handle them with bare fingers the whole time but if you aren't sure, use gloves or other protection.

1) Work out your designs.  Text needs to be reversed - you can type it into a text box in word, then reverse the image.  That way, once you're ironed it on, the text will be the right way round!

2) Print out designs on inkjet photo paper.  Laser photo paper won't work!  You need the glossy inkjet surface.  Print out a test page first with a pencil mark in the top left corner so that you know which way up you need to insert the paper and can check the size of symbols against your die.  Don't print too many sheets at once, I have heard that if the printer gets too hot, the coating of the paper can come off inside and gum things up.


2) Cut the symbols into sets of 6. I didn't cut them all out in one go - less chance of accidentally putting the wrong mix of symbols on!


3) Carefully position the symbol on the face of your die (ink side down) and iron with gentle pressure for 10-15 seconds.  I use medium heat. Try and place the iron directly onto the die and keep it very still so you don't smear the image.


4) Reposition the die and continue ironing on the bits of paper until you've done all 6 sides.


5) Allow the dice to cool for a couple of minutes so the ink sets in completely.  If you're doing several, the first ones should be cool by the time you've done the last one.

6) Carefully peel off the paper.  Your image should be visible on the die.

There will still be a layer of film from the paper over the images on your die, so they will look very pale.

7) Wet your dice and give a gentle rub with the pan scourer to remove the last traces of paper film. 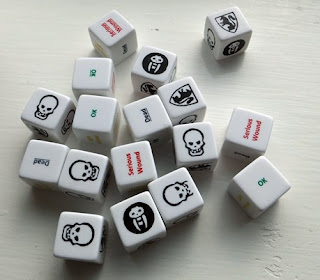 I've been making dice for 2 games here.  Heroquest (resized to 90% original size so they fit better than the trial die that I made in April) and Tomorrow's War / Force on Force casualty dice (the underscored ones are for trained medical aid which result in a better recovery rate).  A few came out slightly wonky or off-centre but at about 11p each I can afford to make lots of spares anyway.
Posted by Paul at 06:06 7 comments: