I've been meaning to build some sort of supply depot for a while.  It can act as an objective for a small game, or just as part of the general scenery during a bigger engagement.

I have a huge supply of 1cm square pieces of 5mm foamcore which are the cut-outs from the windows of my desert village and other projects.  I've used some of these to form the stacks of crates.

The tarpaulins are PVA-soaked kitchen roll draped over the foamcore stacks.  The depot staff have used large wooden poles to weigh down the edges of the tarpaulins, these were made from bits of barbecue skewers.  Everything has been painted using Inscribe acrylics.

I've tried to make sure that the steps in the crate stacks are large enough for my figure bases to stand on (eg. GZG armed colonist and Rebel Minis contractor and gang member).

The little hut is a model railway building.  Being designed for HO/OO scale it's a bit large when compared to an average height 15mm figure (a GZG colonist in this case). 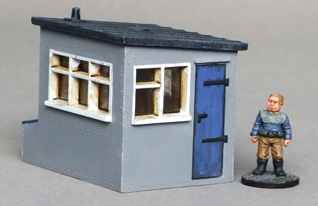 I solved the problem by creating a raised concrete step in which the hut sits.  It's just more foamcore scraps, I also shaved off the original lower door hineg and made a new one out of paper (it even has blobbed-on PVA screw-heads, though they're hard to see in this photograph!). 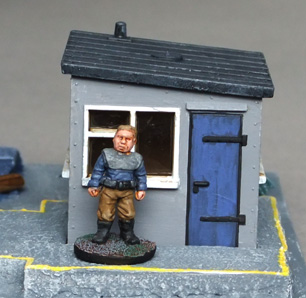 My latest conversion is this armoured personnel carrier, more cheap but useful goodness from Poundland.  There's another recent article about it on the Glue in The Carpet blog which I'm sure many of you will have seen, GJD is obviously much quicker at turning around his buys as I've had mine for several weeks and have only just got around to finishing it! 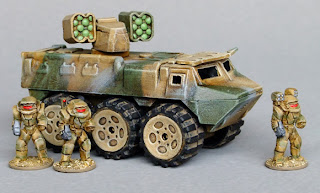 As has been mentioned on other blogs, this is a French VAB personnel carrier which comes in 2 flavours, 4-wheel and 6-wheel, the latter being primarily an export model.  I've already got a 4-wheeled version which featured on my blog in March last year, I've decided to go for a different colour scheme with this one. 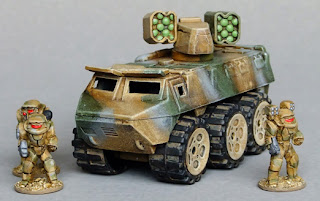 The first thing to change was the weedy missile launcher turret which had a strangely positioned pair of skinny little tubes on each side.  After removing the screws to take the whole thing apart, I disassembled the turret and got rid of the missile tubes.  The replacement pods come from a Mechwarrior clicky figure (might have been a Jes II missile carrier or something like that - an excellent source of satisfyingly chunky missile pods!).  They were drilled & mounted on a cocktail stick that fitted snugly in the pivot-point of the turret.  Why use a cocktail stick instead of a bit of brass rod?  Because I can't find where I've put my pack of incredibly useful bits such as rod, wire, plastic girders etc, that's why!! 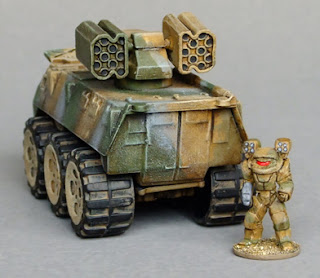 With it's huge wheels, I thought that this would be a suitable vehicle for desert operations on sandy terrain.  Colour scheme matches my recently painted NSL Power Armour, in fact I thought of it for the APC first but took so long to complete it that I felt compelled to try the scheme on the infantry while I was waiting.  Base colour is Humbrol 93 desert sand, Vallejo reflective green mixed 50/50 with the sand colour for the main camo stripes, plus Vallejo cold grey patches here and there.  The whole thing received a wash of Vallejo sepia ink with base colours drybrushed on top, followed by an all-over drybrush of Vallejo bonewhite to give a dusty finish.  Wheels have been left the basic sand colour rather than trying to tie in the camo - if you have stripes across a wheel it tends to engender a stroboscopic effect as it rotates, drawing the eye towards it rather than helping it blend in.  I know that out little model vehicles don't actually drive around and get shot at, but I still try to follow the principle if I can. 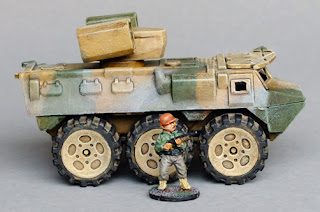 The last photograph shows a GZG armed colonist to give an idea of scale.  I only got one of these APCs at the time because I wasn't sure how it would look with the huge wheels.  I think it probably works OK (though I wouldn't like to try and squeeze out of those driver's compartment doors in an emergency), but as Pounland didn't have any left when I last visited, looks like this one is destined to be lonely!
Posted by Paul at 17:33 6 comments:

The Interstellar Mining and Extraction Consortium have two more vehicles to add to their inventory...

These large dump trucks came from the local Poundland, painted in a hideous orange colour that was sprayed on so thickly that most of the detail was completely obscured - but I could see their potential!  After disassembly and 2 lots of paint stripping on the metal parts, the cabs received a grey spray undercoat while the trailer received white. 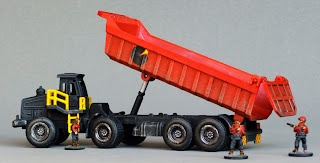 The body of the vehicle is Vallejo matt black with a Humbrol 32 dark grey drybrush.  The hopper is GW red gore with a Vallejo sepia wash.  The whole thing has been drybrushed with Humbrol 29 dark earth and GW chainmail to give it a suitably worn appearance.  I made a stencil for the IMEC logo and stippled through it with Vallejo black, then hand-painted the yellow slice afterwards. 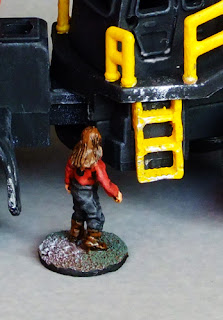 IMEC would have liked to continue their red/black liveried theme throughout the vehicle, but health and safety law decrees that they must have the guard rails and steps in a bright, contrasting colour.  You can see the wear on the treads and by the door where the driver has been climbing in and out.

Hazard stripes were added to the rear mudguards.  Headlights and reversing lights are GW mithril silver, indicators Vallejo fire orange and GW red gore for the brake lights.  At some point I'll line the hoppers with clingfilm and pour in some plaster & sand to create removable loads for them.

A group shot of the IMEC gang.  They'll make good scenery for a mining colony and I already have a couple of scenario ideas in mind.  I think I need a few more crew though, plus more excavators.  That Mining Droid will have to work hard all on its own!  I'm thinking a 1/43 scale tracked digger should look huge and imposing if I convert it for a 15mm crew.
Posted by Paul at 12:53 5 comments: