A few days ago, I decided to have a bit of a sort out. My paintbrushes were scattered between at least 5 different boxes, so I thought that I should try and rationalise them. I came up with these candidates for disposal...

I haven't a clue what happened to the bristly end of the middle brush! Why on earth did I even keep this bit? The ferrule on the bottom one snapped during cleaning, so it ended up being used to stir paint. The second from bottom has no bristles left -again, why did I keep it? 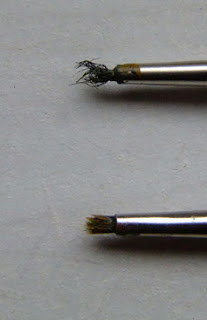 The top couple of brushes (Humbrol Senator) aren't really any use now. I'm not sure what happened to the top one, and the bottom one has been drybrushed into oblivion.

At the opposite end of the scale is this lovely little brush, an Inscribe Series 2000 size 00. This has been my primary figure-painting brush for well over 10 years, originally dealing with 40K Space Marines and Imperial Guards and Epic scale armoured vehicles and infantry. More recently it has been responsible for the majority of my 15mm figures. I've always found Inscribe brushes to be fantastic, easily the best of all the different types that I have tried over the years. This particular brush is only used for acrylics, which is probably why it has survived so long. The other brushes have been used for Humbrol enamels, and cleaning them in white spirit or turps really shortens their lifespan.

My latest find is cheap artists brushes from the local £1 shop. They come in a pack of 12; 4 decent quality gold taklon suitable for figures/vehicles, 4 coarse bristle suitable for large-scale scruffy scenery painting and 4 soft brushes (maybe squirrel or something?) which are ideal for undercoating or drybrushing when the bristles are cut to half length. Each type generally includes a couple of wide, flat brushes for covering large areas, plus a pair of smaller round brushes for detail.

Now all I have to do is get a move on and finish some of the many projects I have on the go - moon buggy, Eagle, dropship, armoured vehicles, SWAT team... 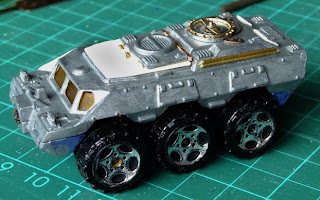 This started off as a Matchbox "Battering Ram" Police vehicle. It is supposedly 1:86 scale, but parts of it seem more like 1:200 judging by the size of hatches and windows! I could see that with a little modification to re-scale it to closer to 15mm, it would make a great exploration vehicle for travelling through moonscapes. 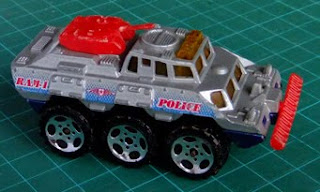 After drilling out the rivets and disassembling the parts, I discarded the battering ram into my bits box, along with the turret (not right for this, but could come in useful on another project if I replace the gun barrel...) Next, I attacked the out-of-scale upper cabin section with a pair of side cutters, removing all the window frames. A hacksaw was needed to cut through the solid rear section, and a large file smoothed all the cut areas flat. A new plasticard roof covered up this gaping hole, superglued in place. The cut-off top of the cabin featured a nice vent, so rather than throwing it away, I filed the underside flat and superglued it to the new plasticard roof. The remaining flat areas of plasticard were dressed with a plasticard hatch, vent and a couple of bits of guitar string to represent hinges and help hide joints. 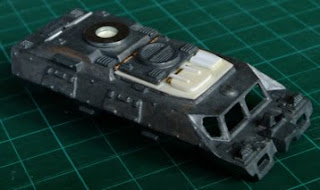 A washer helped cover the hole where the turret used to fit, and a plasticard scrap glued underneath it blocked off the hole in the middle. Into this I added a couple of tiny watch parts, with a few more arranged around the turret mount to fill up some of the empty space. A couple of extra plasticard rectangles were added to the rear of the superstructure, one of which had a small piece of mesh glued on to make it look a little more interesting. 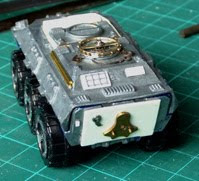 Although the rear of the vehicle featured a couple of small hatches, I decided that something larger was needed - after all, the occupants could be entering the vehicle wearing bulky EVA suits which certainly wouldn't squeeze through! I filed away the existing hatches and replaced them with a large plasticard hatch, suitably embellished with some old watch parts, guitar string hinges etc.
There was a large hole in the front of the vehicle which had housed the battering ram shaft. This was filled with epoxy putty and filed smooth when set. A small watch cog finished it nicely, perhaps some sort of equipment attachment point or power connection?
As it's supposed to be surveying airless worlds, I decided that jerrycans, wooden crates, bedding rolls and other stowage probably weren't appropriate on this occasion! The one thing I did add was a pair of ranging rods made from brass rod, the end of one being filed into a point.