As a rules system, I like this book. I've heard people sing its praises for some time, and I can see why. I would have given it 5 stars, but there are problems with this edition. Despite this, I think it will probably become the main system I'll be using for a good few years to come. I've already tried a couple of games, and by the second game it was already running more smoothly, with less checking of the rulebook required. The only thing is, I'm not sure if I'm playing it correctly, as I'll explain below...

Although the book is very well produced, with good quality paper and excellent production values, it has been poorly proof-read. Several typos leap out at you - the campaign section at the rear of the book is headed "CAMPAGIN SECTION" throughout, mechanised combat appears as "MECHANISED COMBA" on the contents page and so on. In this day and age, with a spell-checker being included in virtually every word processor, there's no excuse for such glaring spelling mistakes. Other parts of the rules are unclear and could do with more examples, for instance the "round of fire" concept and the section on multiple non-initiative units reacting to an initiative unit are slightly fragmented and need more explanation. Thia may be partly because of the way that the rules have been put together. Reading the Ambush Alley free "play before you buy" download, I can see whole paragraphs which have been re-used. This makes sense - after all, why re-write an explanation that already tells you what you need to know - but it hasn't always been fitted smoothly into the new sections. In other cases, sentences refer to things that do not appear in the book, for instance a unit clearing a building must roll its dice to enter the building and check the result against a table - but the table seems to have been missed out of the book! The same goes for a reinforcement table for the Vietnam War scenario. Both have now appeared on the Ambush Alley Games forum (within a few days of publication), but really they shouldn't have been missed out in the first place. The forum also has lots of rules clarifications, and most queries seem to be answered within hours, but not everyone has easy access to the internet, and surely the idea of publishing a big, glossy book is that you shouldn't need to constantly check things online.

Other parts obviously come from earlier versions of the game and use terminology which has been replaced; the "cautious movement" referred to at one point is now referred to as "tactical movement". The general order in which the rules are presented seems strange in places, but given the way that the system works, this is perhaps unavoidable. An example would be the action/reaction section; though this is one of the core concept of the game, it doesn't appear until some way through the core rules, but I can see that a thorough understanding of the fire and movement rules would be required first, otherwise it wouldn't make sense! As a result of this, my first few games have involved a large amount of flicking back and forth through the rule book to find the correct pages, but the excellent contents page and index do mean that you instantly know which page it is that you're looking for.

The quick reference sheet could do with a little fleshing out; the morale table details the results of morale checks, but doesn't explain the game effects, so you still have to refer to the main rulebook to find out what being "pinned" actually means. In contrast, the medical treatment table details the results of first aid checks on injured figures, and explains the game effects of their injuries without the need to refer to the main rules. Perhaps this is something that Ambush Alley Games can rectify by issuing an expanded version on their excellent web site - they've already promised that one will be available very soon.

As a game system, although it has taken several re-readings to understand some of the core concepts, I'm sure that after another couple of games I won't need to refer to the book much at all. The large number of worked examples help illustrate the game concepts and make it much easier to understand. The (nearly) universal mechanic means that things flow quickly and easily, and the avoidance of endless sheets of weapon stats that differ for every army means that the amount of table-checking is very much less than for most games. The reliance on quality of troops rather than specific weapon stats also means that it is very flexible - the example scenarios included range from the Arab-Israeli conflict to Vietnam to the Falklands to recent combat in Iraq, all playable without any additional rules.

Overall, though not without its flaws, it's excellent value for money - and a huge breath of fresh air compared to many of the longer-established gaming systems on the market. If a second edition comes out with better proof-reading, I'd give it the full 5 stars. Given the amount of feedback on the AAG forum and the promises of an errata sheet soon to come, there's no reason (other than financial!) why a second edition shouldn't appear with all these bugs fixed. The speedy reply to questions on the AAG forum is a bonus, but only if you have readily available internet access.
Posted by Paul at 18:59 3 comments:

A few works in progress...

A few works in progress... 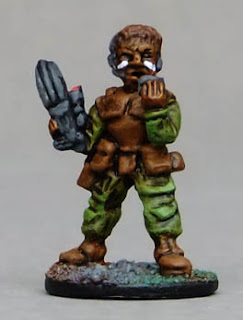 OUDF native Australian trooper. He's either talking into a communicator, eating a biscuit, or checking his face-paint in a make-up compact. 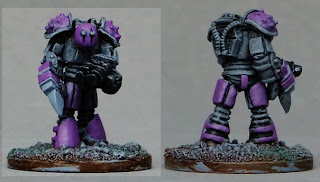 Kaamados Dominion Agaamid. Does the purple and grey colour scheme really work? Laura my wife quite likes it!
Posted by Paul at 10:36 4 comments: