One of my objective markers was going to be a statue.  I ordered a couple of eM4's "Tinpot Dictator" figures a few years ago with the thought that they'd make ideal statues, so this was my chance to actually use one.

I wanted a weathered bronze effect and there are plenty of companies wanting you to buy their special technical paints for a verdigris effect, but it's pretty easy to do with just normal acrylics.  After a spray of Wilko matt grey undercoat, I dug out some old craft paints: leaf green; forest green; Humbrol antique bronze. 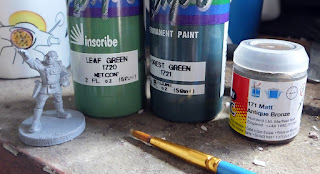 I put a blob of each green on the bottom of an old yoghurt pot as a pallette. 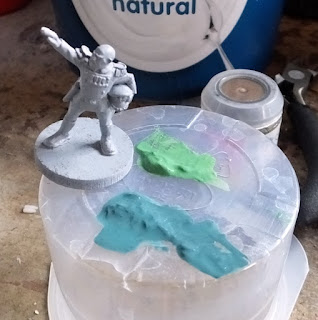 This effect needs a sort of reverse highlighting.  The lightest green is applied first, making sure to get a good coat into every nook and cranny. 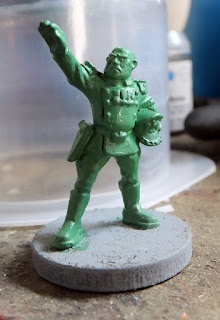 I mixed up a mid-shade between the light and dark greens and drybrushed this heavily over the model. 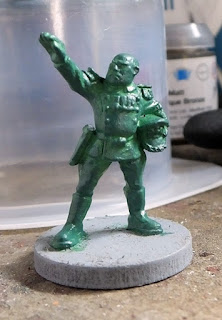 I followed with another heavy drybrush of the pure dark green. On reflection, I probably didn't need the mid-shade of green but it only took a couple of minutes to do, and I already had the paint squeezed out ready anyway. 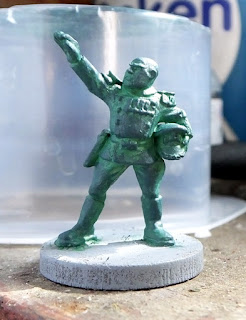 This Mark Copplestone-scuplted model does not have excessive amounts of detail like many more modern figures, but has a great pose and nice folds in the clothing that take the drybrushing really well. 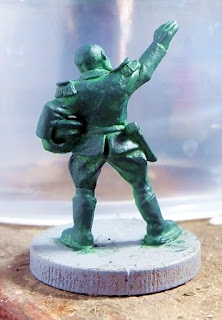 With the verdigris layers complete, it was on to the metallic top layer, my elderly pot of Humbrol antique bronze.  This meeded a good stir but I eventually got it into a usable state.  It's pretty good for a 20+ year old paint! 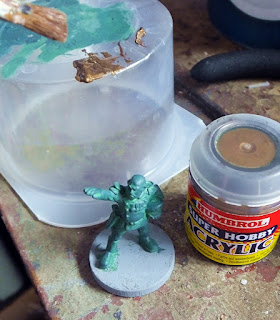 The bronze metallic was drybrushed across the whole figure, not too heavily because I wanted plenty of the green layers showing though. 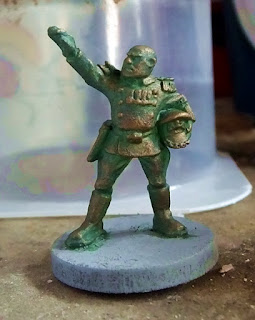 It was a hot, sunny day and the paints dried quickly, so the whole figure only took about 10 minutes to paint from base green to finished metallic. 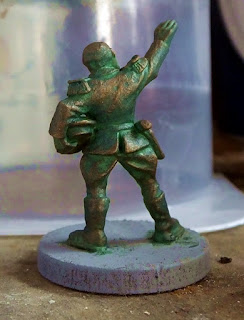 So there we have it, cheap and quick way to paint weathered bronze statues.  This is one which has been polished my the dictator's minions fairly frequently (note the lack of bird poo on the head, shoulers and upstretched arm), so the verdigris is restricted to the more protected areas.

If you wanted one that's been less well cared for, you would drybrush the bronze under the legs, underneat the arm etc.  The exposed upper surface would be almost entirely the lighter green, perhaps with an even lighter drybrush on the uppermost points.  There would also be darker streaking down the face, front of the chest etc where the water runoff has marked the surface.  Just do an image search on "verdigris statues" or "antique bronze statues" and you'll find loads of great examples.

Next time I'll take a look at the ornamental garden and brick plinth tohat make up the setting for my statue.