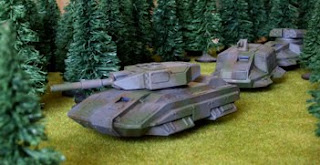 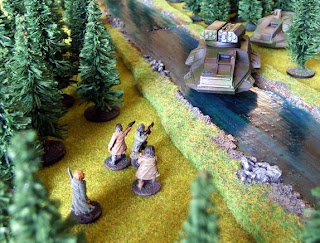 Local forces are often severely restricted in their movements by terrain features which a grav tank can simply glide over. 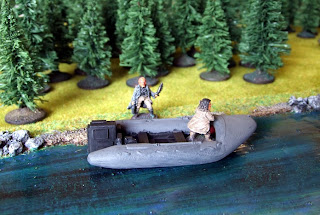 I was interested to hear about the success of the first 43 days of the Kepler space observatory - in less than 2 months it studied over 150,000 stars and it looks like over 700 could have planets orbiting them, including many solid planets which could potentially support life.

Some of the stars appear to have 2 or more planets, which could increase the chances of life evolving elsewhere. Smaller solid planets in a star system with a large gas giant like Jupiter are a likely place. The gas giant can help "hoover up" asteroids and smaller planetoids, reducing the number of meteorites impacting on the solid planets and increasing the chances of survival for anything which does evolve.

The star Gliese 581 in the constellation of Libra appears to have 4 planets, one of which (Gliese 581e) is only around twice the mass of Earth.

The closest planet so far discovered is Epsilon Eridani b, only 10.5 light years away.

Science Fiction is becoming science fact all the time...
Posted by Paul at 18:53 No comments:

The "Z-Wagon" ready for action!

Grumpy's survivalist "Z-wagon" caravan is ready to take on the zombie hordes! 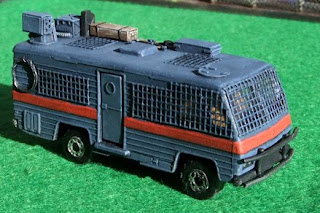 It took a while to decide on a colour scheme, and after a quick play on photoshop, my wife Laura had to be called in to provide her opinion. Here's what we thought... 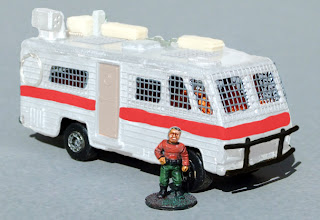 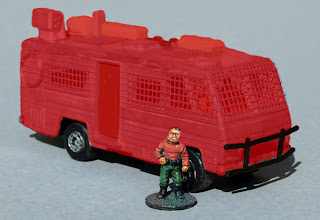 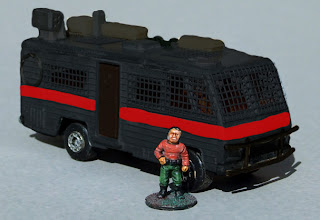 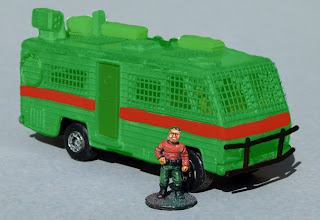 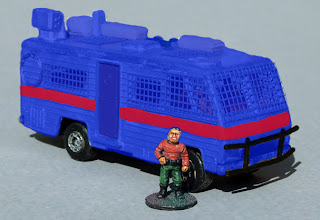 Here are some more pictures of the finished article. Black undercoat was followed by Humbrol acrylic matt 104 oxford blue, highlighted using successively lighter layers of an oxford blue + white mixture. I was thinking of adding some rust patches, but I rather like this as it is. It looks weathered, but well maintained, which is the effect that I was after. 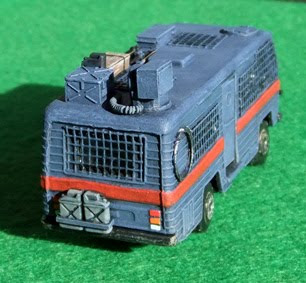 The red stripe was added using humbrol matt 60 scarlett (why does humbrol scarlet have the extra "t" at the end?) with a dash of matt 33 black added to make it slightly darker. A lighter stripe of pure matt 60 scarlett was added to highlight the top of the stripe and the the edges. The petrol cans are matt 32 dark grey with matt 64 light grey highlights, and the same goes for the coiled cable from the missile launcher. Lights were painted in citadel colour acrylics - skull white base, followed by red gore and red gore/sunburst yellow mix as appropriate. 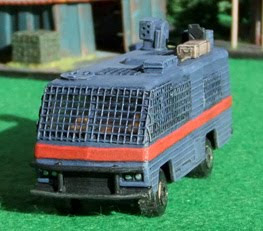 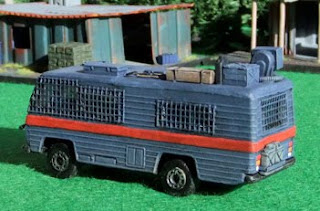 The wooden crate is humbrol matt 29 dark earth, with a drop of matt 33 black added for the shading and some skull white added for the highlights. 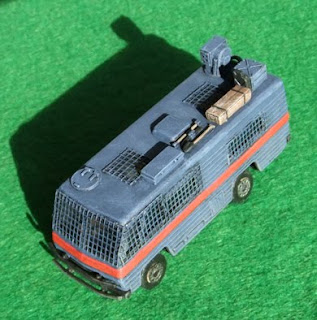 Wooden parts of the tools are painted using the same colour mix as the crate, and the pick-axe and shovel heads have been left matt black for now.

Here are Grumpy and friends preparing to repel the zombie horde - click on the image for a larger view.
(GW fantasy zombies used for a forced perspective photograph - that will have to do until I get by Rebel Minis zombie hordes assembled and painted!)
Posted by Paul at 10:38 2 comments: 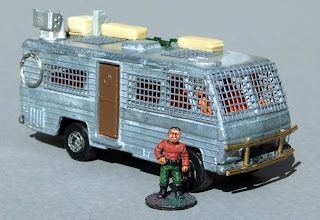 This is what it has taken to get to this stage... 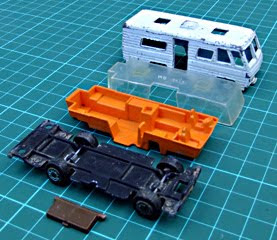 First, the rivets were drilled out and the vehicle was disassembled. I'm afraid that the interior probably won't survive the refurbishment in its original 1960s orange! 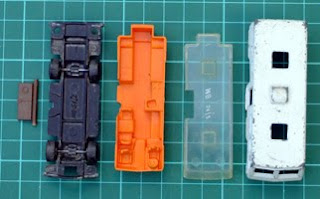 Although it's difficult to see here, the white body shell needed a little bending with a pair of pliers to get it back into shape. At some point, it had been slightly caved in, damaging the door, but after a couple of minutes I had it pretty much straightened out. 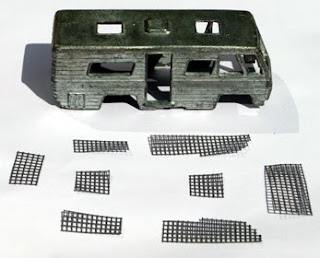 So... what do we need to protect us from zombies? One of the most obvious requirements is something to stop attackers climbing in through the windows. This mesh came from a model railway shop, and seemed like just the thing. It sticks quickly and easily using superglue (cyanoacrylate), in this case applied carefully using a cocktail stick. The mesh was cut to size, constantly checking against the vehicle to make sure it matched the shape of the windows. I've already used some of the mesh for fencing around one of my shacks. 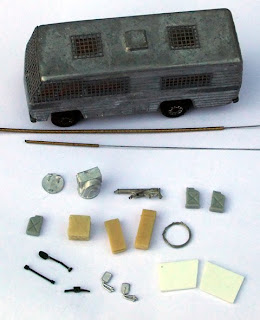 Here we have the motor caravan with the window grilles stuck in place. I have also assembled a collection of useful items from my bits box, mainly 1/72 and 1/76 scale WWII and modern accessories in resin and white metal, with a few left over kit parts. Let's see what might come in useful during a zombie apocalypse... 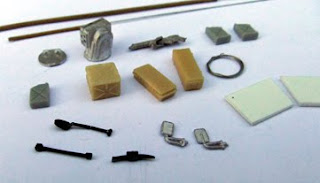 From top left to bottom, left to right, we have the following items:
Thick cables/hoses (ie. guitar strings - 2 sizes)
Hatch (spare from Old Crow Glaive APC)
Missile launcher (another spare from Glaive)
Vickers Machine gun on vehicle mount (Continental Model Supply Company)
Jerrycans (I think these were from an Italeri WWII accessory set)
Another jerrycan (from the same set - being a different style, this one will probably be a water container)
FV432 stowage box (CMSC again. One sits either side of the rear door on an Fv432)
Generic stowage box (CMSC)
Wooden ammo box (CMSC)
Wire coil (hand made from fine fuse wire)
Shovel and disassembled pick-axe (from an old Matchbox Challenger MBT kit)
Wing mirrors (CMSC)
Dozer blade (cut from plasticard) 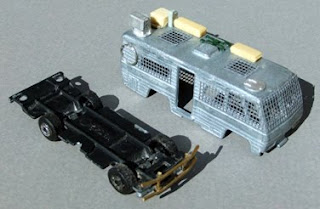 Assembly almost complete! Some items have been dropped, others added. The bulldozer didn't really work, so I've built some bull-bars from brass rod instead. These have been superglued to the chassis, sitting in a couple of grooves cut in with a steel file. 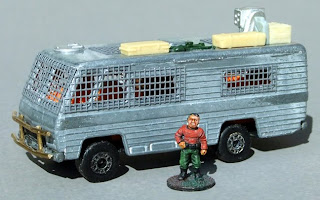 You can see the hatch added at the front, over the passenger seat. I had intended to fit the machine gun here, but there wasn't really enough space. I've saved it for another time. I also left off the wing mirrors as I didn't think they'd survive rough handling during a game. 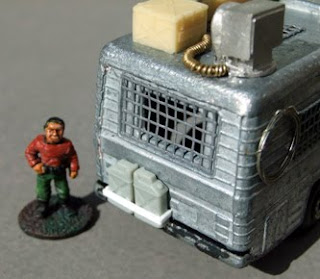 Spare fuel cans go on the back. At this height, they're easily to hand when you need to refuel in a hurry- or quickly burn out a nest of zombies. You can also see the heavy duty cable linking the missile launcher to the stowage bin. 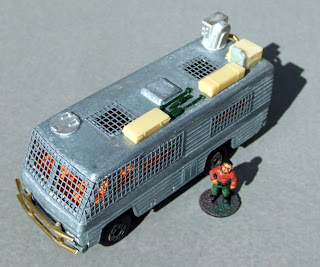 The top views show the tools tucked safely between the front stowage box and the wooden crate, and the water container by the rear stowage bin.

The interior will certainly need to be repainted. It definitelyl needs to make it into the finished vehicle; although nominally 1/114 scale, GZG's seated NAC marines look pretty comfortable.
Posted by Paul at 18:05 2 comments:

Yet another item which was dug out of my old toy box while on holiday was this old Matchbox Container lorry. Although the lorry clearly isn't 15mm scale, the container itself is another matter... 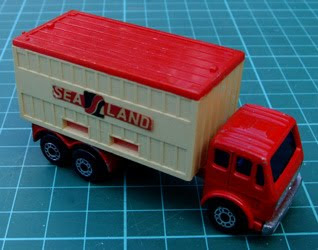 Here is another view of the container. With the labels removed, you can see it has discoloured with age! There are a couple of small holes underneath which fit over metal pegs moulded as part of the lorry chassis, thus holding it in place. Incidentally, somewhere else in the toy box must be my old Matchbox forklift truck. The designers cunningly planned it so that the forklift spoons fit precisely into the lifting points on the container, allowing you to unload it using the raising/tilting forks. 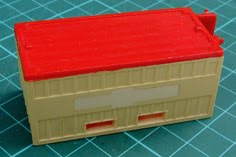 Basic preparation consisted of a wipe with white spirit to remove any remaining marks from the sticky labels on the sides, followed by a quick sand with fine-grade wet & dry. After a scrub with warm soapy water & a toothbrush it was ready for painting, in this case using Inscribe acrylics. I originally painted a base coat of "Forest Green", but for some reason this just didn't look right. I re-coated it with a 50/50 mix of "Raven" black and "Ultramarine" blue, and drybrushed several successive layers, each with slightly more "Snow" white added. I'm much more pleased with this weathered effect. 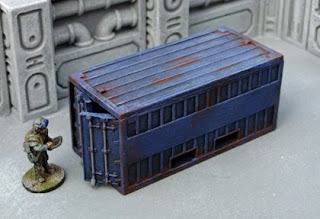 The bare metal locking bars were painted with a 50/50 mix of Humbrol acrylic 64 light grey and 32 dark grey, with a slight 64 light grey highlight. I decided to go for this dull grey colour rather than a metallic finish because most containers you see are pretty weather-beaten, with no real shine on any of the bare metal parts. As you can see, the doors open, giving added play value! 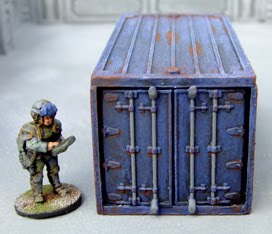 Rust was added by carefully painting watered-down "Burnt Umber" brown along the base of the container and in the recessed areas on the roof, where water might gather. Extra paint was added around the fork-lift points where damage might occur, and a gentle drybrush around some of the corners/edges added some extra wear. All the rusty areas were finished off with a little "Burnt Sienna" orange, just to bring out the areas where the most recent oxidisation would have occurred. 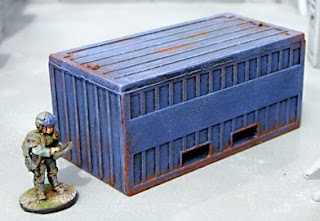