Once more our intrepid band of adventurers set off into the gloomy depths.  This time they must find the evil Chaos Sorcerer before he can enact his terrible rites and use foul magicks to summon a fearsom monster!  2 fellow adventurers have been taken prisoner and are to be sacrificed as part of the ritual.  Can our friends reach them in time?

Things start off well until the dwarf gets distracted by an interesting tomb in a room which is suspiciously empty of monsters.  "I wonder what's in here?" he mutters, reaching towards the tomb.   "No, don't open the.." scream the rest of the party - but too late!

After fighting off all the skeletons, our slightly more battered party make their way into a room filled with intriguing chests, barrels and crates.  Time for some serious looting!  Unfortunately, the wizard happens to open the crate with a magical trap... bamff!  He vanishes in a puff of purple smoke!  Where has he gone..?


Taking advantage of the Goblins' sudden shock, the wizard heroically turns tail and sprints as fast as his scrawny legs will carry him!  Quick down this corridor, there's a room ahead.. uh-oh!  This one has Orcs in it!  Right, back the other way, duck into the sewer tunnels!


Ahead, the wizard spies a much larger room.  Some sort of Chaos rune is anointed upon the floor.  Dashing into the room he discovers the Chaos Sorcerer on a balcony, chanting an incantation to summon a fearsome monster.  The Wizard casts his spell to summon a genie to attach the sorcerer!


Time for plan B!  The wizard rushes down to the first prison cell.  Peering through the keyhole, eh can see a female adventurer.  Casting "pass through rock", he helps her escape from the cell.  She leaps into action, attacking the sorcerer and distracting him from his summoning.  Meanwhile, zombies shamble forwards from the darkness to attack the wizard... 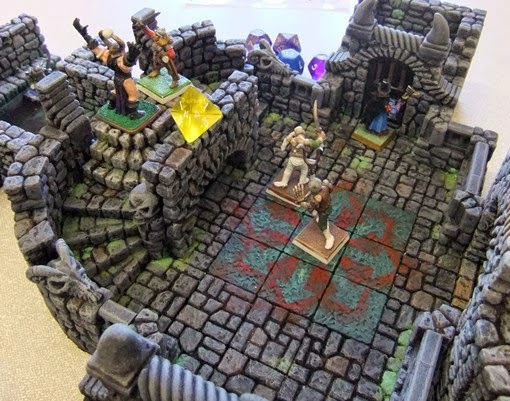 "But what of the others," I hear you ask, "what fate has befallen those on the other side of the dungeon?"  Having opened and closed all the treasure chests several times, just in case it would send them to wherever the wizard had gone, the dwarf and the swordsman gave up and carried on with their looting and pillaging. 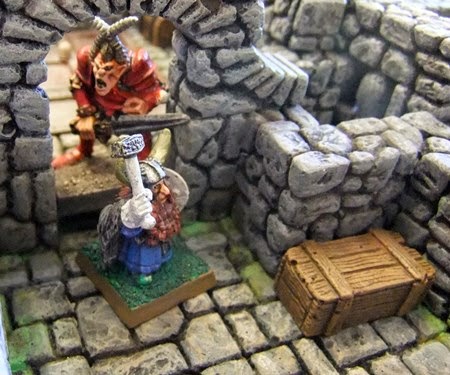 Back to the wizard... with the Goblins now streaming into the evil Sorcerer's lair, the wizard and the swordswoman retreat into a small store room which they hope to defend until help arrives.


The swordsman leaps towards the Chaos Warrior.  "I'll save you," he cries!

As the swordsman's body dissolves in the blood pool with a fizzing hiss, we return to the action on the far side of the dungeon...

Free from distractions, the Chaos Sorcerer has finished his summoning spell and a mighty Earth Elemental appears.  With a single bone-splintering blow it pulverises the swordswoman to a bloody pulp.

At last the Dwarf has found the corridor that connects the two parts of the dungeon, but alas!  He is too late!  Bellowing with rage he charges in, but the sheer number of Goblins overwhelms him.  Alone in his cell, the halfling shivers in terror - he heard loud cries, the crash of blades followed by a mighty roaring of a fearsome monster!  Who knows what fate has in store for him...


So... the adventure ends in defeat for our heroes!  The teleportation spell trap proved most confusing and the heroes spent a long time exploring the wrong way before realising how the 2 areas connected.  Perhaps they'll be luckier next time.