As you may recall from my post back in August, I found these 2 AT-TEs in the local charity chop.

An hour or so with some brass tube and a suitably sized pin-vice drill has substantially improved them!

All the stumpy little guns have been hacked off and replaced with more fearsome, longer-barrelled cannon.  Years ago this would have taken me hours with a hacksaw, sandpaper and probably some swearing.  Fortunately someone showed me how you cut brass tube by simply scoring it with a sharp knife then snapping it off, much easier! 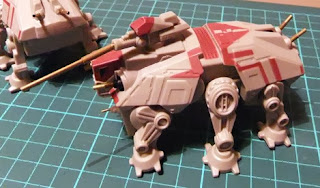 The main gun has a very long barrel (drooping here because it's not glued in place yet) replacing the stubby old barrel.  Upper hull guns have been drilled out and given bigger barrels with sleeves.  The lower hull ball-mount guns have a single piece of very fine tube inserted into the end of the existing gun barrels. 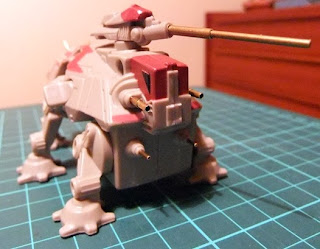 The rear upper hull ball-mounts have sleeved barrels added the same as the front upper hull mounts.  I imagine these rear ball mounts will be used in an anti-aircraft role as well as anti-infantry.  I've posed them pointing in different directions to demonstrate their independent targeting. 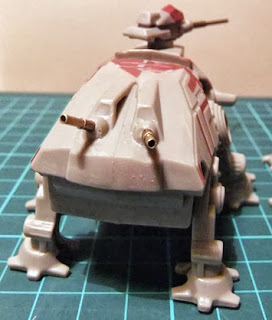 After a plain white undercoat, hand painted, they've had a base coat of old GW red gore and Vallejo matt black.  The red areas have been washed with watered down Vallejo sepia ink with some extra lining around some of the more prominent panels. Black areas have been drybrushed with Humbrol 32 dark grey. 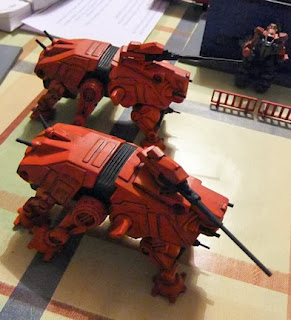 The next task will be to work out appropriate markings for them followed by weathering and other detail.  Should it have a cockpit window or is it fully enclosed with only sensor ports visible on the outside? 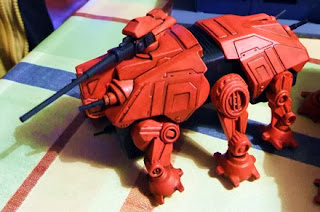