Here is a colour scheme test for one of 15mm.co.uk's skeletal robots from their HOF30 Automata Infantry set.


I wonder, can anyone tell me the inspiration upon which I've based this design? 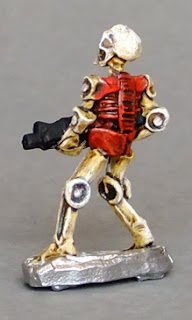 Nice figure, lots of detail.  Shame the gun is just a big chunky box though.  When I've obtained some more washers of the correct size he'll have his base filed down and get stuck onto one to match my other figures.

Although the loss of a DropShip at Olbuck Reach grabbed the main headlines, another aspect of the action highlighted something that troops on the ground had been complaining about for several months - the comparative fragility of the Badger patrol and liaison vehicle.


Originally conceived as a light armoured vehicle for urban patrol operations, the Badger is a 6-wheeled personnel carrier.  Its purpose is to provide a safe means of transport through potentially dangerous areas.  The appearance is relatively unthreatening compared to standard, armed personnel carriers and the wheeled chassis does not damage roads and pavements in the same way that a tracked vehicle would.  The interior is not as spacious as some troop carriers, but air conditioning and good suspension mean that it remains a comfortable vehicle in which to travel, and the large rear doors give fast and easy means of egress.  4 of the 6 wide-tyred wheels are powered, giving good mobility off road, and a large engine gives a good turn of speed.  Though unarmed, the Badger carries a top range communications system that has been continually upgraded throughout the life of the vehicle.

The drawback of the Badger has always been its relatively thin armour. The ambush at Olbuck Reach demonstrated this.  Rebels hiding in staggered positions in buildings to either side of the main street fired anti-tank missiles into the lead Badger, instantly disabling it and injuring some of the occupants.  When the second Badger moved forward to engage the rebels, it too was disabled.  Fortunately the Marines were able to move forward and clear the rebel firing positions, but the damage had already been done.  Deprived of their transport and unable to reinforce the SAM battery defences in time, the Marines could do little more than watch in horror as the Rebels opened fire on the DropShip as it brought in reinforcements.

The Badger Life Improvement Programme addresses the main concern of the report, the vulnerability of the vehicle to portable and/or improvised explosive weapons.  The Badger's traditional role clearly places limits on the options available, it was not designed as a front-line combat vehicle and should never be exposed to modern heavy tank guns.  Urban security operations have recently shown that a tougher vehicle is required, so improvements are clearly needed.  Bar armour or ERA are deemed to give the vehicle too aggressive an appearance, but a detonation field significantly reduces the danger from anti-tank guided weapons, causing them to detonate prematurely before reaching the vehicle.  Countermeasures and IED countermeasures incorporate jamming systems to interfere with the targeting and electronic activation systems of ATGMs and IED/mines respectively.  Improved anti-spall linings applied to the inside of the crew and passenger compartments mean that the vehicle is hardened, and is considered a life saver by many crews.  To round the vehicle off, added to its already impressive communications and countermeasures suite are the latest state-of-the-art sensors, which should significantly reduce the chances of future ambushes being successful, especially when facing lower-tech opponents such as bandits and rebels on Gordon's Gamble.

I've finally finished my second Matchbox Badger personnel carrier.  It was looking rather battered when I got it.

This came from a second hand shop for about 20p, so I can't really complain at the condition!  What's most important is that it still has all its parts.

I knew it would need a fair bit of work to get it completely ready for action, but I think it's a great little vehicle that's well worth the effort.

As usual, I drilled out the rivets and pulled it to bits.  The axles needed slight straightening with a pair of pliers and the body shell had a long soak in paint stripper.

Following the paint stripper, the paint was all gone but there was still a lot of corrosion on the surface.  A week soaking in a bath of cola cleaned it up a little more, but eventually I had to resort to a good hard scrub with a Brillo pad !

You can see the finished result in tomorrow's post!
Posted by Paul at 20:48 No comments:

My final weapon team of the week.  I wonder, can you spot what's missing?

My mystery weapon team has a suitable gap to accept various spare weapons (or maybe their weapon has a cloaking device?)  Here they are with a couple of missile launchers.

The launchers come from GZG's SG15-HW5 heavy weapon pack.  The pack included a pair if tripod plasma guns too but I've only got the missile pods ready to use so far. 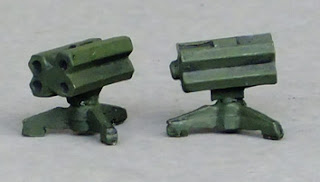 And so ends weapon week, but stay tuned for BLIP - the "Badger Life Improvement Programme"!  All will be revealed at a computer near you very soon...
Posted by Paul at 21:30 6 comments:

Although this may look like SG15-A14 RAM Mortars, a fair portion of it is actually SG15-A10 Command/Comms figures.

The original pack came with 2 kneeling crewmen with datapads (as seen in the team on the left) and 2 kneeling with magnoculars.  I'm assuming that in the hi-tech sci-fi age, they'll have a spotter who can advise on the fall of shot via com system (or the grid if playing Tomorrow's War).  This being the case, I've used the figures with magnoculars elsewhere and substituted the two female comms officers from the command pack.  Their nonchalant non-combat poses match perfectly with the idea of being on the mortar line well out of normal weapon range of the enemy.  (I've noticed there seems to be a lack of female front-line troops in the NAC.  Colonist/civilian and colonial security packs tend to have a 50/50 male/female mix, but these are the only 2 females I've spotted in the NAC military!)

Today's post features a couple of Gauss HAMR teams, the other half of the Ground Zero Games SG15-A12 NAC Anti-Armour Weapons pack (the first half was the GMS(L) teams).

I assume that HAMR is an acronym for "Heavy Anti Material Rifle", although "High Acceleration Magnetic Railgun" also fits.

You can tell that this is one of the first teams I put together from the fact that I have only used the figures that came in the pack.  The very flat appearance may be more authentic for troopers hugging the ground and keeping in cover, but it's not as interesting to look at as most of my other weapon teams.  If I get another set, I'll probably use a couple of different assistants to add some variety, and perhaps one of the matching gauss ammo boxes from accessory pack V15-ACC01.  Being a railgun, I suppose it's actually a high capacity battery rather than an ammunition box, but you know what I mean...
Posted by Paul at 19:55 1 comment:

I think I received SG15-A13 NAC Tribarrel Autocannon Teams as a freebie with a larger order from GZG during one of their special offers.

To start with, I based the figures but left the weapon separate (having made sure it would still fit!).  When I covered the base in putty, I waited until it was well on the way to hardening before moistening the base of the gun and pressing it onto the base in the correct position.  This left a good clear impression showing where to stick it afterwards.  I avoided that area during texturing & painting the base, then it was easy to glue the tribarrel on after painting.  Made it much easier to paint the figures without the gun mount getting in the way!

I'm away on Monday night, so I'm posting it tonight instead!

Today's offering is a GPMG gunner with a spotter assisting him.  I've replaced the gunbarrels on all my NAC gunners with small pieces of brass rod.  This makes it easier to identify who has the support weapon in the squad.  I'll probably paint the edge of their bases a different colour at some point, buy I like the look of the heavier barrel anyway.  When I was speaking to Jon Tuffley the other day he said that it's difficult to cast them with longer barrels like this because too often the metal cools before it reaches the end of the mould. 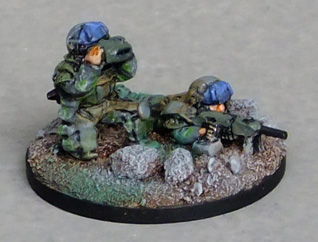 I preferred the figure mix of this SG15-A09 NAC SAW gunners pack to the more recent UNSC SAW gunners.  The NAC pack consists of 2 each of 4 different poses, only one of which is prone, but the UNSC have only 2 poses, meaning half the pack are prone.  The NAC pack makes for a nicer variety of figures in each squad. 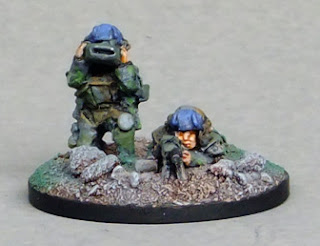 I have another waiting to be glued to his base when I've selected a suitable assistant for him. As before, I've used a 2p piece as the base with some of the larger chunks from a bag of sharp sand as the "rocks".  For use in Tomorrow's War, I'm treating this as a GPMG rather than a SAW - it makes sense for it to get an extra firepower die if it's set up on a bipod for sustained fire (yes, I know a real L7A2 GPMG has a tripod for this purpose but I'm working with the figures I've got!).
Posted by Paul at 22:36 4 comments:

The Guided Missile System (Light) comes from the Ground Zero Games SG15-A12 NAC Anti-Armour Weapons pack.  You get 2 GMS(L) firing posts with attached gunner plus a couple of gunner's mates ready to fix the next round onto the firing post.  The other 4 figures are Gauss HAMR gunners + assistants - post to follow later this week.

I thought I'd be a little more creative with these weapon teams, so I've added some spare missile rounds to the bases.  They're made from brass tube with a small plasticard carry-handle on top and the ends stopped-up with epoxy putty.

One of the launchers has already been used, you can see the burnt-out tube discarded next to the firing post.

I've been working on some weapon teams recently.  This is a couple of prone GMS(P) troopers from the Ground Zero Games SG15-A11 NAC Support Weapons pack.  They are armed with the Guided Missile System (Portable) for anti-personnel and light anti-tank work.

I don't usually use prone figures as part of my infantry squads, so I have an ever-growing collection of rarely-used troops.  You'll probably have seen the recent discussions on this topic over at Dropship Horizon.  I've decided to start turning them into weapons teams.

I've selected a couple of figures from the SG15-A10 NAC Command/Comms pack to act as spotters.  The figure bases are trimmed down as required and stuck to a 2p piece with epoxy resin.

Some cheap 2-part epoxy plumbers' putty is used to smooth over the base, then a few small rocks followed by a sprinkling of sharp sand.