My OUDF forces are sadly lacking in support weapons, so I have some GZG RAM mortars to give them a little extra firepower.

The plan is to mount them on bases with their support crew. I though they might make useful artilley pieces in 1/300th scale too.

Works progresses on the Afghan houses...

The one on the far right with 3 arched doorways will be some sort of meeting house (for far off sci-fi adventures) or mosque (for modern Asian/Middle-Eastern games). It will have a domed roof - once I've added enough layers of papier mache over the plastic ball former that I'm using! 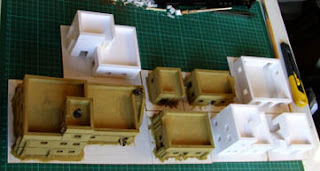 They've been painted with a thick & gloopy mixture of PVA and filler, cheap white poster paint and Windsor & Newton burnt umber acrylic added for colour. It gets painted on thickly, then stippled to give some texture. 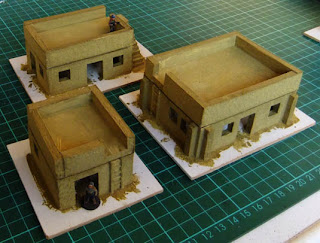 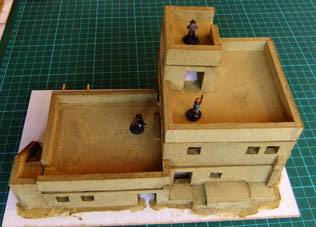 A large 3-storey building will be the centre of the settlement. 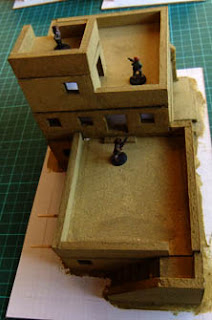 A few people for scale... 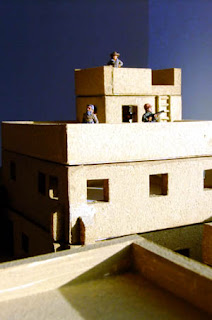 I've been painting a few lesser-known Ground Zero Games figures recently, some of which you may see on Jon's newly-opened web store.

First up, we have some NSL Jagers - SG15-N02. Click for larger images!

As usual for GZG figures, they were quick and easy to clean up, with very little in the way of flash or mould-lines. As one of the older 15mm infantry packs, it consists of 1 squad leader, 1 SAW gunner, 1 missile launcher, 2 "advancing" riflemen and 3 "advancing/firing" riflemen.

All are wearing long field jackets, chunky boots and the sort of jodhpurs that Terry Pratchett would describe as "trousers that look like they have a rabbit in each pocket". They have quite tall, peaked helmets which appear to have built-in comms, and their jackets incorporate some sort of back protection with a few technical gubbins attached.

Being of the older GZG style, the figures are on the shorter side of 15mm, and are quite chubby in comparison to more recent figures such as GZG's own UNSC or other companies such as Critical Mass Games. Their faces are slightly podgy, but I've seen plenty of motorcyclists who look just the same with their helmets on, so perhaps that is deliberate! Small arms are nicely detailed, though the one carried by the officer looks smaller than those carried by the riflemen This might just be an optical illusion - his left hand is quite large, so his gun might just look small in comparison.

I opted for a 2-tone grey scheme. Trousers and the front part of the helmet are base coated in GW blue-grey, jacket and the back of the helmet in Vallejo Cold Grey. After a Vallejo black ink wash, they received a drybrush of the base colours, followed by highlights. The blue grey received a GW Space Wolf grey highlight, the cold grey received a Vallejo stonewall grey highlight. Flesh is Vallejo dwarf flesh, GW flesh wash, Vallejo dwarf flesh again, then Vallejo elf flesh highlights. Hair was painted in various browns and sandy colours with brown or back washes followed by appropriate highlighting. Small arms, boots, the helmet peak and earpieces are all Humbrol 55 matt black with a Humbrol 32 dark grey drybrush to show the detail. If I were painting them again, I'd probably add some contrasting piping down the trouser leg too, but I wanted to keep these basic so they'd show up the detail in the figures on the web store. Thank you to Jon for giving me the chance to paint them for him!

Overall grade for these figures: B - Quite chunky compared to more recent releases, but a nice variety of weapons and poses. Cleanly cast, easy to clean up and plenty of character. With the jodhpurs, they'd make especially good dress-uniform guards for high-ranking officers! As with many of the earlier GZG figures, the lack of other packs of NSL Jagers means that if you wanted to field an army they'd start to look pretty "samey" after a while, but I realise that there is so much for Jon to do that further NSL figures are probably way down the list!
Posted by Paul at 17:23 3 comments:

Inspired by Force on Force and having read Attack State Red and a few other books recently, I've been building a few Afghan style houses. I'm using 5mm foamcore.

I've gone for 25mm high walls. This allows a 20mm high door, plus 10mm square windows, set 10mm above ground level, leaving a 5mm strip along the top to keep it all together.

I've cut one side of the card plus all the foam away at one end of each wall. 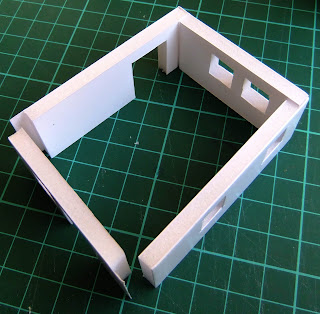 This means I get a nice butt-joint on each corner, giving stronger joints and smoother walls - no exposed lines of foam at the edges which will show through the texturing/painting. 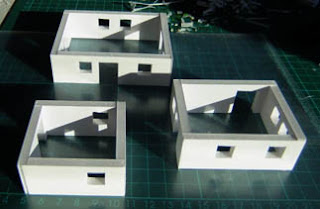 The basic buildings assembled - things are starting to take shape... 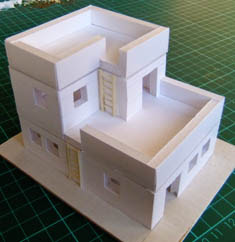 I'm giving them all a flat roof for now. I've gone for 1, 2 and 3 storey structures. Some have chopped-up matchstick ladders to provide roof access. 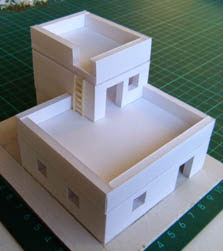 Others obviously have internal stairs to the first floor, then a ladder to the top. 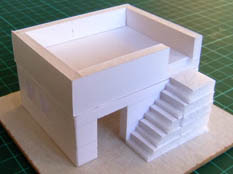 Some just have external stairs.

Each storey is separate, allowing me to position people inside and forget about them, thus losing the game because I can't keep track of where everyone is. 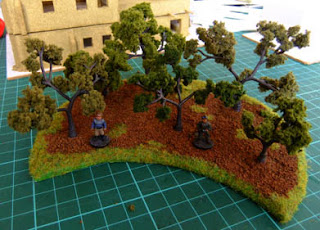 Trees have been glued into place with a cheap epoxy resin from Poundland. I use this for most of my basing work - it takes a bit longer to set than Araldite Rapid, but when all I'm doing is sticking people onto washers or slottabases this doesn't matter. More dried tea-leaf "leaf litter" has been added to conceal the bases of the trees, followed by some static grass around the edges so it will match the gaming boards we use. 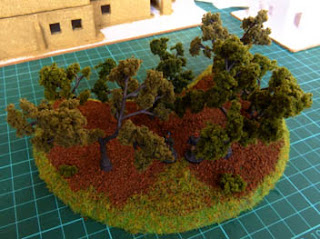 I've added the odd extra clump of grass here and there on the leaf litter, plus a small bush or two (woodland scenics clump foliage). 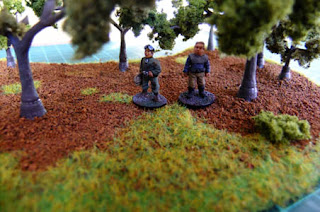 A GZG tech and colonist out for a walk in the woods...

I think I'll add a few more bushes, perhaps some reindeer moss too. I want to leave enough space for Flames of War bases though. I'll take this small copse to the games club next time I go and see how it looks. After that I'll carry on with the other 9 bases!
Posted by Paul at 17:38 1 comment:

Can't see the wood for the trees...

With the arrival of Flames of War at the Old Buckenham Bone Crushers, there is a lot more 15mm gaming going on in our area. Most of the club's forest is aimed at 25/28mm scale, so I've been working on something more suited for our smaller scale games.

Much of the scenery has been produced by Paul, the club's founder. He bases the scenic bits on circular bases, some of which have a semi-circular bite taken out of the side to enable them to fit together neatly. At the last club meeting, Paul gave me 10 bases he'd prepared using his normal template. 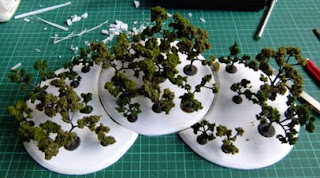 I want the woods to be fairly dense, but not so much so that you can't fit a FoW base into them. As I don't actually play FoW, there is a bit of guess-work involved! I'll need to measure a few bases next time and make some card templates to check against. 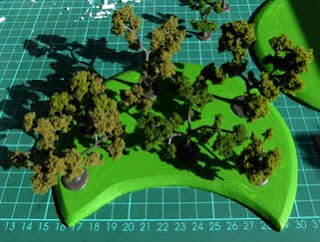 After sanding the edges smooth, they've received a coat of Dulux green paint as a base layer. The trees are Woodland Scenics plastic armatures with "clump foliage" stuck on with PVA. 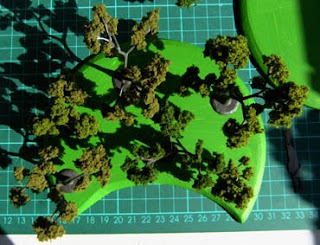 I've tried to work out which trees I want on this base as a test piece. 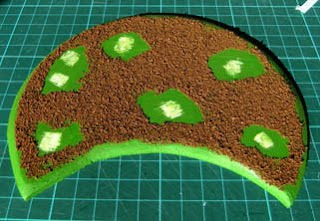 A coating of dried tea-leaves provides the leaf-litter on the floor of the woods. The base bits round the edges will have grass to match the game boards. I've scratched the paint away to give a good key when I glue the trees in.