As a belated final thought, I found these helicopters in one of the local discount shops.  At 99p each they're almost the exact correct scale for my Action Force project. 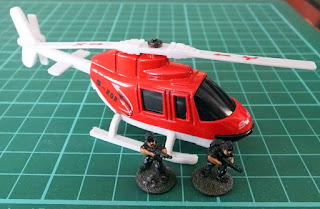 This red helicopter is a good size for landing an SAS raiding party. 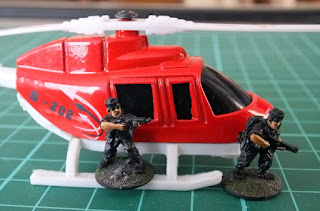 The Red Shadows were sometimes depicted with Russian Mil MI 24 Hind A gunships in the comics.  This certainly isn't a Hind but it will stand in OK and shares the 2-part windscreen.

The searchlight under the front will be cut off and replaced witha ball-mount chin gun made from a plastic BB pellet and a bit of brass wire. 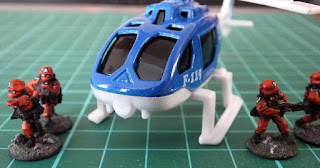 For Z Force I've got some slightly heavier helicopters than the SAS choppers. 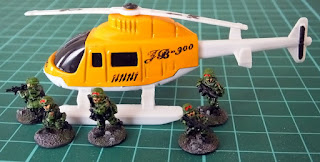 These have some nice details moulded into the windscreen as well. 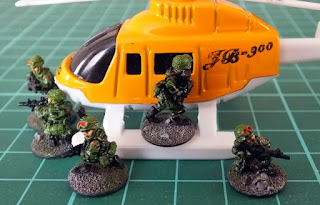 I've got enough to airlift in most of my Z Force and  Red Shadows.  There are only 2 helicopters for SAS Force but they're not likely to need such a large capacity for airlift anyway.

These will obviously all need a new paint job!
Posted by Paul at 13:04 No comments:

That's my initial Z Force unit completed for now but there are plenty more to come including additional AT-4s, M240 and M249 teams, infantry etc. 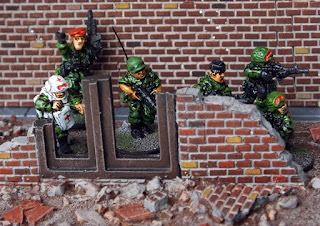 Being outnumbered by the combined Z Force and SAS Force troops I've completed, the Red Shadows need some reinforcements. 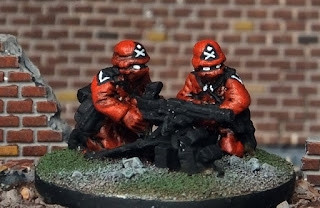 A Peter Pig MG34 team needed only a little work to turn it into a Red Shadow machine gun team, ready to suppress those pesky Action Force troops! 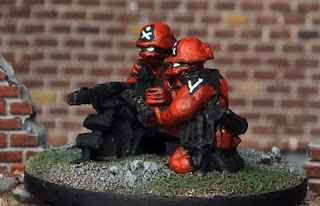 I've added a few support weapons to my Z Force unit, Peter Pig modern US again.  They're mounted on 2p pieces for use as weapon teams in Force on Force. 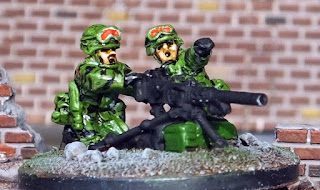 The Browning .50 cal teams come with some extra crew but they've been incorporated into the infantry.  3 crew per base would make it rather crowded anyway. 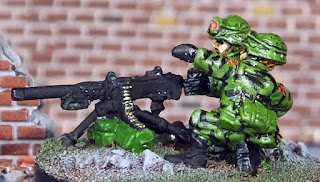 I also have some M240/FN MAG gun teams, though I haven't taken a particularly good photograph of this one!

Although none of the original Z Force action figures were armed with anti-tank weapons, for gaming purposes I'll need some.  These Peter Pig AT-4 troopers fill the role well. 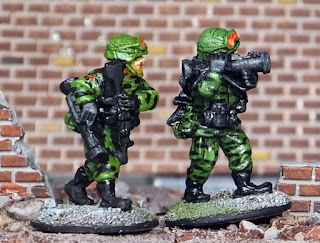 The chap on the left seems to have a Minimi/M249 as well as his AT-4.  They'll add some good firepower. 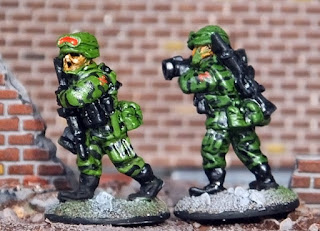 Codename "Tracker", Raoul Santilliana the Z Force Sapper was a repaint of the British Commando action figure.  He came armed with an M60 but I preferred the Peter Pig modern US M249/Minimi (which replaced the M60 in US service in 1995) and M240/MAG gunners to the Vietnam-era M60 gunners. 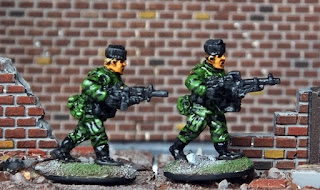 The only alterations to these are head swaps for British Commando stocking caps. 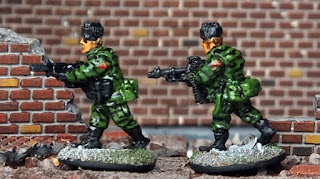 Obviously only one of these is Tracker, but I'm sure Z Force had more than one support weapon!
Posted by Paul at 22:40 1 comment: