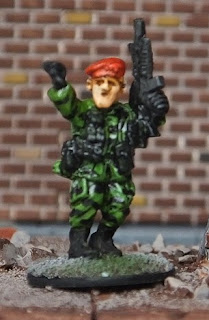 Skip is a Peter Pig modern US M203 grenadier.  His head has been swapped for a WWII para beret head, though for some reason it seems to have a Bruce Forsythe chin. 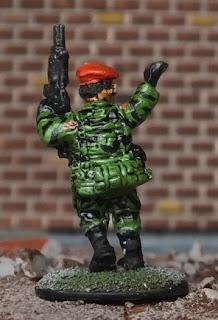 I prefer the M203 gunners to the actual squad leader/command figures Peter Pig make, I think they'll fit better with the small-scale actions I'll be fighting.
Posted by Paul at 22:02 2 comments:

Sven Inglesen, code-name "Doc" is an unmodified modern US medic. He has a white medical kit and white webbing, helmet and vest to match the action figure.  The figure had a large red "flare launcher" but I haven't tried to give him one of these, though I might experiment with another medic later. 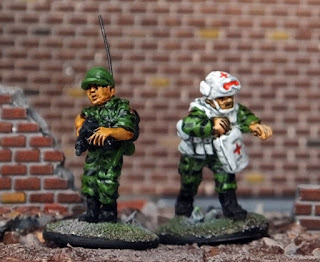 Radio operator Gianni Paulo Brazzi, code-name "Breaker", has been converted from a Peter Pig WWII 14th army sten gun figure.  He has a head swap with a peaked cap that came from a GZG figure which was the itself the leftover of an earlier head swap.  This gives him the headgear and weapon of his action figure counterpart.  A guiter string aerial turns his backpack into a passable radio pack. 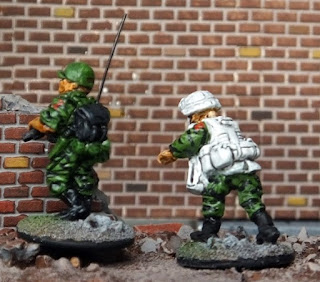 
Z Force launched the main assault on Ascendancy Island, taking advantage of SAS Force's diversionary attack to secure a beachhead and advance inland.  Once the bomb was located and dealt with, it appeared that the threat from Baron Ironblood was over.

It took a while to decide on which figures to use for my Z Force infantry.  As I mentioned in an earlier post, I've tried to go with the spirit of the figures rather than slavishly copying every detail.  The original Z Force infantryman figure came with an MP5 SMG, but those shown in the comics usually seem to have the FN FAL/L1A1 SLR.  An assault rifle is more practical for general combat troops than an SMG and Peter Pig professionals were one possibility - lots of great details with webbing and backpacks to match the action figure plus an SLR as the main weapon to match the comics.  The only problem here was the head, the bush hat doesn't match any of the action figures.

Rather than try to hand-sculpt the heads for 40+ 15mm figures, I went for the easier option of using Peter Pig modern US troops instead.  Heads and weapons aren't exactly right but they'll do for now!  Helmets aren't unprecedented anyway, Z force minesweeper "Scout" and medic "Doc" both had helmets, as did tank commander "Steeler".  A few head swaps will create a more varied force, red berets and black commando stocking hats being present on some of the action figures.  Many of the infantry pictured in the comics wore the commando style stocking hats too, especially on Vanyo's excellently illustrated strips "Desert Strike" and "Jungle Terror".  I will buy some more Peter Pig professionals and swap their heads for the spare US helmet heads and some more of the stocking cap heads to give me SLR-armed Z Force troops.  For now, the modern US have a great range of dynamic poses.

Base colour is Vallejo medium olive green with matt black webbing and tiger-stripe camouflage.  A 50/50 Pledge/sepia wash provides subtle shading, though my second batch seems to have come out rather darker thean the first ones.  Helmets don't have the camo striping, the hooded infantryman and minesweeper action figures just had plain headgear.  Red googles are something I particularly remeber from the action figure so that was a big reason for going for these specific figures.  Webbing, weapons, boots and gloves are black with a dark grey drybrush.  The final touch is a very carefully painted military stencil type red "Z" on the shoulder.  Trying to paint this 4 times on each figure (first in white on each shoulder, then overpainting both in red) was a real pain! 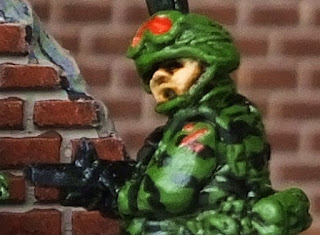 I've used Peter Pig WWII British 14th Army figures with sten guns and tommy guns for my SAS Force soldiers, the original heads swapped for British commando stocking cap heads.  These match the SAS force action figures fairly well, "Quickfire" having been equipped with a Thompson SMG.  The 14th army figures are carrying plenty of equipment which compares well with the action figures and ties in with their appearance in the Battle Action Force comics.  Some of the SAS action figures were finished in a grey and black camouflage pattern, others were all in black.  For the moment I've opted for the all-black colour scheme, I don't know how well the grey and black pattern would show up at 15mm scale but I might experiment with the next batch to see what result I get. 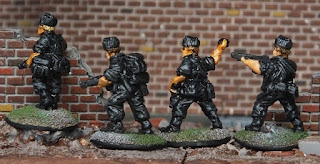 The disaster in Antarctica could have spelled the end of Action Force but fortunately the chance to redeem themselves followed quickly.  Baron Ironblood invaded Ascendancy Island, a small sovereign nation in the mid-Atlantic Ocean.  Concealing a nuclear bomb on the island, Ironblood demanded a ransom or he would detonate the device.


The Red Shadows are the footsoldiers of the evil Baron Ironblood.

These started off as Peter Pig late war Germans.  The Sg44 assault rifles are a good match for the weapons used by Red Shadows in the comics.  Heavy weapons will be a mixture of Panzerschrecks, which are close enough to the bazooka issued with the original action figure, and MG42 light machine guns.  All my Red Shadows have needed some conversion work to the helmet to create that distinctive shape.

Base colour for them all is my trust old pot of GW red gore.  A Vallejo sepia ink wash brings out the detail and prevents them looking too bright.  Weapons, webbing and boots are matt black with a Humbrol 36 grey drybrush.  Final details are the black triangles on the shoulders and helmet, followed by white edging on the collar, "V" shapes on the sleeves and a teeny-tiny skull and crossbones on the helmet.

*Update* - Found one of my Red Shadows, so here's what I was aiming to achieve... 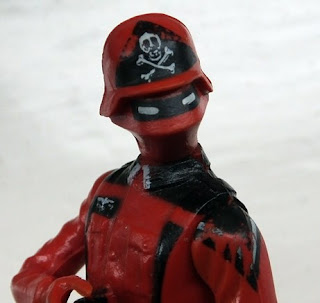 
With the ink barely dry on the Action Force treaty, the fledgling military unit was called into action in the Antarctic.  Being a continent over which no nation has control and governed by international treaty which prohibits military activity by individual nations, Action Force was effectively the only unit which could investigate attacks on research outposts by a man calling himself "Baron Ironblood".  At this early stage, the 4 fighting arms were not yet established and Action Force was still a disparate mix of different soldiers.

It was not an auspicious start for Action Force - ambushed by "Red Shadow" infantry working for the Baron, the Sea Kings of the investigating marines were riddled with bullets. 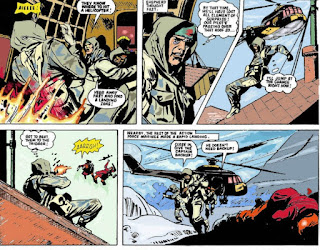 Quick thinking by one Action Force officer killed the ambush party but not before the Colonel leading the operation was killed.  The remaining Sea Kings were destroyed by anti-aircraft missiles launched from a hidden submarine and wave after wave of Red Shadows overwhelmed the survivors of the expedition.  Only 2 Action Force troops survived, John Shepherd and Chas Dillon, both experienced Royal Marines who had been plucked from their SBS training to join the new unit.  Baron Ironblood employed brainwashing techniques on both men and eventually Shepherd turned on his former colleague and joined the Baron.  Now known as the Black Major, Shepherd became Ironblood's trusted right hand man, leading the Red Shadows in many attacks.  He was at the forefront of their attack on a small Andean village which Ironblood had chosen to house his new lair. 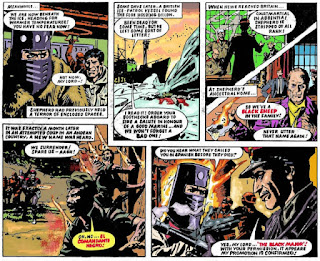 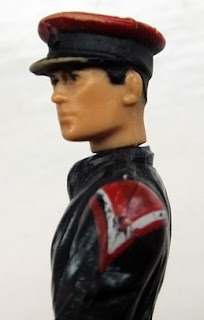 My Black Major is a Peter Pig German officer.  It's a fairly simple colour scheme, Vallejo matt black with a Humbrol 32 dark grey drybrush.  The boots are Vallejo black which for some reason always comes out gloss.  In this instance, I made a point of using it so that his boots stand out from his uniform.  Vallejo Dwarf Flesh face with mixed sepia/flesh wash and an Elf Flesh highlight.  The officers' cap is GW Red Gore with a Vallejo sepia ink wash, as are the shoulder markings.  A skull-and-crossbones logo on the chest finishes him off. 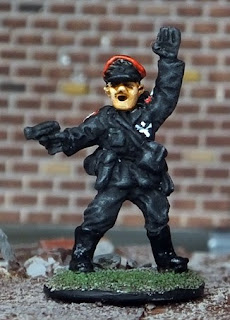 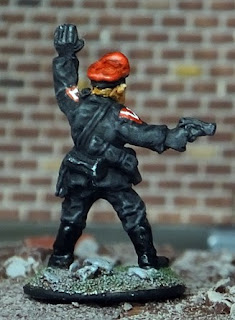