I've recently been working on a second batch of Old Crow Outrider grav scouts to add to my reconnaissance force.  The original 4 are all armed with the standard Old Crow missile pod / machine gun turrets, as seen below.


For the new Outriders, I wanted to try something slightly different but I couldn't decide on which turret style would be the best armament for them.  As luck would have it, I recently rediscovered my stock of 2x2 and 3x3mm Neodymium magnets, originally bought for attaching Full Thrust starships to their bases.  Sadly their original use didn't work very well, anything larger than a light cruiser being too heavy for the magnet to hold firmly, so I have a large supply which didn't get used.  Fortunately these will come in useful for my new project, I've already uses most of the 3x3mm cylindrical magnets to attach the turrets of my Glaive tanks, Claymore and Lancer heavy APCs.  The 2x2mm cylindrical magnets are ideal for these smaller turrets, just cut off the mounting peg on the turret, drill a suitable depth hole, dab in some superglue gel and drop in the magnet.


I have a good number of Old Crow mini-turrets.  Jez didn't have the metal gun barrels available when I placed my order so he threw in the mini turrets free with the idea that I can use some brass wire or something similar to make the guns.


Next we have a tribarrel mount from a GZG MAWP(W) (V15-24A).  The MAWP will also be magnetised, allowing it to share the range of armament options.  I've included a Peter Pig US Marine for scale, PP figures tend to be ever so slightly smaller than many Sci-Fi manufacturers such as GZG or Brigade/Armies Army etc.


You can see some of the extra stowage I'm using, Brigade Models' jerry cans (from set SF15-906) and Ainsty Castings' etched brass stowage baskets (from set HS1014).  The little grab handle is just a piece of wire glued into a couple of small holes.

Next up is one of GZG's new mini-turrets, this one with a pair of quad missile mounts, V15-ACC29.

The twin machine gun mount (V15-ACC28) looks like it will make a good point defence weapon.

Finally I decided to give my old groundmount medium missile battery (V15-25D) a new lease of life.  Long-time readers of this blog may recall seeing this on a previous occasion, way back in 2010!  This should be useful if there is something too large for the point defence guns to handle.

I haven't seen any comparison photographs of these different turret/weapon mount styles yet.  Although there are photographs on the GZG web site with a scale next to them, I never find it very easy to visualise how big they actually are without a person for scale. That said, here is a comparison photograph of all the turrets I'm using, along with my crouching infantryman for reference.  Hmmm... thinking about it now, a standing figure would have been more useful!  I'll take another comparison photograph soon, I have a couple of other mini-turrets to work on as well.

Once more into the dungeon...

Well, my hopes of having more games and posting a bit more before Christmas haven't turned out as planned, but never mind!  I have at least managed a bit more dungeoneering down at the Old Buckenham Bone Crushers.

Wizard, Halfling, Swordmaster and Elf venture into the depths.
The Swordmaster proves his worth, killing Goblins and Chaos Warriors.
Deeper into the dungeon they explore.
Chaos Beastmen prove cunning!  One moves menacingly towards the |Elf, swatting arrows from the air with his might sword and chuckling menacingly.
It was all a distraction!  While the Elf's attention was focused, another Beastmen crept round the side and now lunges to the attack!  Halfling and Swordmaster try to hold off another Beastman.
Eventually the Beastmen are slain.  Is there any treasure they were guarding?
An ignominious death as the Halfling finds a magnificent suite of plate mail in the cupboard, but is crushed to death as it falls on him. (He drew the plate armour equipment card but also a TRAP card).
Fortunately the nearby Wizard was able to revive the Halfling with a healing spell, so the quest continues.
Soon, the Halfling finds himself in a corridor full of doors. Which one to open first?
The first door he tries reveals the library.  Unfortunately there are currently a couple of Beastmen here and they don't look happy at the intrusion!
Disposing the the lurking zombie, the Wizard ventures into the room, discovering the hard way that one should never stand on the decorative tile in the middle of the room.  It invariably causes a spring-loaded spike to thud into your leg.  Ouch.
Despite his injury, the Wizard does his best to support the rest of the party.  He uses his Genie spell to open one of the doors the Halfling discovered.  A big, steel door that the Swordmaster was not strong enough to break down.  Removal of the door reveals WHY it was so strong - it was holding in a Cockatrice.
Freed at last, the Cockatrice lunges for the nearest target - the Swordmaster!
The rending talons and slashing beak of the Cockatrice prove too much for the Swordmaster who collapses to the floor in a welter of blood and shredded armour.  Before his death he just managed to weaken the Cockatrice for the combined attacks of the other heroes to finish the beast.
After a brief pause to regroup,heal their various injuries, re-animate the Swordmaster and share out the loot from the Cockatrice's treasure room, the heroes approach their final objective - the Evil Wizard in his lair.
Bursting through a side door, our heroes pile into the skeletal bodyguard.
Skeletons are smashed to smithereens, but alas!  The Swordmaster succumbs once more beneath their blows.
Now the Skeletons turn their wrath upon the Halfling but this pause give the Elf his chance.  Prising open the Swordmaster's cold, dead lips, he sloshes in some healing potion and his companion springs back to life!  Our heroes press home the attack, destroying the last of the skeletons and slaying the Evil Wizard before he can escape.
Evil defeated, the Halfling is curious.  What is this grimoire upon the Evil Wizard's desk?
The words seem to move around on the page.  The Halfling concentrates harder, staring intently at the page.  His lips move as he mutters the strange words under his breath but it quickly becomes hard for him to see as his eyeballs fill with blood and he suddenly collapses, convulsing, to the floor.

A lesson for all - do not meddle with the arcane magicks of the Evil Wizard!
Posted by Paul at 12:33 1 comment:


The 2 tonne A21 GEV jeep is a plastic-bodied, rubber/fabric skirted vehicle that the Slammers use for infantry support.  I ordered a couple of packs and Jez kindly threw in a couple of mortar jeeps too.  All have benefited from lots of extra stowage.  I was surprised to find that the jeeps are moulded with the crew in place.  There was a little extra cleaning up required around the crewmen but the rrsin that Old Crow use is very easy to trim away and it only took a minute or two for each jeep.  The gun jeeps come with tribarrels to attach, the cargo jeep has a small package of cargo to stick in the back and the mortar jeep is a single piece casting.

Lots of stowage in the back of my gun jeeps.  Brigade Models jerry cans and stowage boxes, hand sculpted tarpaulins, The Scene LAW (buzzbomb launcher for the Slammers).

Being plastic bodied, there is no reason for the jeeps to be silver like the big iridium armoured Combat Cars and blowers but I've painted them to match anyway, as in the Slammers rulebook.


The gun jeeps act as fire support for infantry on their skimmers.

More extra stowage in the cargo jeeps with Brigade Models jerry cans and stowage boxes and some hand sculpted tarpaulins.


These were easier to clean up than the gun jeeps because there is only 1 crew member!

Decals were easy to apply to the large flat sides of the jeeps, though tight trimming of the carrier film was necessary to ensure it didn't overlap the edges.

One of my mortar jeeps still needs a little work - there was an air bubble in the end of the mortar tube so I need to rebuild it when I get an appropriate bit of tubing.

Less stowage in the mortar jeeps but I added some extra ammo crates and a tarpaulin.

So that's the end of Hammer's Slammers week.  Hopefully I might manage to keep posting a little more regularly for the remainder of the year!  Maybe I'll even manage to fit in another game or two.

The Old Crow Slingshot GEV is acting as a command and control vehicle for my Hog battery. 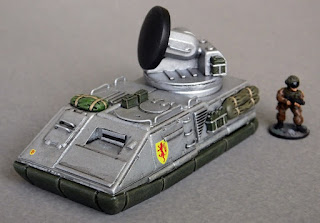 I've added lots of extra stowage to this one including a couple of tarpaulins, The Scene ammo boxes, Brigade Models jerry cans and various grab rails. 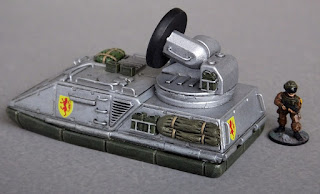 As with the other vehicles, this has a metalcote base coat and reflective green skirts.  No replacement panels here - these are flexible skirts rather than the steel skirts you get on a Combat Car or a blower tank.  A Pledge/black ink wash finishes it off. 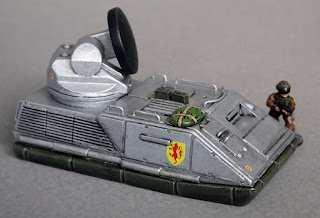 This vehicle has large flat areas that make it easy to apply the decals! 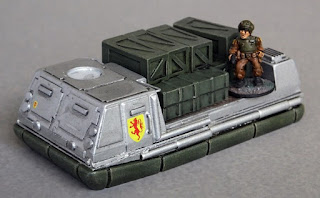 For extra ammunition transport for the Hog, plus any general spares required by my Slammers, this GEV truck will be useful. 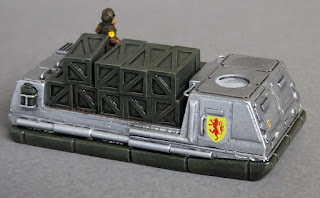 Not many additions to this one, just a few grab rails and a jerry can. 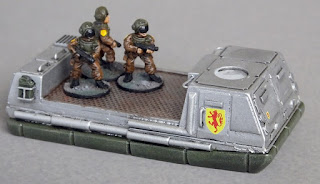 The stack of crates is removable so I can change the load as required for a scenario, or even use it to carry a few troops in an emergency. 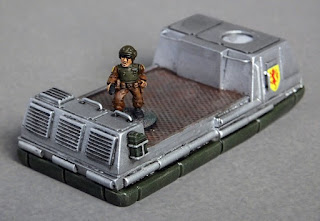 I realised while taking these photographs that I haven't added the top hatch!  I must dig that out of my spares box, or perhaps try a small turret.
Posted by Paul at 22:54 No comments: