At the weekend I was going through the Tomorrow's War rules for robots.  I've never got around to doing much with robots, but I have quite a few ready for action now.  They're mainly GZG, unsurprising given the huge range of robots they have available.

These will be operating with my OUDF forces.  I've taken a mainly wheeled theme with them - they use DLD Kamodo IFVs and have a wheeled scout car.  Giving them the wheeled drones seemed in keeping with this.  The drones received a coat of Humbrol matt 75 bronze-green with a matt 86 olive green drybrush.  Camo stripes are Matt 33 black with a drybrush of matt 67 tank grey.  Wheels and autocannon are also black.  Sensors on the gun mount are GW red gore and Vallejo gloss black (not sure if it's really meant to be gloss as non of my other Vallejo paints are).  The final touch was a light dusting of Humbrol 93 desert yellow.  Most of my robots have been mounted on 1p pieces which I've found to be just the right size.

These small drones can provide useful fire support when required.  The light autocannon they carry can be used to maul unwary enemy infantry, and it can also present a threat to lightly armoured and softskin vehicles.  The wheeled chassis may not be as manoeuverable as a tracked, walker or grav unit, but ease of maintenance is a big factor in its favour.  Most troops have some idea of how a wheeled vehicle works and can have a go at fixing problems in the field.  The software systems are also a good deal less complicated; the programs required to control a grav or walking chassis are substantially larger than those needed for a wheeled system.  Gun-mount stability is also a consideration; tracked and walker units are just as stable, but a grav mount can be more susceptible to "platform rock" from autocannon recoil.  Weight is also a important, the wheeled drone system being one of the lightest weapons carriers in common use.  Lower ground pressure means the cross-country performance is not too different from a larger tracked unit, and when every kilogram of mass on an assault lander has to be carefully accounted for, any chance to squeeze in extra ammunition or troops is important.

These drones are deployed in a variety of ways, sometimes acting as an additional squad member to provide fire support, but also being used as remote sentry systems or ambush units.  Their low height, similar to that of a crouching human, makes them easy to conceal in this latter role.

One of my most recent orders was placed during the sale at "The Scene".  I acquired a small patrol boat, a special forces team, a couple of packs of battle robots, some zombie hunters/survivalists, and some agents from the authorities.  I also tried a few of the miscellaneous items, some hatches to add to my buildings and a couple of packs each of ammo boxes and missile cases.


I was impressed by the speed with which the order arrived, despite a warning on the web site that it might take some time because of the backlog.  The models are very nice, plenty of detail and full of character.  I've got a backlog of other GZG, Rebel, CMG and 15mm.co.uk models to paint, but I couldn't resist making a start on a few of the new arrivals.

The US Special Forces are coming along nicely, here are the first 4 nearly finished (SF04, SF01, SF07, SF02, plus SF05 didn't quite make it into the photograph).

The patrol boat (B001) was very easy to clean up and put together, just an evening's work to paint.  I'm thinking that some of GZG's seated NAC marines might go nicely with this kit, and one of the standing gunners will fit behind the machine gun (though he might need a small box to stand on to reach the right height).  It's already taken part in one battle, but sadly the enemy never approached the river closely enough for me to use it! 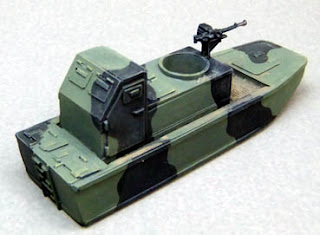 My heavy battle androids (HAD001) are almost finished too, they're going to be special assault cyborg troops for one of my armies.  I have already got some Tomorrow's War stats worked out for them.
Posted by Paul at 23:45 3 comments:

Well, my pre-ordered copy of Tomorrow's War arrived from Amazon last weekend, and I played the first game on Sunday at the Old Buckenham Bone Crushers.

An exciting battle, 8 powered armour troopers (CMG Kaamados Vivipara and Agaamids) moving in to rescue 2 pilots from a crashed VTOL, GZG NAC Narines and DLD Kamodo IFVs trying to stop them.  Marines ended up getting slaughtered so we started bringing in reinforcements from the second turn.  I had seeded the area with hotspots as I suspected this might happen!

Weight of fire gradually wore down the powered armour, I'll try and write a more complete battle report and pop in a few photographs too.

So far I'm very impressed - the rules are better laid out than Force on Force, and I haven't found any typos yet either.  I've written a review on Amazon, which you can find here.

My overall grade for this set of rules : A

It would have been an A+ but for the rather major omission of a quick reference sheet which meant that I was spending a lot of time flicking back and forth through the book for much of the game.  As a result, reading bits of rules quickly and out of sequence meant that we got a few things wrong (for instance for each vehicle hit after the first we added +1 to the die roll rather than raising the die type one level) but by the next time we play I'll have had longer to digest the rules and I'll have printed out the QRS on AAG's web site.
Posted by Paul at 09:56 1 comment: