With the internal security situation continuing to worsen on Gordon's Gamble, the planetary governor has requested additional support. Task Force JUNIPER has been dispatched, and is working in conjunction with local security forces to try and counteract rebel activity.


Here a marine DropShip skims in low over the forest near Bailey's Beacon. Intelligence has pinpointed a small rebel group operating from some old mining buildings, and a strike detachment has been sent to investigate. Bailey's Beacon is the planet's main spacefield, and rebel forces cannot be allowed to operate this close. 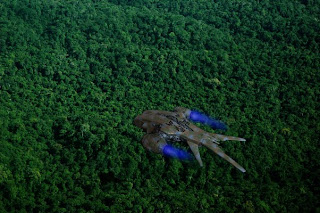 The marines deploy from their DropShip into a small clearing. The DropShip will remain on-station in case emergency CASEVAC is required. 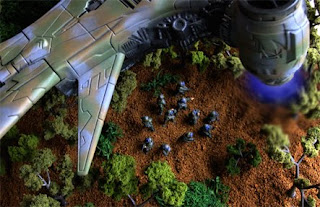 No sign of the Rebels yet - everything is quiet. The marines prepare to advance into the forest. 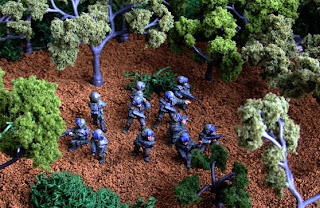 The section leader receives a com report. "That way!"

They run into a small rebel force as they approach the buildings. "Contact - wait, out!"

The rebels put up stiff resistance, but are armed mainly with shotguns and pistols. 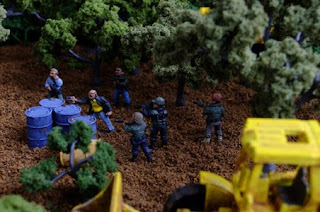 The marines take cover and return fire. With assault rifles and squad automatic weapons, they have overwhelming firepower, and will soon prevail. 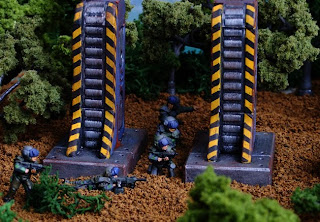 The surviving 2 rebels take cover within the buildings, but will not last much longer.

Task Force JUNIPER's first operation has been a success - but this is only the first in what could be a long, drawn out campaign...
Posted by Paul at 09:49 3 comments:

A pair of DLD Kamodo IFVs move out on patrol, watched by GZG NAC Marines. 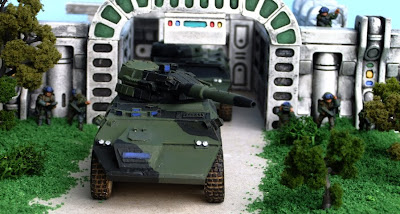 I've been having a play with my camera... GZG New Israelis on the move, supported by DLD Kamodo IFVs.

Scenery from a variety of sources; trees by Woodland Scenics, architecture by Hirst Arts, groundwork from several Tesco tea-bags!
Posted by Paul at 18:38 No comments:

Another day, another piece of Hirst Arts scenery...

This uses parts from the Starship Walls mould #301. It was originally built to go with Star Wars style 25/28mm scenery, but works well with 15mm too. Both sides and both ends are painted, so it can be used this way... 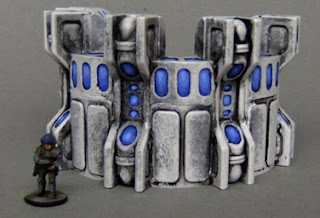 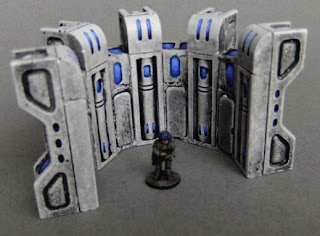 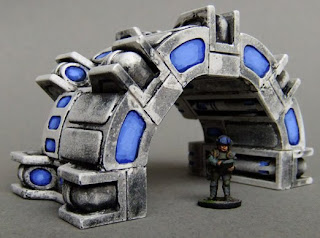 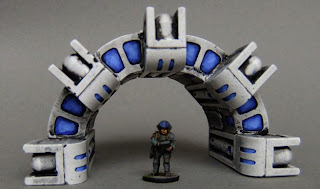 It's been spray-painted with £1 shop matt white car primer, covered with cheap black poster paint, then polished off to give a "once pristine but now dirty & well-used" look. The glowing blue lights are added with Inscribe acrylics, ultramarine with a dash of snow for highlights. I'd imagine it to be some sort of mysterious item of machinery for the first couple of photographs, but the lower 2 remind me of a CAT or MRI scanner. Perhaps some sort of full-body walk-through scanner in the quarantine entry system for new arrivals at the starport? This is the "Whitegate" of this post title.
Posted by Paul at 18:36 No comments:

Just a couple of figures...

Not much this week - I need to have another photo session, running out of pictures! 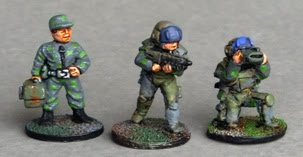 I've recently painted this GZG tech/starship crew member. He's going to be supporting my NAC marines, so his overalls are painted in the same pattern as their uniforms - Humbrol dark grey with GW goblin green patches and a light drybrush of Humbrol light grey over the top. As the marines are wearing body armour, their sleeves are the only part which shows the uniform in this photograph! 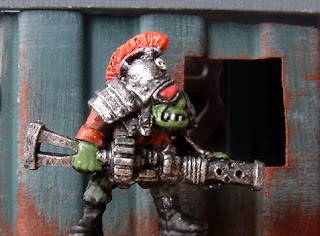 One of my older 15mm figures - a Shia Khan goblin Malig from Alternative Armies/15mm.co.uk. When I got my figures, they were in a pack of about 20, ready for their old Firefight rules, but these days they've been split into 2 groupings, some classed as heavy weapons. I used to play firefight quiet a bit; very easy to pick up, a cinematic feel to the action and it also included very good solo play rules. I mainly played in 25mm scale, but did pick up a pack of 15mm Crusaders and this pack of Maligs too. 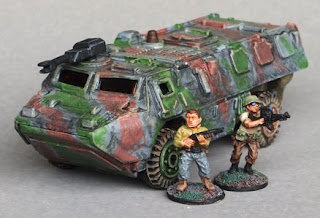 This French VAB was something of an experiment, inspired by Paul Owen's article about painting KraVak grav tanks as seen on the GZG web site.

Here is the VAB as purchased, 10p in the local charity shop - was probably part of a cheap bulk "army vehicle" set when originally sold. I've always liked the VAB body shape, I prefer the 6-wheeled version but this one will do for now. Reminds me of the old Action Force troop carrier. 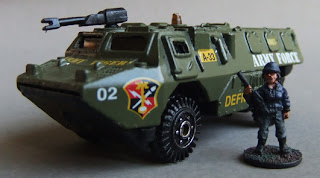 First thing to do was drill out the rivets and disassemble. After a quick dip in paint stripper and a scrub with an old toothbrush and hot soapy water, the metal body shell had a grey spray undercoat. 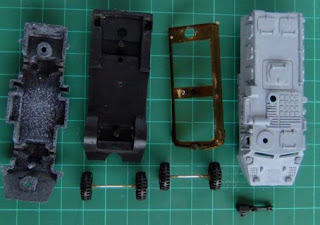 Re-assembly was easy, the only awkward bit was heating a screwdriver blade to melt the base of the gun-mount pin, fixing it in place. Rather than re-riveting I just used epoxy resin. There was a large rivet-hole under the front glacis plate but I covered this with a large plasticard trim vane as seen on many amphibious vehicles. 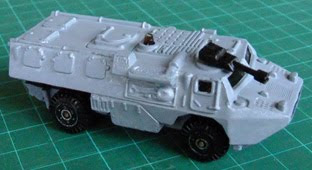 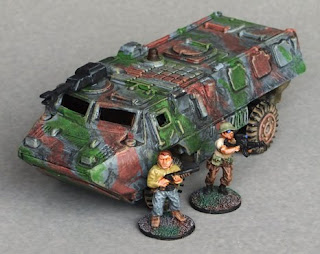 A wash of heavily diluted matt black provided shading, then I drybrushed the whole thing with Humbrol 93 desert yellow for a dusty finish. Headlights are painted silver, other bits such as the horn and shovel head are GW chainmail. Tyres were painted Humbrol 29 dark earth, then drybrushed with matt black. I hope that's given the effect of road dust/dirt stuck in the treads. 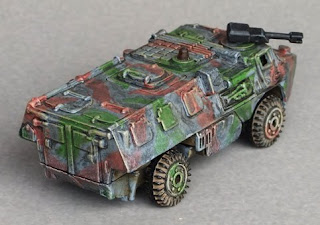 A worthwhile experiment - although the initial paint job looked very harsh, the shading and drybrushing have blended it together well. Looking back, I shouldn't have left the camera set on the colour-boosting "Fuji Velvia" setting - the colours aren't this vibrant in real life, so it looks rather more subtle than it does here!