Finally finished my other GZG NAC Marine support weapon team.  The figure on the right has had his base trimmed so that he fits neatly next to the prone gunner. 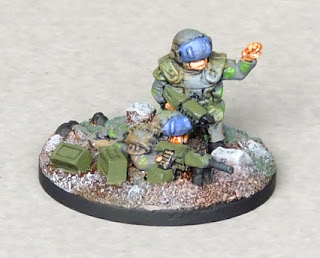 The ammunition boxes come from "The Scene" in a pack of 10 and are ideal for adding a bit of character to vehicles or figure bases like this.  Yes, I know that they don't match the one the gunner is already using but I think that he was using a lightweight ammo hopper in the mobile role and is ready to switch to larger boxes now that he's in a sustained-fire position. 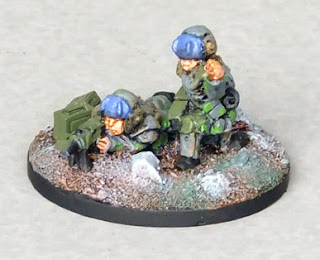 As with all my NAC support gunners, the barrel has been replaced with a bit of brass rod to make it easier to identify as a heavier weapon - though in this case it's pretty obvious anyway because he's been based up with his buddy as a weapon team. 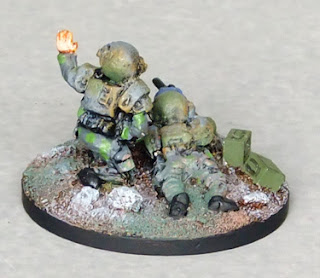 I've had some of Ground Zero Games' snipers kicking around for ages.  I've followed my usual colour scheme for them - grey fatigues with green camp splodges, brown armour with green and grey drybrushed camo patches. 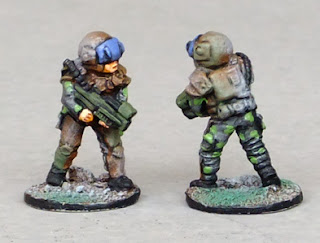 It makes a change to have a sniper with a weapon that's something other than along-barrelled version of their normal rifle.  In this case it's a laser system as you can see by the power cable and the stubby shape.  If you really wanted a long barrel (perhaps to make it easier to tell the sniper apart on the battlefield), the chunky nature of the weapon would make it easy to drill a hole and pop a bit of brass rod in.

I've done a couple of weapon teams with the prone sniper figures, will post them in the next few days when I've had a chance to download the photographs.
Posted by Paul at 19:52 2 comments:

These 3 cars came from the local charity shop for about 10p each.  Though I'd initially disregarded them because they're pretty poor quality pressed (not die cast) body shells, I reconsidered and decided to splash out.

My thinking is that they'll make good grav-cars for a futuristic city.  The wheel arches aren't flared and the bodies just pop apart so the plastic wheels fall out.  Should be easy to fill the gaps with milliput or another epoxy putty then repaint and mount on a stumpy flying base to lift them 3 or 4mm off the ground.

Another advantage of being cheap and non-specific in terms of make, no-ones going to look at them and say "Oh, that's just a dodge charger with the wheels removed" or whatever. Plus if I screw this up completely, it's no great loss!
Posted by Paul at 19:03 3 comments:

This is V15-85A from Ground Zero games, a twin plasma cannon on groundmount with a New Israeli crewman.  His two buddies are from a couple of different infantry sets. 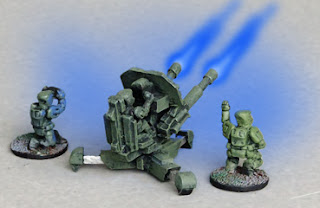 The kit is fairly simple to put together, it comes as a 3-legged groundmount, a seat/sensor unit, a gun shield and 2 gun barrels.  Plus the gunner of course.  It did need quite a lot of blu-tack to keep the bits in place while the glue set though... 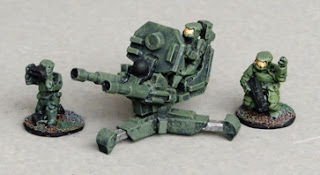 I've gone for a black base coat with a drybrush of Humbrol matt 75 bronze green plus matt 86 olive green highlights.  Visor is Humbrol gold.  Sensor dome Vallejo matt black.  I've painted the leg extenders in GW mithril silver - I assume they slide out and lock into position when the unit is deployed.

A nice little gun mount to add some fire support for my NI troops! 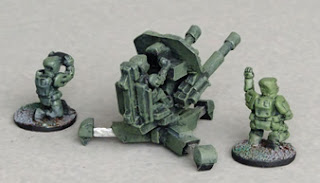 I'm very pleased with these skips from The Scene.  A good price, arrived quickly, nicely cast in a good resin.  The rubble filled filled ones needed a bit of cleaning up, small bobbles of resin where tiny bubbles had been left when the moulds were made but I can't see how you'd make a mould from such a rough texture without them.  Although I cleaned them off it probably wouldn't have made much difference if I'd left them there, the bobble were so small.  There was also the occasional bubble in the resin but a dab of PVA and a sprinkle of sand soon cleared that up.

I particularly like the scrap metal skip.  There's all sorts in there, bits from a Sherman tank suspension, corrugated iron, cogs and other bits.

I gave the skips a good scrub with a toothbrush and some washing up liquid before undercoating them with Vallejo primer.  Top colour is GW sunburst yellow with a Vallejo sepia wash.  Rust has been applied using Inscribe acrylic burnt umber with burnt sienna highlights followed by a rub with an HB pencil on the edges where the paint/rust has been worn away.

They're a nice size, light weight, quick and simple to paint and are a useful addition to my collection of scatter scenery.  I bought the bargain bag of 7 skips which I think came to about £4.40 which I think is excellent value for money.  (The skip full of general waste seems to have become separated from its fellow rubbish receptacles so unfortunately it doesn't feature in today's article!)
Posted by Paul at 18:07 3 comments:

A few more guerrillas for the ongoing rebellion on Gordon's Gamble.  Figures are all GZG colonists/civilians, from left to right SG15-V07 (armed civilians/colonists pack A), SG15-V02 (civilians/colonists pack B), SG15-V07 again.  The armed figures have received head swaps from SG15-XH2 (conversion heads pack 2).  Because the figures are female I went for the slightly smaller heads, in this case with night vision goggles.

I think it looks rather like the rebel leader clutching a roll of his nefarious plans, flanked by his 2 bodyguards.

The man in the middle has bone white trousers with a sepia wash, jacket is reflective green with bone white and GW vermin fur splotches.

I'm pleased with the head swaps, they've added a bit more variety to my rebels.  I think the camo on the jackets of the middle and right hand figures works fairly well.  The bone white and reflective green provides enough of a contrast for you to see that they're in camo from a distance but it still looks OK close up.  The right side camo trousers and left side camo jacket don't really work so well.  Although the camo looks reasonable close up, it blends together into a uniform greeny-brown from a distance so I probably won't bother with that type again.  The black flecks on the jacket are hardly even visible by the time I've applied the ink wash!  The ink wash has toned down the bone white very nicely so that it works with the other colours of the camo.

Still, a fun experiment and has given me some better colour combinations to use in the future.
Posted by Paul at 22:00 2 comments:

This large maintenance droid is typical of those used on frontier worlds.  Its robust construction is resistant to knocks and scrapes and the walking motive configuration handles a range of different terrain with ease.  Flexible manipulator arms enable it to perform surprisingly delicate maintenance work and a built in power source provides a handy plug-in point for power tools and other equipment.  You can't always rely on an established power grid on the younger colony worlds! 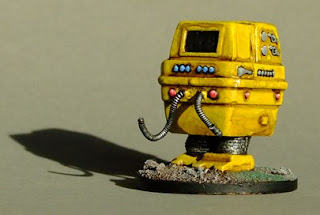 This particular droid is in use on the planet Hope in the Virtue star system..  Terraforming is still in progress on Hope.  Although the atmosphere is now breathable, it has not yet reached the level where strenuous work is possible without help from a breath mask.  Here you see the droid alongside a terraforming technician with his oxygen mask.


I'm sure most of you will have recognised the Star Wars power droid I used as the basis for this model!  I cleaned up the flash and mould lines before drilling a couple of holes in the front and adding the guitar string manipulator arms.  The base was trimmed down and it was re-mounted on the same size base as my other larger figures (eg. armoured fighting suits and weapons teams).

Following the recent change of government on the agricultural world of Charity, the so-called "Charity Freedom League" have suspended all food shipments to the neighbouring worlds of Faith and Hope.  Unwilling to use their troops against their own people, the triplanetary government has requested a peacekeeing force of Neo Colonial Commonwealth marines to safeguard their few remaining food collection centres on Charity.  These centres are located in the more marginal areas of Charity, mainly the equatorial desert regions.  The CFL has not yet taken these areas, concentrating instead on cementing their control of the more productive northern and southern agri-belts.  They have wasted no time in forming a citizens militia known as the "Armed Forces of the Charity Freedom League", of AFCFA for short.  Though very well equipped, they are poorly trained.

A squad of NCC troops has been assigned to each food station to watch the food stocks until transport ships from Faith and Hope arrive.  At one isolated outpost, Sergeant Inglis notices that the local civilians have suddenly disappeared, leading him to suspect that trouble is brewing...

As the Marine fireteams took position in the strong points of their base compound, green-armoured figures could be seen closing in from several directions.  It didn't look good and sure enough, a burst of fire soon spattered the wall around the forward fireteam.  They returned fire at their attackers, but were hit by incoming fire from another direction and one of the team slumped to the ground.


As more and more enemy units appeared on the rooftops around them, the second NCC fireteam took over, returning as good as they got from all sides.  Bullets and missiles burst repeatedly against the walls in front and behind them but miraculously they took no causalities, despite receiving fire from at least five different AFCFA positions.

As suddenly as it had begun, the attack stopped and the green-armoured AFCFA troopers vanished from the rooftops and streets around the compound.  It had been a brief but bloody action.  Private Ngoutu from first fireteam had only been stunned by the bullet and was ready for action once more.  After waiting a few minutes, there was no further evidence of enemy forces outside the compound.  A quick search of the area revealed blood trails leading from at least  four enemy positions and one very large blood pool which probably indicated a kill.  Shell casings and other battle debris meant that the marines were able to estimate an enemy strength of over 30, outnumbering their squad around 4 to 1.


Why had the enemy vanished after such a short engagement?  Perhaps they were just testing the NCC Marines' willingness to fight?  Time would tell...

This was a very quick Tomorrow's War game to fill in half an hour at the end of our Scout wargames day.  Only time for a single turn in the end but it was a chance to try out some extra background I've been working on, using 8 teams of well-equipped troops (+2D hard armour) who are poorly trained (D6 quality) against 2 teams of regular troops (D8 quality) with more basic equipment (+1D light armour).  Due to some very lucky die rolling the marines caused 7 or 8 casualties in the attacking force and only lost a single casualty themselves.
Posted by Paul at 18:53 4 comments: