Combat cyborgs are a smaller and less extreme form of militarised cyborg.  While an Assault Cyborg towers over a normal human and is considerably more bulky, a Combat Cyborg is little different in terms of build and height to a human wearing full body armour.  Although these smaller cyborgs do not carry as much armour as their larger companions, they are still far tougher than a normal human, and with built in medical systems they are capable of surviving injuries that would incapacitate anyone else.

Although physically smaller and less overpowering than the big Assault Cyborgs, Combat Cyborgs have the potential to be just as problematic politically.  Though their general deployment is not as difficult, their smaller size lends them to a covert role that can have major political ramifications.  Rumours of Cyborg "kill squads" being released behind enemy lines have the potential to bring any military force using them into disrepute.  Lightweight Cyborg support units operating in a warzone with their unaugmented counterparts are generally considered acceptable; undercover assassination units operating in civilian areas with the potential for huge collateral damage is another matter altogether.

My Combat Cyborgs will be analogous to a human in light powered armour.
They will generally be of high quality and high morale.  Although it doesn't always follow that more money equals better quality, cybernetic troops are so specialised that in this case it is true.  Cyborgs naturally tend to feel superior to normal troops and are aware that they can take significantly more punishment.  They will also tend to be confident in their own abilities and weapon systems.

Optional extras:
Some Cyborgs have retractable blades or other weapons built in to their bodies, these will count as Natural Weapons, giving a bonus die in close combat.

I've painted the cyborgs in my usual brown with black wash, grey & green drybrush camo so that they match my NAC Marines & their associated vehicles.  They've all been mounted on washers to match my other figures.

Having opted for 2 squads of 4, I have a couple of cyborgs left over.  One is red, a tribute to the old Palladium Rifts Red Borgs.  This could end up as the main protagonist in a game, an elite enforcer leading a group of lesser troops in some nefarious purpose.

On the other hand, my blue cyborg is likely to end up supporting some security forces, perhaps on an isolated backwater world where law enforcement will need some extra muscle.
Posted by Paul at 17:13 2 comments:

Some more figures from The Scene, 3 male zombie hunters/survivalists.

Loads of detail, though the similarity of the basic figure is obvious when they're all standing together.  Still, when mixed in amongst plenty of other civilians they'll be fine.

Now I just need to paint some more zombies for them to hunt!

First an apology for misleading you - the fellow on the left isn't a head swap at all, he's just a Rebel Minis street punk (can't remember which pack he came from) that I though I may as well throw in with the other two.

The real subjects of this post are a pair of GZG armed colonists/civilans from SG15-V07 and SG15-V08.  I've used a couple of the gas mask heads from SG15-XH2.  Existing heads were carefully cut off and saved for re-use elsewhere.  A hole was drilled down into the torso and the head clipped from its sprue leaving a 5mm stalk to drop into the hole.  A blob of epoxy resin to seal it in place and it's all finished. 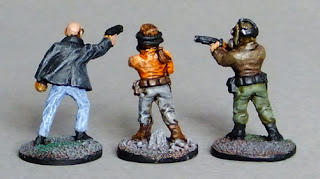 I'm particularly pleased with the way that the aiming figure has turned out.  Rather sinister... 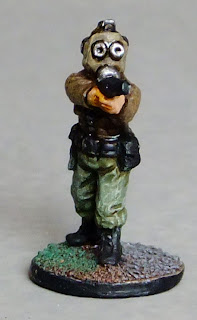 I have used Ground Zero Games' SG15-HW1 generic heavy weapon crew in field caps as civilians.  They're the sort you often see working around a starport moving goods about the place.  Safety is important, note that the chap on the right is wearing his steel toecap boots!

They've been painted in the usual mix of Vallejo, GW and Humbrol acrylics, shaded with Vallejo sepia ink.

They'll mix well with my other GZG civilians/colonists.  I have some more to paint, I might try a couple of head swaps with them to add some variety.
Posted by Paul at 23:41 2 comments:

Today we have 3 ladies courtesy of The Scene's survivalist/zombie hunter range.


Excellent figures, lots of detail, no flash, only very faint mould lines to clean up.  Pistols are perhaps a little on the large side but perhaps they're using Colt 45 longslides!


As you can see, they are a close size match with GZG figures so will mix in well with all my GZG colonists/civilians.
Posted by Paul at 18:20 2 comments: