The next entry for the objective marker competition was based upon one of my favourite adverts of all time - the Boddington's ice-cream van. 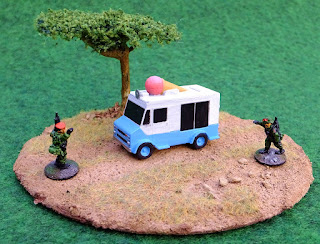 I used the base with tyre tracks which I'd made specifically with this scene in mind.  The ice cream van was a 3D print file which I reduced to 6% original size.  The tyres were reduced in size to fit the wheel arches, then increased to 200% width to make them suitably chunky.  Rather than fiddle around with axles, the wheels overlapped slightly into the body to ensure they were firmly attached. 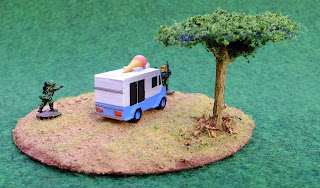 Thanks to the YouTube pause button, the colour scheme is fairly similar to the Boddington's ad van, allowing for the slightly different shape.  Ideally I would have added some ice cream pictures and a "SLOW - CHILDREN" sign on the back but I didn't feel my painting skills were up to it under the time pressure. 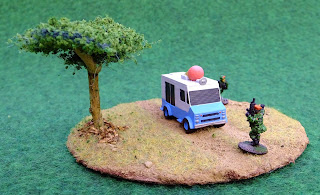 There are a couple of other versions of the van available with a hot dog or a burger on top, so they might be making appearances in my sci-fi games some time.  ("Myceli-yum! Mycoburgers are what a fun guy eats!")