Although tracked gunbots are an effective anti-personnel weapon, larger vehicles can present more of a challenge.  The Mobile Autonomous Weapons Platform (Tracked) is a means of delivering heavier firepower to the front line without the expense of a manned armoured vehicle. 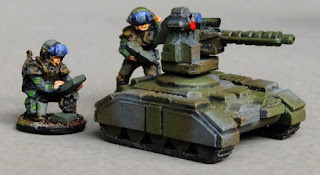 Carrying a light plasma cannon, it is capable of taking on light and medium armoured vehicles and is highly effective against infantry and powered armour.  The large track unit gives a low centre of gravity and makes for a good fire platform.

The MAWP(T) is capable of carrying a range of alternative weapons mounts.  While anti-armour missile pods and tribarrel guns are the usual options, other systems can also be substituted. 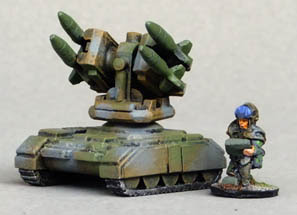 Air defence missiles are not usually fired on the move, but using the track unit from a MAWP(T) makes it much easier to position them without the need for a larger transport vehicle. 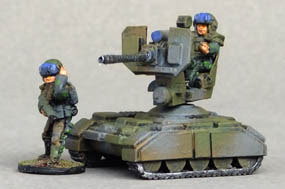 A Heavy autocannon is more usually seen on a fixed groundmount, but this can also benefit from the ability to change firing positions quickly and easily during a battle.

I will be treating this as a light vehicle under AI control rather than an infantry unit type robot.

*This is for the standard Plasma-gun equipped version.  Because they are more commonly found as fixed groundmount units, the missile or autocannon weapons carriers have the "Fire-or-move" attribute.  Missiles make the battlefield a Medium air-defence environment.  The autocannon has the following stats: Light autocannon (TL2 AP:4 / AT:2(L).  Because of its non-standard fitting, the autocannon is mounted in a "slow turret" (-1 to all reaction tests after the first in a turn).
Posted by Paul at 17:53