On patrol on Gordon's Gamble 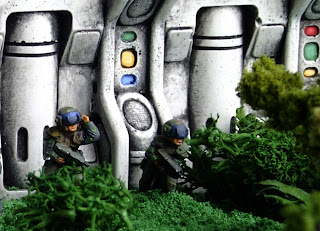 Recent civil unrest on Gordon's Gamble means that the Marines from Task Force JUNIPER undertake regular patrols to assist the planetary security forces.  Here a couple of troopers move through undergrowth on the outskirts of a small settlement. 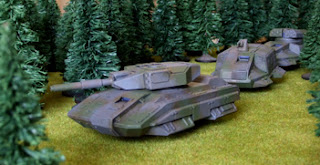 Occasional armoured sorties through the forest also serve to "show the flag", discouraging rebels from operating too close to major population centres or transport arteries.

A couple of pictures I've had knocking around for a while but I don't think I've posted them before.  Marines from GZG, grav armour from Old Crow.
Posted by Paul at 18:52