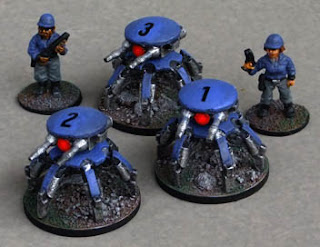 The Gordon’s Gamble colonial security forces are generally more than capable of dealing with any civil disturbances they might encounter. Unfortunately there is always the possibility of something out of the ordinary happening, so it’s good to have strong back up when you need it. The Spider Drones are kept locked in their bunker until needed, and the decision to use them is not taken lightly. Although the security forces have the ability to activate the Spider Drones, this would not be done without release authority being granted by the Colonial Governor.

Their 6 legs enable them to move at high speed over very rough terrain, and their sinister appearance is often enough to quell unrest without the need for shots to be fired.

If the worst does happen, their twin-cannon rapid-fire railgun armament is more than capable of suppressing angry armed mobs or destroying light vehicles. Their most likely use is to engage the offworld bandits or pirates who sometimes strike isolated colony worlds like Gordon’s Gamble. Anything larger than the Spider Drones can handle will need full military action, and at that point it ceases to be something for the security forces to worry about.

Note that as a paired wepon system, the additional gun mount will add a further die to firepower.
Posted by Paul at 23:10