Reports are coming in of a major air disater on Gordon's Gamble, possibly involving a DropShip from Task Force JUNIPER.  Their official spokesman has refused to comment other than to acknowledge that they have forces operating in the general vicinity of Olbuck Reach, a small settlement in the equatorial desert area of Gordon's Gamble, though they maintain that this is merely part of their general patrol pattern in the area. 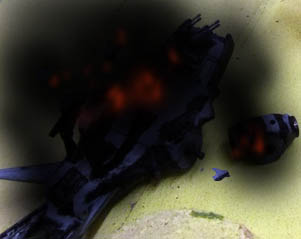 Rebel forces claim to have shot down a DropShip during an ambush, and have provided this picture as evidence.  Although the veracity of this cannot be confirmed at present, key task force personnel have been recalled from leave and all facilities are at a heightened level of alert, all of which lends credence to the Rebels' claims.

We will bring you more news on this breaking story as it comes in.
Posted by Paul at 22:19