The Great Rationalisation of '21: Ramjack APCs

My Epic Imperial Guard had only 3 Chimera APCs for transport, woefully inaquate for 300+ people.  I had looked at Chimeras on eBay but they were prohibitively expensive, usually working out £3-4 per vehicle from those I failed to win.  Enter the Ramjack APC from Dark Realm, these looked like they'd make suitable stand-ins, presumably pressed into service from a local source. 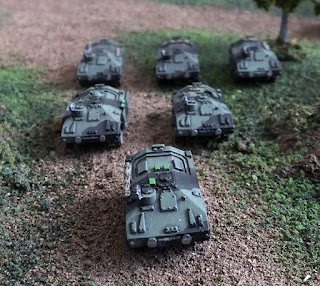 The Ramjack is an 8-wheeled APC armed with what looks like a cupola mounted heavy bolter, so more lightly armed than a Chimera.  I modified all the vehicles by adding litle bits of stowage in the form of plasticard scraps (becoming stowage boxes, applique armour etc) and Milliput (bedding rolls, tarpaulins etc).

These turned out nicely and I have a total of 12 which will enable me to transport a sizeable part of my force.  Now that I have a 3d printer, I can produce my own Chimeras but these filled the gap very nicely and are wonderful little sculpts.  The 8 wheeled chassis comes separate from the hull which allows for a nice amount of detail on the model but they're very easy to put together.  They currently seem to be out of production but hopefully they might appear again some time.