Getting on for 10 years ago (judging by the postage marking on the box) I got some walls from ebay.  They seem to be some sort of white resin and most had been painted bright red.  I've no idea of their origin, whether they came from a particular company or someone casting from their own home-made moulds.  The quality was variable with some poor casting in places and a few bubbles but overall I was pleased and I think they only cost me something like £5-6 including postage.

I made a start on painting them, spray undercoating in grey and drybrushing the wall a duller brick red and the coping stones a brown/grey concrete colour.  This left the grey in between the bricks to look like cement.  I only got part of the set done, then they were put away and forgotten about...

I found them again a couple of years ago and put them in my general 15mm scenery box.  They made a brief appearance in Escape From Zombie Island 2019 where their thin profile, uneven edges and lack of bases made them constantly fall over, reminding me why I'd put them away in the first place!

Basing my hedges using thin foamex had worked well, so a rootle around in my supplies turned up a small sheet of 3mm onto which I was just able to squeeze all the bases.  I grouped some of the straight sections into pairs to make double-length walls.

The walls aren't exactly 15mm scale, maybe 1/72 instead.  A 15mm figure standing up straight could probably just peer over them but adding bases to the walls may completely block LOS.

The bases were easily trimmed out of the foamex using a sturdy craft knife. I considered whether to cut off the overhanging joints of the walls and glue back onto the opposite end to make them neat, flat-ended but in the end, I left them as they were. Cutting, gluing and blending in all those little pieces would have taken ages and life's just too short!

The edges of the bases were chamfered and cut into a slightly more irregular edged shape.

With the bases added, the walls are just a touch taller than a 15mm figure.

I used "Hard as Nails" adhesive to stick the walls in place.  When the walls were cast, they were either underfilled or the resin shrank a lot, some were 2 or 3mm short at one side or the other.  The underside of most walls was concave, so the nice thick adhesive filled the gaps and ensured a firm bond, also levelling up the worst of the uneven bottoms.  It also helped conceal the gaps between the 2 parts of the double-length walls.

After basing, the bases were painted with burnt umber acrylic.

The walls were painted with burnt sienna, then individual bricks picked out with burnt umber, taupe and ochre.  The coping stones were painted with taupe.  I mixed up a brown/black wash with some matt acrylic varnish and applied it over the whole of the walls which toned the brighter colours down and hepled tie everything together. 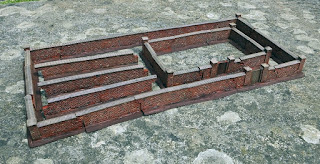 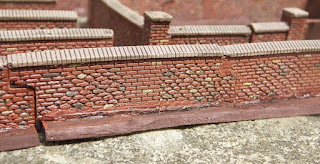 I had been planning to dust some pale tile grout over the walls and then wipe off with a damp cloth to leave mortar lines between the bricks but I decided that they actually looked pretty good as they were.  PVA was painted over the bases and they were dipped in a tub of sand and brown tile grout. This was sprayed with isopropanol then a thinned PVA and matt varnish mix dripped over to seal it.

The final stage was more PVA, then a sprinkle of dark green flock followed by finer, lighter green flock and last of all, a few green dyed tea-leaves.

The isopropanol/PVA and varnish stage was repeated to finish everything off - or so I thought...

After looking at the end result in better light, I decided that I did need to do one more thing, just a quick drybrush over all the walls with some Humbrol desert sand to give them a faint dustiness and matt down the faint shine that even supposedly matt varnish sometimes seems to have. 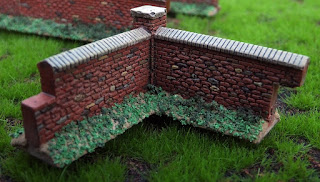 These walls should get a few more outings now that I know they aren't going to fall over every time I try to use them!