We've been having a massive clear out at work and among the piles of rubbish and recycling were these desk raisers.  You know the sort of thing, you stick them under the feet of your desk to make it a bit higher if the built-in adjustment isn't sufficient.  Anyway, I saw these and instantly thought "They'd make good 15mm buildings" which is possibly rather sad but there we go.

Some will need a bit of a wash because they're covered in crumbs, coffee splashes and bits of fluff but once that's done they'll receive some windows and doors and perhaps a few roof-top gubbins. They're made of a very sturdy, rigid plastic that should take paint and glue well.  What's more, they stack very neatly. 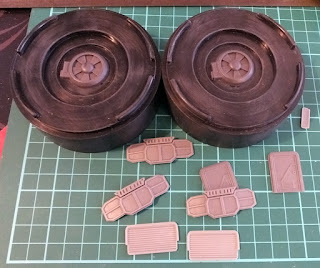 Windows will be some of Antenocitis Workshop old 15mm sci-fi ones, now sadly out of production.  I'm going to heat them and hold them in place so they conform to the curve of the desk-raisers, then glue them in place once they're cool.  I've had them for ages and never got around to using them so it will be good to finally justify their purchase!  Doors are also Antenocitis Workshop OOP 15mm resin items and I'll either file a flat patch into the curve of the desk raiser or possibly just glue the centre strip of the door onto the curve, then fill in around the edge of the frame with epoxy putty. 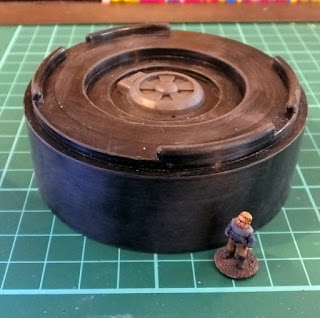 Roof gubbins will include aerials/comms dishes plus an assortment of pipes and boxes made from guitar strings, wire, small lego bricks.  I also have some OOP AW 15mm hatches or ventilation fans which will sit nicely in the middle of the roof, I've already glued a couple in place.
And there we are, 8 super-budget offices/homes from recycled junk and a few add-on items. 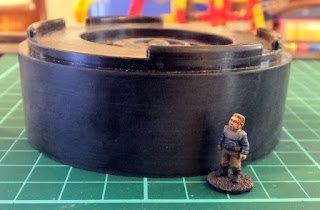