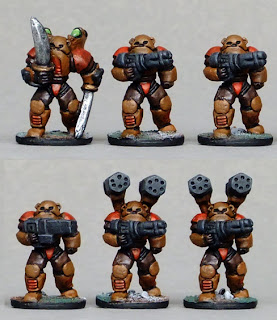 As you can see, we have a squad leader with a couple of very chunky swords.  They have small cables running into them so presumably they are power swords/vibroswords or something similar.  He also has 2 banner-styles fins containing sensors and communications gear.  Next in line are a pair of identical troopers armed with tribarrel support weapons, making good use of the power armour's extra load-carrying capacity. 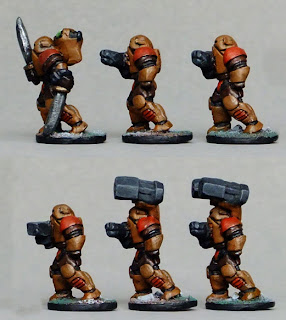 The bottom row comprises a trooper with some sort of square-barrelled heavy weapon.  Maybe it's some sort of heavy flechette gun or launcher.  Finally there are a couple of troopers armed with paired shoulder-mounted missile pods which are obviously the same as the single hexagonal-fronted one carried by the heavy weapon trooper in the normal infantry set. 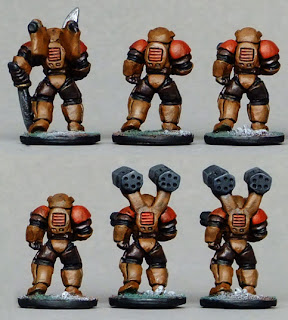 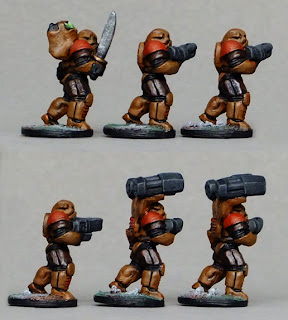 The commander has the little sensor windows on his back fins detailed in green for a bit of contrast. 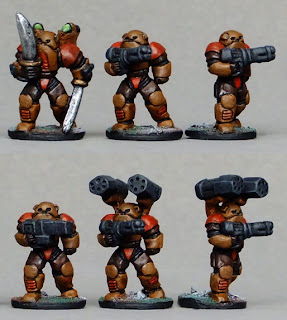 Finally a comparison photo so that you can see how a normal trooper measures up against one in power armour. 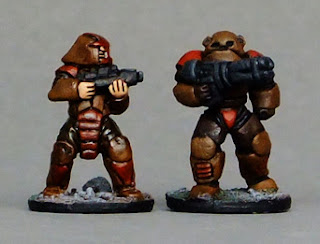 I've seen several other reviews where people have commented on the "teddy-bear" shape of the helmet!  They are quite cute.
Posted by Paul at 23:34