IMEC often make use of Mining Robots on frontier worlds.  They're able to handle rougher terrain than a wheeled or tracked vehicle, and are more flexible for use in other tasks, able to stand in for a crane or a cargo loading droid without much modification.  Most come equipped with a triple-headed rock drill and a large rock saw (also handy in forest clearance). 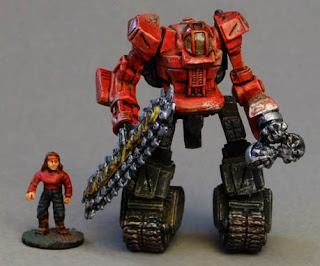 This robot started life as a Mechwarrior clicky figure.  I ended up with 4 mining 'Mechs from e-bay, so far one has been painted up to see how it looks.  I haven't yet decided whether they are piloted robots or whether they're autonomous/remote controlled droids.  As you can see, this one still has the cockpit canopy, though it wouldn't be too hard to replace it with some sort of robotic head. 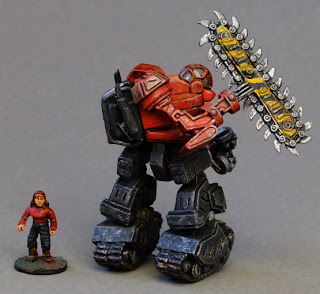 The rock drill arm received an IMEC logo, though I've rather overdone the weathering so you can hardly see that it's there! 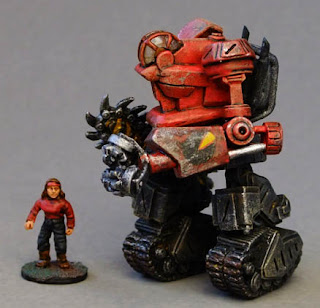 Here's a few of the crew with their mining robot & some transport. 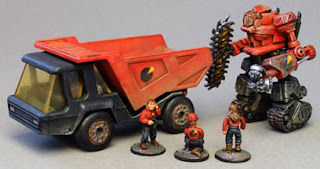 The transport can also help the robot reach its destination faster than walking... 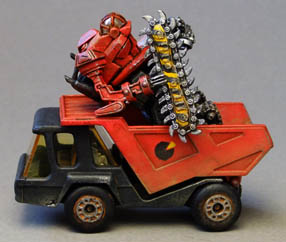 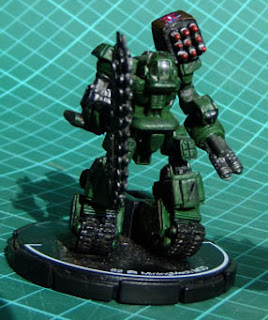 Some of the mining 'Mechs come with jury-rigged guns instead of the rock drill.  These guns might be useful mounted on something else, as will the missile pods.  I've got a few broken drill-bits, so they will be good replacements for the gun mounts.  I might give one a claw or scoop of some sort too.
Posted by Paul at 17:03