I started building these DLD Kamodo vehicles months ago - see my earlier post from June! I've finally got them finished, and also built a third one which I saved so I could do a more in-depth review of the kit. 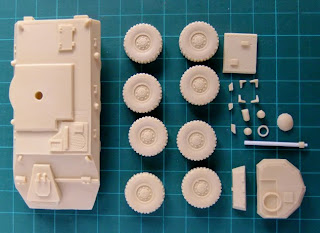 Here you see all the parts for a Kamodo ICV (Infantry Combat Vehicle) after trimming/sanding and a good scrub with a toothbrush & washing up liquid. The collection of small parts on the right includes smoke launchers, gunnery sight, periscope, IFF transponder and attachment ring, turret hatch cover, gun barrel and 4 stowage brackets. They come still attached to a thin sheet of resin so you can be sure you've got them all, but they are a bit fiddly to trim. The wheels appear to have been copied from the Revell 1/72 scale Fuchs APC, but as these are some of the best wheels I've come across on a model, that's not a complaint! Some parts are pre-assembled; the gun barrel and the turret (you can't see from this picture, but the turret pin is already fixed in place underneath so that you can guarantee it sits in the right place on the main hull).

The main hull and turret had a few small resin granules scattered alongside detail areas, presumably from small bubbles of air getting trapped when the original mould were made, but these were few and far between. Overall, the quality of the castings was excellent, especially the detail on the wheels (though more cleaning up was required here. 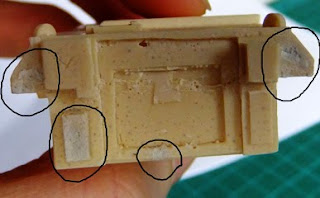 What I wasn't quite so impressed with was the amount of bubbling around the back of the vehicle. I assume that it is cast in a mould standing on its nose, which is why all the bubbles have accumulated at the back. They'd been poorly filled with a slightly granular filler, and I ended up re-filling them. I should point out that the vehicle has been designed so that the main hatch covers most of the rear, which helps hide all the bubbles in the middle part, and on the whole I was very happy with the quality of finish. 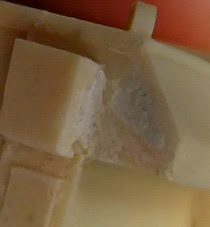 A close-up of some of the bubbles/filling. Detail on the rear of the model is not as clear as on the sides or top. It might have been better to have the rear stowage boxes as separate items to attach; that way, they'd have had better detail, and would have helped cover up some more of the bubbles. 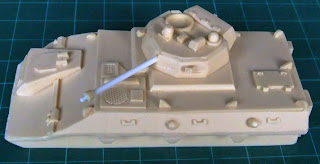 The basic hull & turret assembled. Wheels have been left off to aid painting, as suggested on the instructions. You can see the collection of detail parts mounted on top of the turret, and two of the stowage brackets alongside the turret. I found that the stowage bin on the turret rear didn't really look right when attached, but it has been attached correctly. The instructions are very good, clear and concise on the whole. Just a couple of the parts were hard to differentiate - I ended up looking at the pictures of the 25mm scale versions on the DLD web site to make certain I had them in the right places! 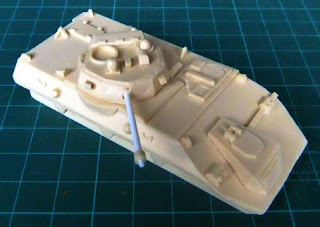 Another view, this time from the other side. The number of tiny pieces to attach seemed unnecessary, I'd have thought that the stowage brackets and the IFF transponder and the ring that it sits in could all have been moulded on without too much loss in detail. I've left the turret hatch off for the time being, as it is just a plain domed circle with no other detail. I'm going to give it a better one, either making one from plasticard or using a spare vehicle hatch from another kit (Old Crow APC or a JB Models M113 ACAV seem the right size). It will probably be fixed in an open position, with a crewman peeping out. 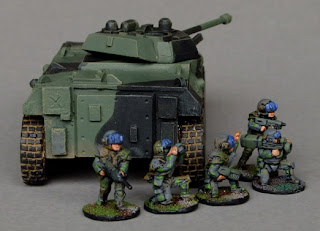 The finished item plus a part-squad of GZG NAC dismounts. You can see that once it has been painted, the cleaned up rear of the hull looks fine. The turret stowage bin still looks slightly odd, but the painting does help bring everything together. 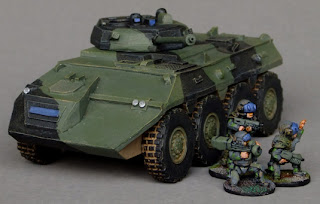 A view from the front. I will probably add more detail to these, including some stowage (jerry cans, bedding rolls), and probably some small gun barrels for the little blisters on the side of the hull (these are supposed to be built-in gun mounts for suppressive fire). The smoke launchers on the front faces of the turret are a little disappointing, so may get replaced with new ones made from bundles of short brass rod scraps.

I also have a Kamodo HFS (Heavy Fire Support?) to support my two ICVs... 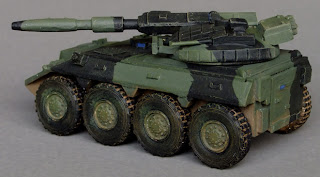 Overall quality and ease of construction was much the same as the ICV. 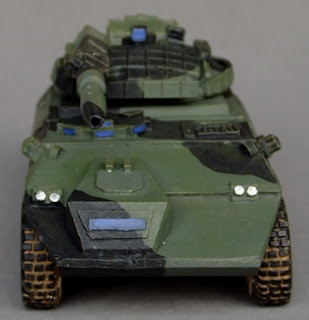 The smoke launchers were much better than those on the ICV. 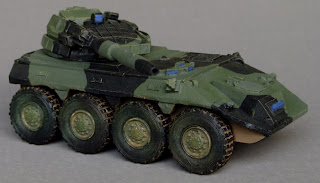 My rating for these kits will be a B-. Finished appearance is very good, and amount of detail is great, but construction is fiddly at times despite good instructions. I'm pleased with the finished result, they're a fine addition for a near-future force.

*Additional note: I've had a couple of queries now on whether DLD are still in business. I don't actually know - his web site is still up & running, but I have heard from someone else that orders are taking a while to get processed. I was lucky enough to get my 3 vehicles second hand, so I don't have any direct experience of ordering from DLD. I'd suggest that you drop DLD an e-mail direct from the contact button on their web site.
Posted by Paul at 10:41