After playtesting my new cavern system, I decided that there was something I particularly needed - some sort of objective markers. I could produce some sort of cardboard counter, but I'd like something a little more satisfying and three-dimensional on the game board. As our first game involved some NAC Marines penetrating a nest of GZG xenomorphs and QRF small aliens to destroy their egg chamber, this seemed a good excuse to try my hand at sculpting some leathery, slimy egg clusters.

As I use 1p and 2p pieces for basing many of my larger 15mm units, I've decided to follow this through into my objective markers. A Sunday afternoon with some plasticine and old guitar strings gave me a couple of objective marker masters. 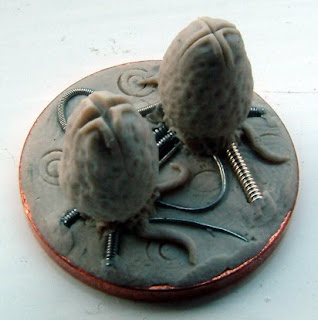 The 2p piece has 3 eggs, the 1p piece has just 2 eggs. I may produce a single egg on a small washer the same size as the standard GZG bases, but I'll see how these larger ones turn out first. 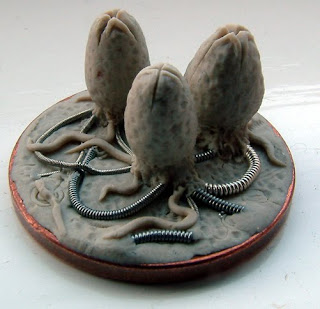 The coins were given a thin coating of plasticine as a base. Various different thickness guitar strings were cut into small sections and set into the plasticine, giving the effect of leathery organic conduits in the Giger-esque "biomechanical" style. The eggs were rolled from plasticine, with the cross-shaped opening created using a craft knife, and the mottled texture added using a fairly blunt pencil tip. Here is another picture ofo the egg markers, this time with a GZG explorer for scale. 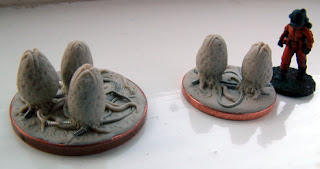 Moulding
The Old Buckenham Bone Crushers bought a can of RTV silicone to try making some moulds. I've already created one set of moulds, but this is the first time I've tried making a mould of something that I've actually sculpted.

The first thing to do was create a container for the silicone. I built a couple of small square walls out of lego bricks, and cut a square of plastic (the sort of semi-rigid stuff from blister packaging) to pop in the top of each. I'm using a glass placemat as the working surface for my moulding, as it gives a clean, smooth surface from which cured silicone can easily be removed - whether as moulds or as accidental spills!
After weighing out 100g of silicone using a set of jewellers scales (our kitchen scales aren't precise enough!) and adding 5g of catalyst, I gave the mixture a good stir. The silicone was carefully painted onto the eggs bases with an old modelling paintbrush, making sure that it got into all the nooks and crannies round the base of the eggs and along the guitar strings. As the silicone is the texture and thickness of golden syrup, this can be rather difficult!
Once this basic layer was in place, the Lego surround was placed over each egg cluster, and more silicone poured in to fill the mould to within a few millimetres of the top. Finally, the plastic square was placed in the top. When these moulds are ready for casting, the top of the silicone block will become the base of the mould, so it's important that it is completely flat and a stable base for casting. 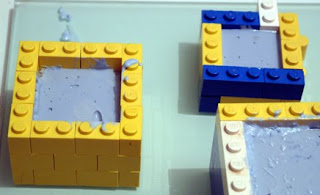 De-moulding
The silicone was left for about 24 hours to cure completely. I've been using a slow catalyst so that the liquid rubber remains workable for a longer period. The Lego surround is disassembled, the silicone is pulled free of the base, and it's the moment of truth...

The masters came to bits as they were removed from the moulds, but I was expecting this - I gather that many masters don't survive the moulding process. As my masters are only plasticine, I knew the eggs would come off the base at the very least - but being plasticine, I can recycle them into more sculptures for another occasion.

I'll make a few trial castings and try to get them painted in time to post some images for next time!
TTFN
Paul
Posted by Paul at 17:47