I've got a number of "generic desert buildings" but something that often seems to crop up in adventure stories (and also quite a few modern military memoirs) is the ancient "desert fort".  Whether the decayed remnants of the old colonial rule or the crumbling remains of old tribal centres, they provide a good contrast to the better-kept inhabited towns.  I decided to build a few ruins with some Hirst Arts "ruined fieldstone" blocks.

I've built 3 sections of ruins to start, 1 small, 1medium with an archway to add a little interest and a larger section which can provide reasonable cover to a vehicle.  I bought a bag of builders' sharp sand probably 15 years ago and it's still serving me well for terrain building.  It was sieved into 3 different grades: fine (mix of dust and very small grits), medium (approx 1.5-2mm granules) and coarse (3-5mm pieces).  Bases were cut from Foamex board.

I needed something stronger than PVA to fix everything to the Foamex, so the Hirst arts blocks were assembled using 151 "Hard as Nails" which is the sort of no-nails stuff you dispense from a sealant gun.  I've found this is particularly good for the fieldstone blocks where you can end up with gaps if you aren't careful.  Layers of the adhesive were also used to delineate the crumbled/robbed away sections of wall between the Hirst Arts blocks, with some of the coarser stones from the builders' sand used for texture. 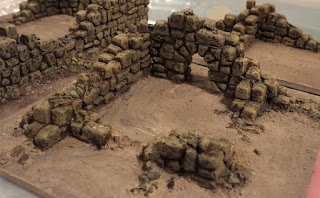 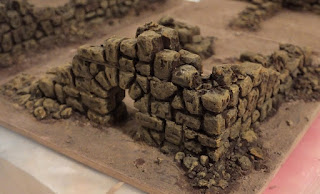 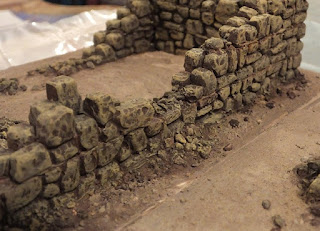 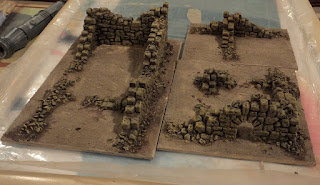 I wanted a bit of contrast between the walls and the desert, but also colours to tie them together.  The desert is, appropriately enough, a Wilkinson's tester pot of "Safari Sand".  This turned out to be a poor idea as I shall expand upon later.  Walls were base coated with burnt umber craft acrylic, drybrushed heavily with a dark yellow, then finished off with the Safari Sand.

This work was completed a year or two back but having used the scenery in a game, I decided that the ground colour is too pale and makes it feel out of place amongst the other desert buildings.  As my recent blog posts have shown, I've been trying to improve my scenery techniques so I decided to revisit the ruins and make some modifications.

The first thing to do was reshape the bases and bevel the edges. The bases were repainted using the same mix as my other desert bases, Wilko "Nutmeg Spice", "Coffee" patches and a heavy drybrush of "Desert Sand".  PVA was painted around the edges of the ruins to attach the coarser clumps of foam foliage, then green dyed tea-leaves generously sprinkled on and around to blend them into the bases.  Dilute PVA was dripped on to soak in and set everything in place, with a sprinkle of autumn grass here and there as the finishing touch. 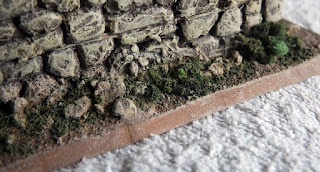 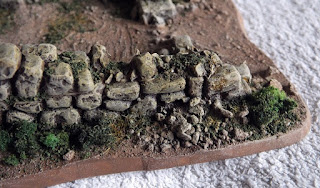 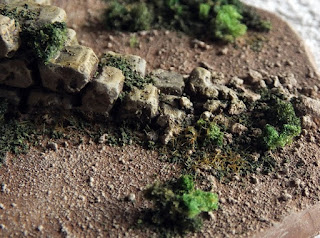 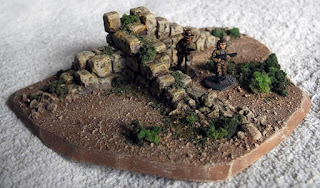 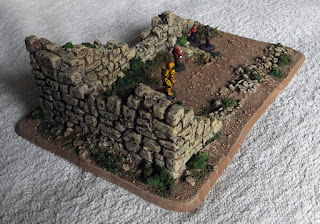 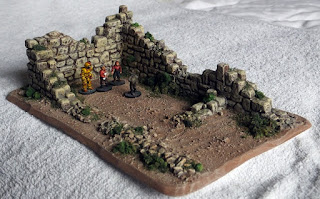 It's ended up slightly more overgrown than I originally intended but that's OK.  The vegetation also helped hide a couple of places where there were air bubbles in the plaster cast blocks.