Well, my computer has decided that its keyboard is only going to work about 5% of the time, which has rather delayed any further blog posts.  Today is the only ocasion that it's worked first time in over a month!  To make things worse, the USB adapter on my spare keyboard has stopped working too.

Fortunately I'll be able to collect my spare spare keyboard from my parents' house in a couple of weeks.

Added to that, someone managed to drive into the back of my car, which wrote it off, so much of my spare time has been spent trying to sort out a replacement.

Normal service will be resumed as soon as possible.  More Oldhammer to come plus some 15mm projects.  Sneak preview of a 15mm zombie game report below... 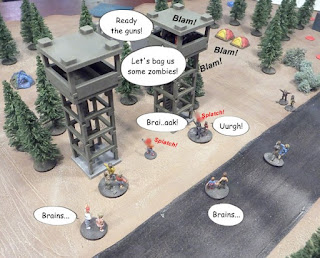