Something I've been planning for a long time is the recreation of the Red Shadows in 15mm.  "Who are the Red Shadows?" many of you may ask.  Red Shadows are brainwashed troops who selflessly devote themselves to the service of their mysterious master, Baron Ironblood.  They were the enemies of Action Force (which later merged with GI Joe) and wore a sinister red uniform with black accoutrements. 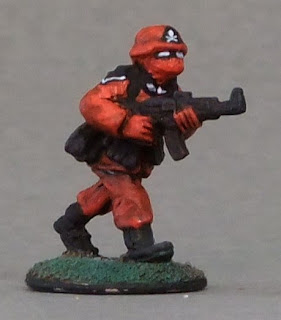 My standard troops will carry an assault rifle, squad leaders an SMG, special weapon troopers a machine gun or a missile launcher (slightly larger and more powerful than a standard LAW). All carry grenades as standard. Because of their brainwashing, Red Shadows are fearless in battle, they have high confidence and high morale, rarely retreating - and only then because of reasons other than their own safety. 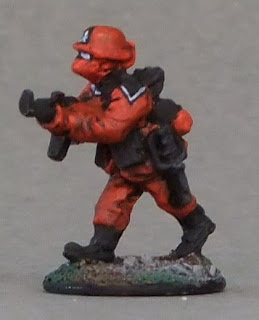 As you will no doubt have guessed, there are WWII German infantry, late war troops with the MP44/StG44 assault rifle.  I've modified the helmet with some fine white milliput epoxy putty. 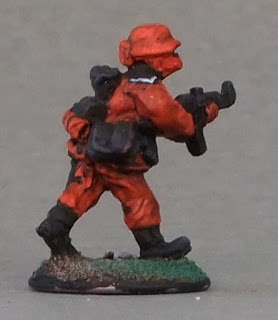 The original Red Shadow figures used a "German stormtrooper" as their basis, the only difference being the altered helmet design and the new colour scheme.  They still carry the stick grenades, canteen and cylindrical gas mask case of the original figure. 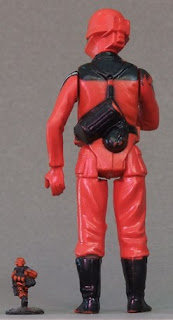 I've opted for a GW red gore base coat with Vallejo sepia ink wash for shading.  The black parts (boots, webbing, weapons) have been drybrushed with Humbrol 32 dark grey to make the details a little more visible.  Other markings have been painted very carefully in white using an extremely thin brush.  I wasn't sure how well the skull and crossbones marking on the helmet would come out but it's worked fine (even if I missed out the black eye sockets).


The skeletrons that appeared in a previous article will form expendable robotic auxiliaries for my Red Shadow army.


I have 3 packs of troops to paint as Red Shadows, firing and advancing poses with StG44s plus officers with MP40s.  I shall add some support weapons with another order.  All I need to do now is decide on some vehicles.