I built this Mister Craft P51C Mustang Mk III back in July 2018 for Norjam, our big international jamboree organised by Norfolk Scouts and Guides, over 6,500 of us from across the world camping for the week.

The camp is broken down into a number of subcamps and this time the theme was "Decades".  I was on the 1990's subcamp with my Scouts and Explorer Scouts but in my role as one of the County team I built this little 'plane for the 1940's subcamp for their aircraft recognition activity. 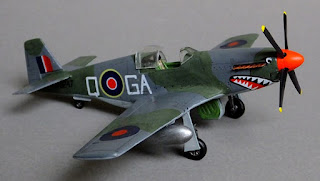 It was a very rushed build but I couldn't just construct it as the basic kit. 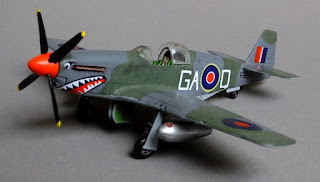 I chopped up the cockpit canopy and filed it down so that I could paint the interior. 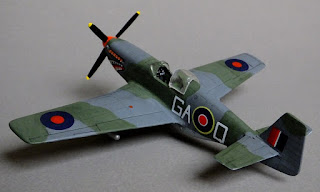 This aircraft has a "malcolm hood", a special bulbous centre section to the cockpit canopy which gives superior visibility compared to the standard canopy. 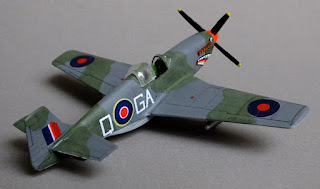 I carefully painted in some dials on the instrument panel and added some extra details such as the fuel filer caps on the wings etc.  I'm not sure all the detail is completely correct but I was too pushed for time to have a chance to research it fully. 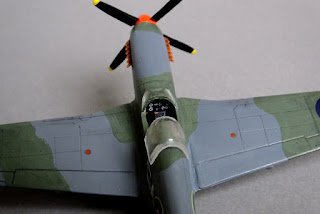 If I'd had more time I'd have made some metal foil straps for the harness but this time I just had to make do with painted-on ones. 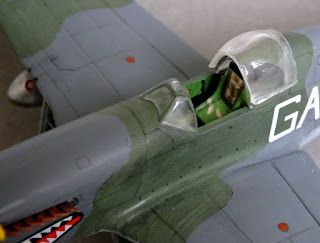 The instructions in the kit were pretty poor.  I had to ignore them when attaching the undercarriage - they showed it attached to the wrong sides! 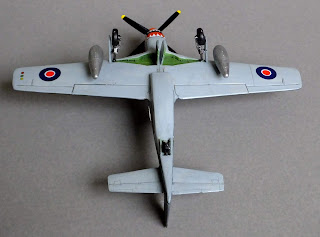 Alas the undercarriage isn't quite straight but I'm still happy with the end result.

The decals were something of a pain to apply, quite thick film so I needed lots of decal softener and adhesive to get them to conform to the curved surface.

I've painted this one as GA Q, flown by Flight Lieutenant Raymond Vincent Hearn DFC of the RAF Volunteer Reserve, based in Italy during 1944-5.  You can read more about him here and here.  He was shot down by FLAK in February 1945.  Being a Polish kit, there are are also a couple of sets of decals included for Mustangs flown by Polish pilots. 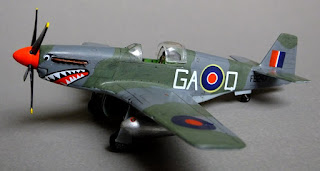 Although fun to build and modify, I don't think I'd recommend this "Mister Craft" kit.  The instructions were completely wrong in a number of places (I refer again to the fact they told you to fit the undercarriage the wrong way round) and rather ambiguous in others.  The fit of several parts was also pretty suspect and required clamping with clothes peg followed by copious amounts of model filler and extensive sanding to try and disguise the gaps.

After all this effort, it turned out that the 'plane was going to be suspended on thread from the inside of one of the marquees, way above head height so none of the detail I added was really visible!  Still, at least I knew it was there...
Posted by Paul at 22:31